Reverb is an effect that you’ll find in any mix, and you can never have enough options when it comes to crafting the right reverberation for the sound. That’s why I’ve scoured the web to come up with this list of completely free plug-ins you can try.

Some will say you can never get the same quality reverb with a free plug-in and others will say it doesn’t really matter, but at the end of the day it comes down to your taste and what sounds good in your mix. So, download a bunch and try them out! 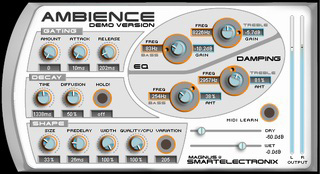 Ambience is a popular choice and many users consider it to be as good as a commercial reverb plug-in. Unfortunately, it does display a nag screen when you use it—it’s donation ware. It’s a small price to pay for a high quality plug-in. You’re free to use it as much as you want without paying, but if you donate any amount to the author, he’ll send you a version that doesn’t nag. Get this Windows and Mac OS X in VST or AU plug-in formats here.

DX Reverb Light is a simpler version of its non-freeware big brother DX Reverb. It’s pleasantly simple and a good choice if you don’t want to configure a hundred different variables to get your sound. It can be downloaded for the PC and Mac in VST, DirectX or SAWStudio plug-in formats here.

Classic Reverb is a smooth reverb with a GUI that emulates a knob-controlled rack reverb unit. It touts itself as being easy on the CPU. Get this Windows VST plug-in here.

This Windows plug-in provides a simple but high-quality reverb that allows you to visualize the reverberation parameters in a room simulation. It is available in VST and DirectX formats here.

This plug-in attempts to model not only the sound of the room itself, but the specific vibrations of the surfaces in a room, too. The sample files show it being used on a whole track rather than a single sound, and the result using presets that often sound terrible in other reverb plug-ins—such as Classic Large Theater—do sound pretty good. Get it in Windows VST format here.

OldSkoolVerb is a reverb designed for non-percussive, softer musical elements to provide extra ambience. It has a nice and simple interface and each knob is clearly labeled (a nice change!). It’s available as a Windows VST plug-in here.

According to OmniVerb’s product blurb, this free plug-in was voted as one of the best by Computer Music just last month—that’s a vote of confidence from a reputable source!

It has some great variables wrapped up in a simple interface. You’ll need to scroll down this page a bit to get this Windows VST plug-in.

Empire 2 is a very simple reverb unit, offering only a few controls. Not great if you like to tweak your reverberation down to the minute details, but if you’re looking for something nice and easy because you’re just demoing stuff at home to take into the studio later, or because you don’t yet understand the more complicated reverb units, this might be the one for you. Get this VST plug-in here.

This is a cool reverb unit, especially if you’re not the sort who likes to play with knobs (though it does have some). It allows you to model a room sound using virtual speakers and microphones—not bad if you’re trying to visually recreate the reverberation of a given room for a full band relative to the sound sources and microphones on each instrument. Get this Windows VST plug-in here.

Here’s an interesting concept: a reverb unit that models the reverberation of piano strings. It may not be an all-in-one reverb that you can apply to any instrument, but if you’re looking to try some different and unusual reverb effects, this might be the one for you. This plug-in is available for Windows and Mac, and in VST, MAS and DirectX formats here.

Here’s an ultra-simple reverb unit that was ported from Windows to Mac. Unfortunately, it’s not universal—it’s a PowerPC plug-in—but since many Mac musicians spent a lot of money on their PowerMacs and are putting off the switch to Intel I thought it was worth including. Scroll to the very bottom of this page to get this VST plug-in.

This plug-in is amazing: that horrendous array of knobs actually allows you to tweak the reverberation on each frequency band. It’ll take a few minutes to get over the sheer number of knobs to play with here, but once you do, you can get some crazy effects happening with Mechaverb. Get this Windows VST here.

Here’s a free one that works on Windows and Mac OS X and gives you some nice controls without overcrowding the plug-in with variables. I think the graphing and room visualizations are a nice touch that make it that much more easy to use. Check out KR-Reverb here—download it in VST for Win/Mac and AU for Mac.

SIR is an impulse-response reverb unit. This means you can record the reverberation in an actual, physical room and apply the same reverberation it produces using the plug-in on any other sound. Worth rebooting into Windows for if you’re a Mac user. Get the Windows VST here. 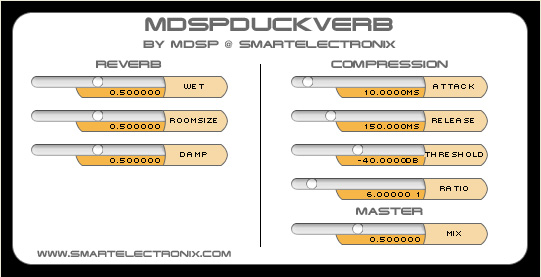 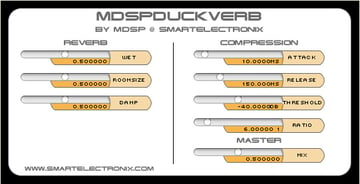 This reverb unit will compress the reverb output whenever there’s a certain level of signal from the sound source. What this means is that sounds that can become unintelligible with regular reverb retain their legibility instead of being washed over with reverberation as they get louder. Very handy, especially for vocals. Get the Windows or Mac OS X VST here.