Cubase is Yamaha's digital audio workstation, which is produces through its subsiduary company Steinberg.

It has been around since the '80s as a MIDI sequencer, but now also has a powerful audio engine for recording and editing, a rack full of effects, and a bunch of useful virtual instruments. The program is available for Windows and Mac, and costs around USD$500.

Last week's article covered Cubase's history and features. This week we learn how to use it. Here are 20 tutorials coming from Steinberg, Youtube and Audiotuts+.

This article was previously published on the AudioJungle blog, which has moved on to a new format in 2010. We'll be bringing you an article from the AudioJungle archives each week.

One commenter points out that the link below is broken. I'm unable to locate the videos on Steinberg's site - they must have been removed since the article was originally written.

Steinberg themselves offer some helpful video tutorials on Cubase. These include:

3. Cubase 5 Beatmaking with Groove Agent One and Beat Designer

"A nice quick and easy way to assign Midi Controllers to parameters in Cubase."

"In this video we take a look at taking a single mono vocal sample and using a couple tricks, we widen it out to make it sound like it is playing in full stereo. This sort of effect is great for adding body to your vocals or even moving a lead line so that it is not sitting directly in the middle of your tune!"

7. Cubase Tutorial: How to record MIDI data/ How to track your beats using MIDI

"Short tutorial for Cubase beginners. How to record, edit and draw your own automations. everything in this tutorial applies to Cubase SX3, Cubase 4 and Cubase 5."

"Back for a product review of my favorite DAW, Cubase 5. It's packed with new features and updates, from brand new functions to the heritage tools by Steinberg."

"LoopMash is a revolutionary virtual instrument that offers a unique and innovative way of creatively working with loops and beats to create stunning new rhythms and grooves." 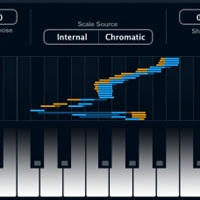 The new version of Cubase has landed with some pretty impressive new features that will be interesting to both new and seasoned users alike. Let’s take a look at a few ground-breaking features the new version has to offer and see if these latest additions keep Cubase up there with the other big guns. 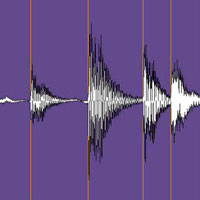 Whether you are working on a doubled vocal part, the drum track or a bassline, that one slightly out of time note just stands out and brings the whole production down. Of course we can always just go for another take and record the part again, but it may seem a shame to have to do that if the part is otherwise perfect, and sometimes it is something you only notice when the other musicians have gone home!

It may just be that you have a vocal part from another project that you want to use in a remix, and you want to change the timing or duration of some of the words or syllables. In this tutorial I’m going to take a look at the powerful Sample Editor in Cubase 4 and show how we can use the Free Warp feature to alter the feel of a vocal part and also to correct an out of time djembe recording.

16. How to Set Music to Film Using Markers & Timewarp in Cubase 4 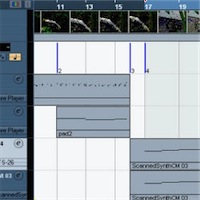 If you fancy having a go at composing music to film, one of the first obstacles you will encounter is how to synchronize the music to the action in the film. Whether you are using real or virtual instruments, you are going to have to make the music follow the picture, and if you are working to a brief they may specify exactly where they want sections of music to start and finish.

In this tutorial I’m going to look at how we can import such a film into Cubase 4 and compose some music for it. I’ve put together a short nature sequence with butterflies and a spider (this is not going to win any Oscars, but it will suffice to practice with!) and I’ve written an imaginary brief from a producer specifying what should happen at certain timecode points in the film.

17. How to Set Up Side Chain Compression in Cubase 4 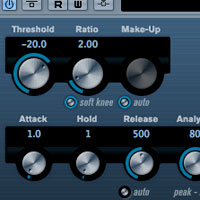 In past tutorials I have covered side chaining in Reason and touched on side chaining effects busses in Logic Pro, but after a few emails on the subject, I felt it was about time to cover the slightly less transparent side chaining method that Cubase 4 has adopted since the introduction of the VST3 protocol.

I’ll cover side chaining using gates and compressors for varying effects and results. Obviously this isn’t one for the more seasoned Cubase user but it seems there are still some people out there that are slightly baffled by the process. Hopefully this will clear things up for those concerned.

18. Using Hitpoints and Markers in Cubase 4 to Create a Tempo Track 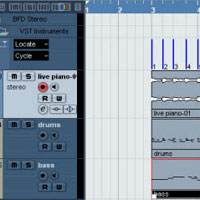 Sometimes when you are recording a new track it is good to turn off the metronome and auto-quantize using your software, just hit record, and play from the heart. A spontaneity and more human quality can be captured in the performance. This works particularly well with solo guitar or piano.

Or maybe you want to use some audio from a live recording or a studio session where no click track was used. When it comes to adding other sequenced parts to audio that has been recorded in this way it can be difficult to get the timing of the midi notes right. The metronome and auto-quantize will be out of sync with the audio. 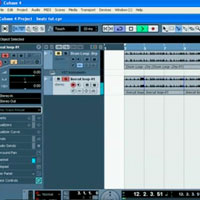 “Livecut” by Smartelectronix is a VST beatslicer effect. It re-arranges the incoming audio in real time and is a great tool for generating drum’n'bass type drum fills from existing audio or VST drum loops. However, the output can seem a little unpredictable. In this tutorial we’re going to look at using Livecut to generate some fills from an audio drum loop. We will then edit the results, and with a bit of cutting and pasting create something more subtle.

20. How to Create a Tape Stop Effect with Cubase 4 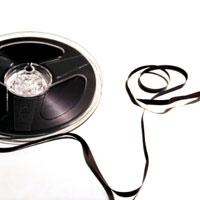 In this tutorial we are going to look at two alternative methods of creating the sound effect of a turntable or tape being unplugged and slowing to a halt within a music track.

You may have heard this effect on the vocals of the Black Eyed Peas song Hey Mama. Sid Vicious’ My Way also features the subtle effect of a turntable being turned off just before the song changes from the pompous introduction to the full blown punk section.

I’m going to start by doing something similar to the effect in the Sid Vicious song using some pre-prepared audio and Cubase’s pitch shift envelope tool, then move on to an electro track that I’ve prepared where we will automate the freeware plug-in Tapestop VST to slow down some vocals whilst the music remains unaffected.