America Dreaming is the title of this great song I produced for Tracii Guns, guitarist and founder of Guns N' Roses and iconic leader of L.A. Guns. It features the Italian band J27. The single will be released and available, both in US and Italy, in 2013. This article describes my experiences and approach recording and producing the project. 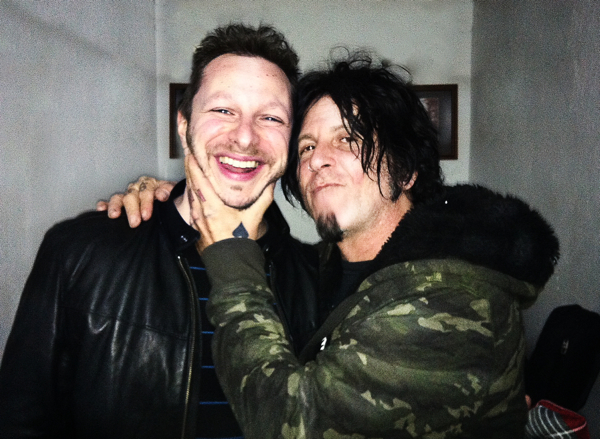 We decided not to go to a conventional recording studio for this project. Instead we choose to rent a beautiful farm in Tuscany, with open space and a breathtaking landscape. I was sure this environment would be a much more inspiring place to work in.

And so it was. Listening to the results I can tell it was the right choice. What we might have missed from not being in a world class facility has been replaced with an artistic value which is priceless. 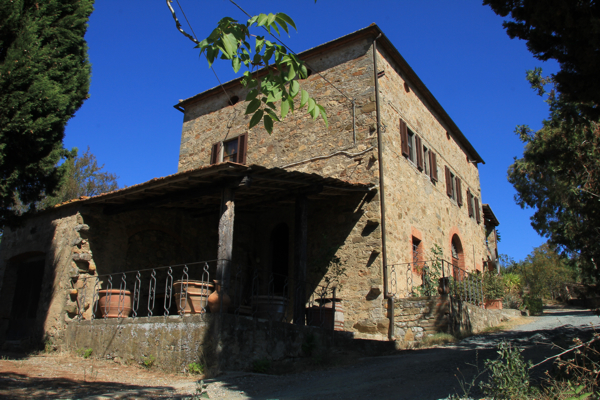 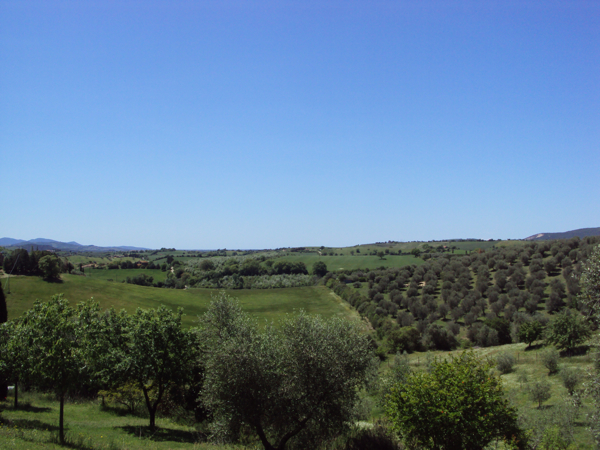 But it has been a challenge nonetheless because it forced us to work hard on mic placement and get the sounds right at the source and most important to commit to a given track and move on.

A specific room in the farm was chosen for tracking guitars. Brick walls and high vaulted ceilings made everything sound huge, and yet very controlled and open. It sounded so good.

It was hard to believe it wasn't actually designed for it!

In fact, we were able to print rough mixes right there at the end of every session, and they sounded good once we listen to them the next day or so. Definitely that room has been an important factor to achieve the sound of this album.

Pietro in the Bella Room

Natural acoustic treatment of the roof

Getting the Tracks Down

For the tracking process I was joined by sound engineer David Gnozzi.

We tracked drums and bass first and after that we started the guitars, probably the most complex elements for this song as there were three guitarists playing: Alex Sabadini, rhythm guitar for J27, Mamo Giusti, lead guitarist with J27, and, of course Tracii. 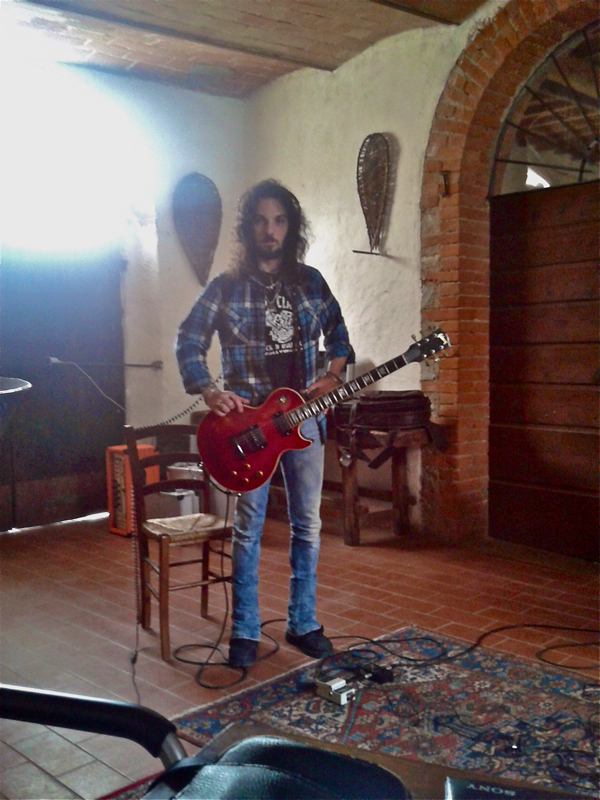 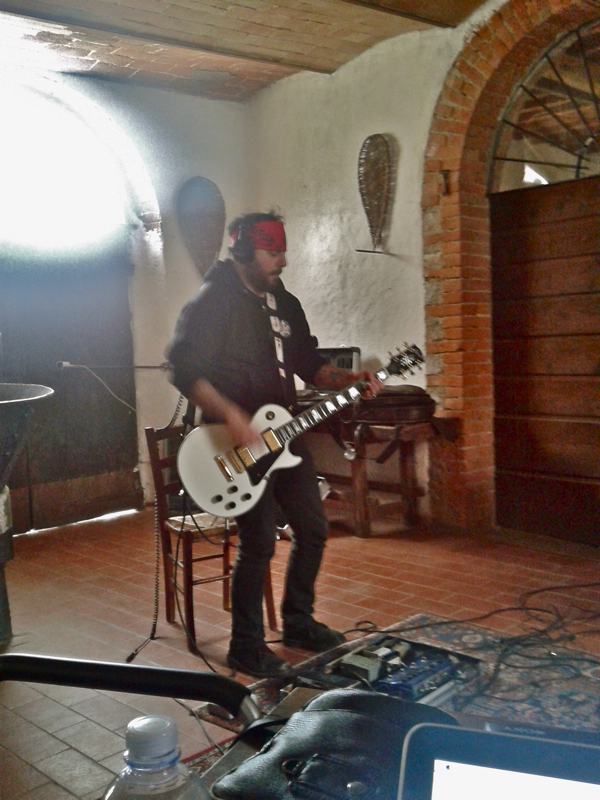 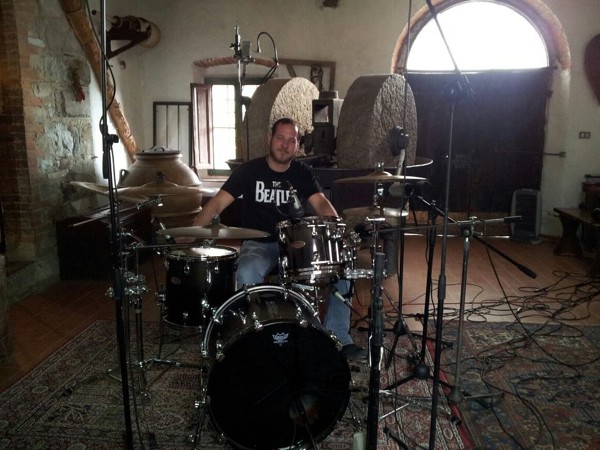 We came up with this crazy idea of placing the guitar amps in front of an old piano that was in the farm. The results were very interesting as the screaming loud amps were resonating through the piano giving back a very rich sound.

David spent lot of time on mics placement to make sure to capture what we were listening in the room. No EQ was used during tracking. He moved the mics until they sounded good, not just making sure they were in absolute perfect phase but more looking for the best interaction between all the mics. We wanted to get the sound right at the source, we wanted to commit instead of having to fix it in the mix.

We changed settings for different parts of the songs. For example clean arpeggios were recorded using a Golden Age Project MK1 ribbon microphone, which gave us a different tone, a different "space" to those sounds. This mic was going into a Chandler LTD-1, a warm, rich sounding preamp, which we could really push as that microphone needs quite some gain and that preamp really shines when it's pushed.

We didn't use its EQ section, but we did send it through a vintage DBX 165A on the chain before hitting the AD, a Mytek AD96. The DBX gave us its tone of course and put those arpeggios more up front right away. 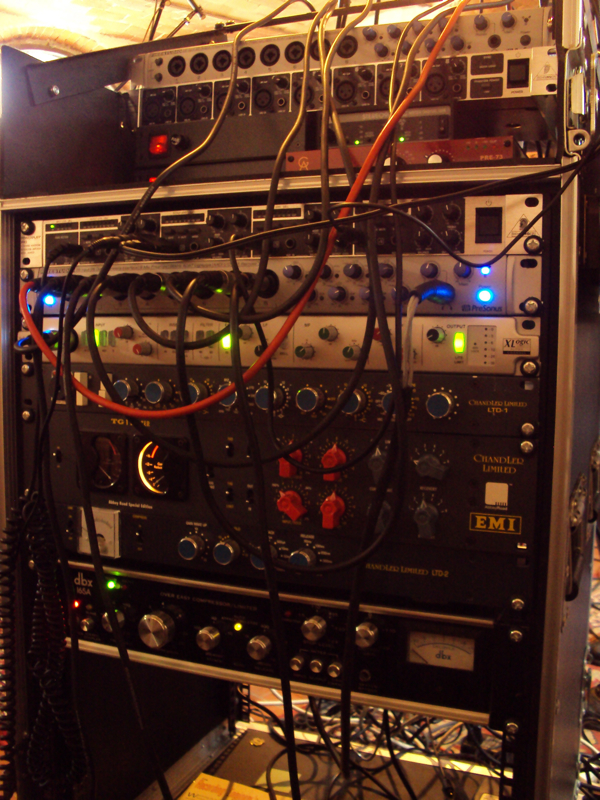 The rhythm guitars were tracked at very high volume, two microphones on the cabs: another ribbon mic, this time an MK3 from Golden Age, and the Audio Technica 4047 SV.

The ribbon mic went again into the Chandler LTD-1, and we decided to add the Chandler LTD-2 compressor in the chain, and it was a great choice because just running audio through this piece gives you such a thick and creamy sound, which on electric guitars, especially when you start to layer them, helps to get rid of the "fizz" on the top end and gives 'em a lot of body.

The condenser mic was placed about a foot apart from the cabinet, so to capture the sound of the room and the piano resonance. Since the close mic chain was already very colored and we went for an SSL Alpha Channel as preamp for the AT4047, which is very detailed and transparent sounding pre. Sound was good already but I wanted some more excitement for this mic as what we were hearing in the room was really something special.

Another Chandler unit came in to play, a TG1 Abbey Road Edition compressor which was used not only to add density to this track but David performed a nice trick on it: he set the first channel in THD more to add that "excitement" I was looking for and then route that first channel into the second one, which was set to Limit mode and this one was used to control dynamic and be able to really get all the details of the room mic.

The TG1 has this incredibly thick sound to it, its harmonic distortion mode (THD) is very musical.

For the lead guitar parts we changed setting again, two dynamic mics this time: the usual suspect Shure SM57 coupled with the Audix i5.

Both were going into my Presonus Firestudio pres, which are very transparent, almost invisible if you want. And that's great. I wanted transparency for the lead guitars because guitarists have their sound, they spend a lot of time on it, its their "voice", and my approach to it is, "The less you get in the way, the less you change it, the better." I tend to avoid EQ and compression when tracking leads instead.

I want to make sure the artists hear what they are used to hear when they play in front of the amp. I fond this to be a very important thing as in this way you have no other variables if not the guitarit's playing, and that's what we wanted.

We wanted to really capture the natural reverb of the room, that was one of the main reason we were tracking in that place and I wanted to make sure the room sound was as big in the recording as it was in person.

We placed a Neumann TLM 103 at about 2.5 m high and 3 m distance from the guitar cabinets after moving them around in the room for quite a bit. But when he found the right spot, I knew that was the sound I was looking for.

This mic went into a Golden Age pre-73, a Neve-ish style preamp, we didn't push it too much because the microphone itself has a pretty high sensitivity and this preamp get a little dirty when pushed and we wanted this track to sound more natural. But the Chandler TG1 was inserted in the chain again, used very lightly this time we we agreed that it added something good while being faithful to the source.

So, you'll get from this detailed description that we wanted to commit. We wanted to get the sounds right at the source. We wanted to be happy with what we were hearing just doing a rough "volumes and pans only mix".

I wanted to follow this approach not only on the technical side, but also regarding the performances so we decided to track full takes only, and not do overdubs.

Tracii himself belives that the character and personality of a sound, of a song, lays in the little imperfections of the performance. An old school L.A. philosophy, and I can only agree with that as most of my past experiences as engineer took place there.

Following the same path, we decided not to do any editing. If there was some "dirt" in the sounds, well it was part of it, and we wanted to keep it that way.

Rough mixes were made at the end of every session, and were already incredibly good.

A big part of it was this very dense and rich sound of the room we tracked in, which gave the tracks this really incredible depth and "3D effect".

Before the tracks went for the final mix, I asked for the supervision of my colleague Bob Benozzo, well known for his mainstream productions on Chambao, Alejandro Sanz, that gained four Latin Grammy Nominations. Bob confirmed me that the tracks sounded good, already well compressed, and gave me some ideas on how the final product should sound.

The tracks were then sent for the mix, which was done by two American colleagues with whom I've worked for many years, Sylvia Massy Shivy and Richard Vetrop, at Radiostar Studios in Weed, now called Loud Palace. They really don't need an introduction, as we all know the incredible list of credits they have, but the reason I often work with them is because I find they have a very musical approach to the process.

They're always faithful to the recording. They know we spent a lot of time and effort in getting the sounds right, and they respect that, and yet they're always able to enhance the material and come up with great natural sounding mixes.

The mastering was done by Joe Gastwirt, one of the last purists of analogue mastering. We've known each other for about 10 years—he has been a teacher to me. Each work he's done is a masterpiece, and this one was no less.

The synergy between the artistic production, the engineering, the mix and the mastering processes all together really made the whole greater than the sum of its parts.

If you're curious after reading all of this about what the tracks actually sound like, here are some brief examples. Enjoy!

Pietro Foresti
I am a sound doctor, a mix surgeon, a musicians' psychotherapist. I have an holistic approach that sees music as a "magma" to forge as a whole thing without getting lost in noisy particulars. Only later I will light the path to the detail that makes the difference. I am a musician with baggage of an arranger, a composer, a sound engineer, a music-therapist. I am a producer of character that gives character to everything I produce.
Weekly email summary