The Mac App Store has just opened, and the first day was an unqualified success, with the download of over a million apps. What will the app store mean for audio software, and the future of the Mac? We have a look at the audio apps available on Day 1.

There has been concern expressed over whether the app store is right for audio. It isn't the right platform (in its current state) for the sale of plugins. And there is concern about the huge margins Apple make from other people's software. Yet there are already 76 apps in the "Music" category of the store.

There are also fears about whether Apple will make the Mac a closed shop by forcing all apps to be sold through the app store at some point in the future. But that remains to be seen. For now, the Mac App Store is a convenient way for Apple users to discover, install and update software. Let's have a look at what's available.

By the way, you install the app store on your Mac by doing a standard System Update from the Apple menu. And since I have access to the Australian store, any prices I mention are in Australian dollars. 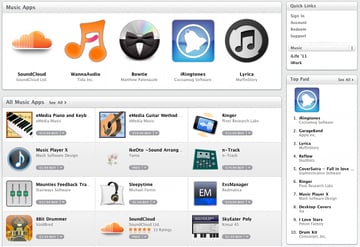 I imagine the app store will be a great way to distribute free apps. So far there are only five in the store.

The Most Expensive Options

While most apps are under $100, there are a couple that break that barrier. Here are the most expensive eight apps. Which of these would you consider buying?

Here are a few apps that look interesting and are less than $10.

So while the Mac app store has had a promising beginning, it is not yet the place to go for your audio needs. It is a convenient place to get hold of Garage Band if you don't already have it, and there are a few other mid-range DAWs in the $50-60 price range that we may cover in a future article.

But I'll be visiting from time to time to keep track of what is available, and there are a few toys I might spend a few dollars on. Have you purchased any audio apps from the store yet? What did you get, and how have you found them?