52 songs were chosen for this study, as determined by the Kent music report, archived by the National Film and Sound archive and also the ARIA music charts. The songs chosen can be viewed in Part 1 of this series.

In Part 3 we will focus on song form. Song form refers to it's structural make up, for example, verses, choruses, etc. There were four elements of song form chosen, these were:

A fade-out was also noted, but was decided to not be a significant element of a song as it usually consisted of one of the other elements just repeated until silence.

There are many different schools of thought about what a mid-8 is and what a bridge is, sometimes a bridge is referred to as the mid-8 other times it is reffered to as the pre-chorus. Therefore the term mid-8 was chosen to represent that 'middle' part of a song which usually differs significantly from either verse or chorus.

An outro was noted as being an ending to a song that was significantly different from teh three other elements.

Over seven transitions of form as presented in the chart above, a clearly defined form can be described. Your Number 1 pop hit should follow this form:

You could argue that the fifth element or transition could in fact be either a verse, chorus or mid-8 as they all register close to similar occurrences.

Also of interest is the question, how long before the chorus should come in?

The majority of songs (51%) feature the first chorus between the 30 and 60 second mark, with a majority of those being between 40 and 50 seconds.

But what about those fade-outs I hear you say. 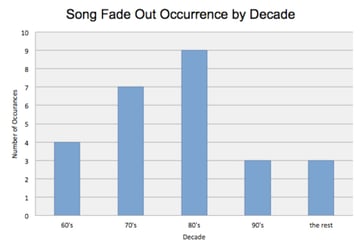 Over 50% of the songs featured a fade-out of sorts, and just for fun I sorted them by decade. It would seem that in the 80's there was a a heavy lean towards fading out those songs, with 9 of the 10 number one hits, featuring one!

So what can we deduce from this, your song should stick to the often accepted verse, chorus structure, featuring the chorus before you hit 1 minute, and if you want to create an 80's disco hit, make sure you have a fade-out. In part 4 we will look at chord structure. Stay tuned, and remember that no matter what you create, let statistics only be a guide.