52 songs were chosen for this study, as determined by the Kent music report, archived by the National Film and Sound archive and also the ARIA music charts. The songs chosen can be viewed in Part 1 of this series.

In Part 4, the final chapter, we will focus on chord structure. I sat down with all songs and a keyboard and went through each one to determine it's key (key rather than key signature), it's tonailty (major/minor) and the chords used within that key expressed as Roman numerals. Don't worry if you don't understand Roman numeral notation, I will explain it to you shortly.

Three keys came to the fore as the main ones used in pop music composition. E, C and F.

Interestingly there were no songs written in G flat, perhaps because it has 6 flats in it! G♭, A♭, B♭, C♭, D♭ and E♭. That's a lot of flats, too many for a simple keyboard player like me. The keys of E, C and F on the other hand are relatively simple to play on instruments like piano and guitar, as I'm sure many guitarists will attest to.

Unsurprisingly, 82% of the songs were in a major key (or tonality), with only 2%, or one song being represented by 'other', in this case a blues scale. 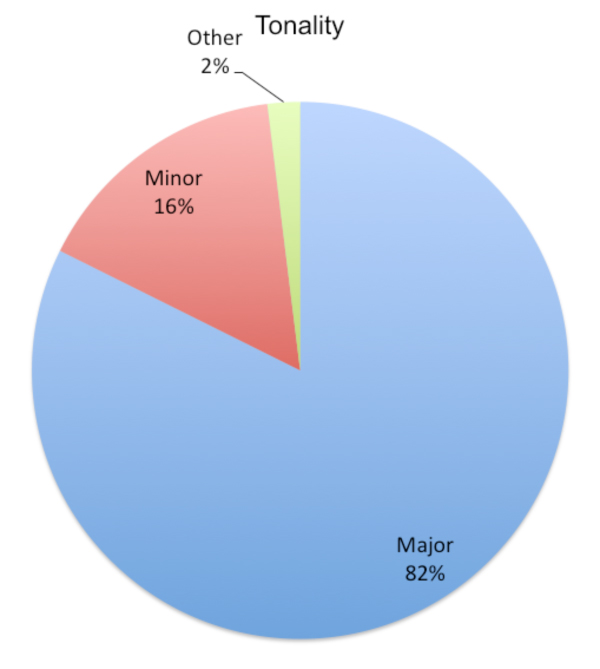 However, if we collate the data by total chords used as expressed in the above table, then we come up with a different outlook, though perhaps not a scientifically appropriate one. Expressed in the key of C Major for ease of digestion and presented below, the first four chords of a verse and chorus are:

So to give you a 'hit' (excuse the pun) of what this chord structure sounds like, I whipped up a quick 16 bar song in my DAW. Feel free to laugh at my effort, this is a chord structure example, rather than a music production example after all!

It's been a wild ride of data, and memories as I have relived some of the popular music from my youth, and my fathers youth throughout this exercise, and I hope it has provided some insight for you also. I have collated all of the difinitive recommendations below 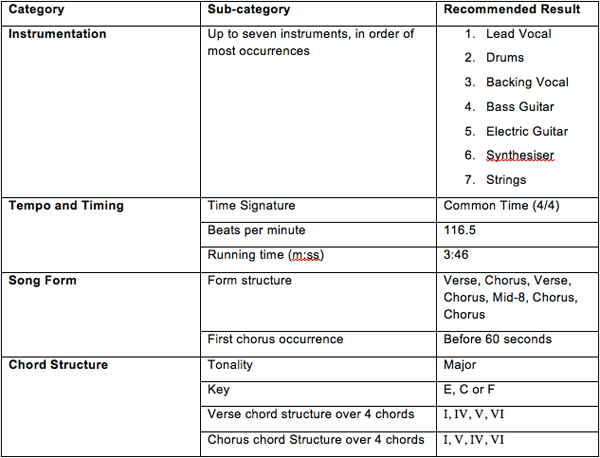 If anyone wants a copy of the finished research paper that these tutorials were drawn from, if you're a little geeky like me, please feel free to contact me at createapopsong@gmail.com. Also remember that no matter what you create, let statistics only be a guide.