Critique: Green's the Color of Winter

Here in the United States, this song would fall under the category of Americana/folk and it fits well into the category. It is the kind of song that lends itself to a simple and acoustic production. I enjoyed the evocative and wintery feeling of the piece. My opinions are based on countless meetings with music publishers, A and R people, co-writing experiences, and just a lot of years writing professionally in Nashville.

This is a critique of "Green's the Color of Winter" by Aron Blue. You can check out the original workshop here.

Coming off of the four bar intro, I had a little trouble with the placement of the initial downbeat at the top of the verse. The two extra beats that had been added felt a little awkward to my ear. I really tried to hear it differently but couldn't.

Because the song is quite repetitive in a good way, I would have preferred to hear a bridge in lieu of a third verse section. My ear was ready for a melody and phrasing change at this point. I would reconstruct the lyric to accommodate a new section that is different and provides release from the previous two verses. Strive for a less intricate feel here, I think. Contrast between sections is a great tool in songwriting.

In the first verse, I would use a shorter word like BARE to replace DESOLATE and continue straight into the second line without pause. Coming off the intro on a four count, hit the syllable JAN on the one and keep to that tighter phrasing. I would also shorten the pause between lines three and four to accentuate the near rhymes of GOLD and HOME and to create greater memorability. The song has a rambling nature and would flow better with a more predictable count. Don't get me wrong; I love syncopation and musical pushes as much as the next guy, but sometimes it just feels irregular for the sake of irregular. 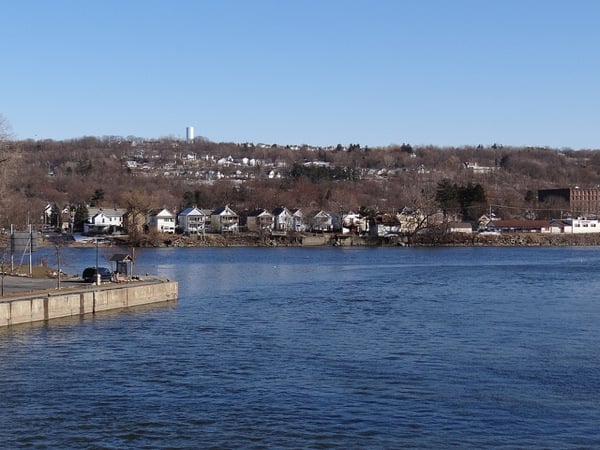 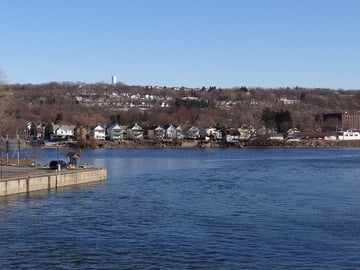 The second verse needs to flow much more like the first verse in terms of syllables and phrasing. It has basically three lines unlike the first verse with four. The song will be so much more hooky if these match better. The ear likes to adapt and feel like it can follow along by this point in the song. Match the rhyme scheme as well. This will take quite a bit of rewriting. For example, "My uncle never loved the Hudson like our little river..." (downbeat on UNC), would parallel well with:

"The January streets are bare and purged of all desire."

Continue to parallel the two verses as much as possible without being rigid or forcing odd accents on words.

Also, the hook is long and not easy to phrase well. I would try to melodically underline and accentuate it better by changing the phrasing and melody if need be. I would also simply call the song THE COLOR OF WINTER. There should be no doubt as to what is the hook in most songs. Note how the hook or titles of most songs are musically underlined, if you know what I mean. It gives them emphasis by calling attention to them. All the right syllables are stressed to hammer it home. It should take center stage.

Your third verse lyric, which I am proposing as the new bridge, is very tight and being that it becomes philosophical and poses a question for the listener, it is dead on for this point in the song. Well done! It provides a content change and a needed departure. Unfortunately it would be best if it did not phrase just like the verses when it becomes a bridge. Play with it and maybe it can stand as is with a new melody, chords, and phrasing. Don't be married to it if it needs to change a bit.

The lyrical content is lovely and poetic which is suitable for this type of song. Where a different genre might call for something more conversational, this style of writing is just right for a cerebral folky piece. I found it very moody and thought provoking.

I had some question about the use of the word GREEN. I love the contrast because winter in the north is typically lacking in color, but I think the hook needs to be at least somewhat substantiated. Is it an abstract adjective in this case or a description of a mild climate? I found myself wanting to know what you meant. You aroused my curiosity and that is a very good thing.

The line about the river running dry is a nice one but did not seem to have much to do with the content of this verse. Tie it in, omit it or relocate it.

I very much like the line about having to move away from one river to write about the other, but it needs some phrasing work in order to sync up with the first verse phrasing better. Once the second verse is tightened up, you'll need an additional line to set up the hook as in the first verse. The addition of the tag line, "That January green" doesn't bother me and sets up a different bridge melody effectively.

I found this idea to be fresh and anybody can relate to it. The fact that many do not think of winter as green, adds to the fact that this is a unique and personal experience. I would still like to see at least one line that sheds a little light on the theme of green and gives it credence. Give the listener a clue as to what you mean. There are traits of everyone's hometown that an outsider might not notice or understand. Guide us a bit more. Take us with you in your thought process. I believe this song will feel much more original with some added melodic meat in the bridge.

Folk music, by its very nature is not all that commercial. I am a fan of the style and wish more of it were mainstream. It can be wonderful in the soundtracks of certain films where no other type of music would do. Nature walks hand in hand with folk music. Period pieces often call for it too. Production can swing it more in the commercial direction but sometimes it is at the expense of the artistry of the piece. It is what it is.

The song is somewhat rambling and irregular to my ear as is. To me this can be greatly improved by matching up your verses better and by following an even count right out of the intro. Being a slave to form can feel like a sellout, but it really can enhance a song's presence and make it linger in the mind. Establish regularity and then stray from it where it enhances the song. 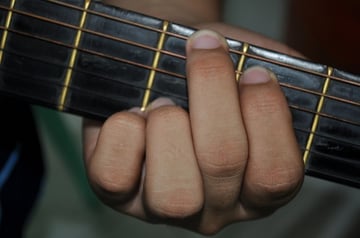 You might consider a different chord at the end of the third verse because the same 6 minor occurs at the end of every line. There is a nice drone in doing that but a change is worth considering at that point in the verse.
If you do take my suggestion and turn the third verse into a bridge section, consider the use of some major chords. Songs that remain minor all the way through get a little dirge-like. You can add a lot of dimension to this song by giving it a slight feel- change in this way.

This kind of song translates fine with a simple acoustic demo. The addition of some sparse fiddle or even cello in the second verse would add a nice silky fullness without getting very complicated. Rise to a build and come back down near the song's end. A simple one part higher or lower harmony would be nice too as long as it is sparse and comes in a ways into the song.

I think this writer shows a great deal of lyrical flare and talent. The lyric is intelligent, artistic, clever, and thought provoking. The vocal was pleasantly understated. Though parts of the melody shone, I feel the most work is needed there. When I first began writing in a professional setting, I learned a lot by taking long walks in the woods and listening to the songs are great writers in my earphones. I took the songs apart and analyzed every part of them to see how the writers achieved what they achieved. A stellar writer once told me that a great exercise to improve one's songwriting is this:

Find a successful song that you greatly admire. Write a new lyric to it that follows the same form, rhyme, chords, and phrasing. Then go back and create a completely new melody. Make a few chord adjustments as well if you wish. It really does help a person to achieve good form. Try it out. It's fun!
Good luck with your writing! It was my pleasure listening to it!