The auxiliary send is an important and versatile part of a mixing board. This post is a clear explanation and helpful overview of the topic from Mark Garrison's book Encyclopedia of Home Recording.

An auxiliary send allows us to take a signal from a channel on the mixing board and send it out of the mixer to an external destination. The two most common uses for an auxiliary send are for external effects and for creating multiple mixes (such as monitor mixes for a live performance). The number of auxiliary sends per channel will vary from mixer to mixer.

An effect placed on an insert is called a serial effect because the path moves through the devices in a series: first part of channel strip, external device, then second part of channel strip. Routing in this manner is used for processors that require the entire signal to be processed, such as compressors and equalizers. An effect used via an auxiliary send is called a parallel effect because it creates two copies of the signal (one processed, one unprocessed) that take parallel paths through the mixing board (see Fig. 7 below). Parallel routing is used for effects where the original and processed signals are to be blended together, such as reverb or delay. Running effects through an auxiliary send has the added benefit that multiple channels can be routed to the same processor (for example, all channels can use the same reverb).

In the signal path, the auxiliary send usually comes after the insert point and before the equalizer. On the channel strip it will be controlled by a knob or fader usually marked “Aux” or “Aux Send” (see Fig. 6). The mixer will also have an output to match each aux send. Each auxilary send will be accessible on every
channel, meaning that more than one channel can be sent to the same auxiliary output. Turning up the aux send on a channel will increase the amount of signal from that channel that will be sent to the aux output. The auxiliary output can then be plugged into the input of an effect processor or amplifier (for a monitor mix).

In the case of using an auxiliary for effects, the “wet” signal (with effect) needs to be returned to the mixing board to mix with the “dry” signal (without effect). This is achieved by plugging the output of the effect processor in to the auxiliary return (see Fig. 7). The aux return will also have a volume control to dictate how much of the wet signal is blended back into the mix. So, the aux send knobs control how much of each channel goes into the effect, and the aux return knob controls how much of the wet signal is added back into the mix. 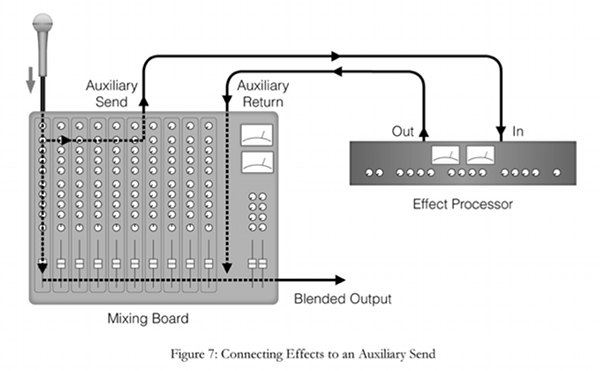 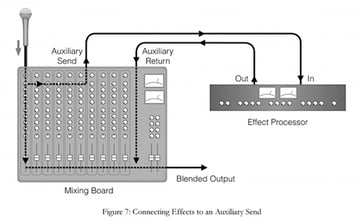 It is important, if you are using a send to create a separate mix, to have your send pre-fader because otherwise any changes to the main mix would also change the aux mix. By using a pre-fader send, the output of the send is not affected by the main mix.

If a send is being used for an effect, it is generally best to use a post-fader send so that the send does not have to be adjusted every time the channel volume is changed. Having a send set as pre-fader when using effects can be a problem because turning a channel down will still leave the processed version of the signal in the mix at the same volume.