Understanding bit depth is essential when using DAW software. This post is a clear explanation and helpful overview of the topic from Mark Garrison's book Encyclopedia of Home Recording.

Digital recording is achieved by converting analog audio signal into binary code. Binary code is a numerical made up of a series of ons and offs (or signal and no-signal) which are usually represented as ones and zeros. Each of these ones and zeros is referred to as a bit, and these bits form digital words. Bit depth refers to the length of each digital word.

Digital recordings consist of a series of static samples which are played back rapidly to create sound (see Fig. 12). This is very similar to the way motion pictures are made up of static photos shown fast enough to fool our eyes into thinking the picture is moving. A CD has a sample rate of 44.1 kHz which means that it has 44,100 digital samples for every second of audio. 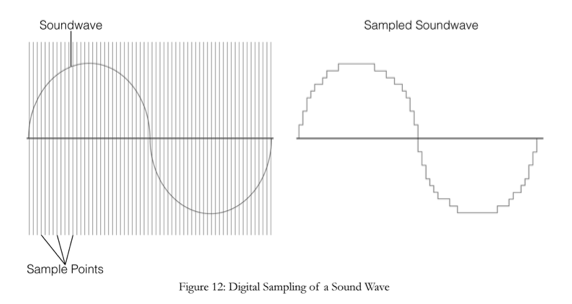 The Practical Results of Bit Depth

There are two practical benefits of higher bit depth. First, the longer digital word allows for a more precise measurement of the amplitude of the signal at the time of the sample. This means a more accurate recording.

The second reason is that any errors that occur during recording or playback will be less significant. If there is an error resulting in two of the bits in a 16- bit recording being completely lost then 1/8 of the sample is missing. In a 24- bit recording, losing two bits would only be 1/12 of the sample. Fewer errors effectively means less noise in a recording.

The downside of using a higher bit depth is greatly increased file size. As hard drives and other digital storage mediums get cheaper, however, this becomes less and less of an issue.

Most engineers will choose to record using the highest bit depth and sample rate available even if the recording is eventually going to be released on a medium that does not support it. This allows them to somewhat “future-proof” their recordings so they can take advantage of more advanced mediums down the road.