Understanding compression is essential when producing, mixing and mastering. This post is a clear explanation and helpful overview of the topic from Mark Garrison's book Encyclopedia of Home Recording.

Compression is a way of controlling the dynamics (the difference between the loudest parts and the quietest parts) of a signal. This is done by reducing the volume of the louder parts of the signal, which allows the volume of the whole signal to be increased accordingly (see Fig. 22). The result is more overall volume without the signal distorting at the louder points.

Some find compression easier to understand if they think of it as an automated volume control. It reduces the output during volume peaks, resulting in a more consistent output volume.

The reasons for using compression include, among others, reducing the risk of distortion while tracking, dealing with an overly dynamic performance (i.e., a vocalist who is too loud in the loud parts and too quiet in the soft parts), making an instrument sit more evenly in the mix (such as percussion), fattening up a sound, and increasing perceived volume. 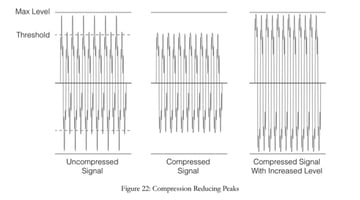 Compressors are referred to as “transparent” if they have little effect on the instrument’s tone and “non-transparent” if there is a noticeable change in tonal quality. Depending on the application, an engineer may choose one style or the other. When budget is a concern, a transparent compressor can be a more versatile choice for the home studio.

While compression is an extremely useful tool, and is used extensively in popular music styles, it should be used carefully. Too much, or poorly implemented, compression can rob a performance of its natural dynamics.

It is also important to be aware that when the overall volume of a signal is raised after compression, any noise in the signal will be increased as well. Therefore, every decibel of compression will add a decibel of noise. This is less of a concern when recording with digital equipment, which does not have the self-noise that we experience with tape, but computer fans, traffic, heating systems, and other ambient noise from the recording environment will become more prominent when compression is used.

The threshold is the volume level at which the compressor begins to work. Once the threshold has been exceeded, all signal above threshold will be reduced according to the compression ratio, which determines the ratio of input signal to output signal. For example, if we have a ratio of 2:1, for every 2 decibels (dB) of input above the threshold we will get 1 decibel of output (see Fig. 23).

For the sake of illustration, here is an example using round numbers: If we have the threshold set to begin compressing at 2 dB of input signal and have set the compression ratio to 4:1, then 6 dB of input would result in 3 dB of output (2 dB are below the threshold, and the 4 dB above the threshold have been reduced to 1 dB).

A compressor with a ratio of 10:1 or greater is called a limiter because the out signal will only ever barely exceed the threshold.

The attack control on a compressor affects how quickly, once the threshold is exceeded, the compressor begins to work. A slow attack will allow transient peaks (short bursts of sound) to pass by without triggering the compressor, whereas a fast attack will catch them.

The release controls how quickly compression stops once the signal has fallen below the threshold again. A slow release time will allow dips in volume to go by without the compressor dropping out and in again. 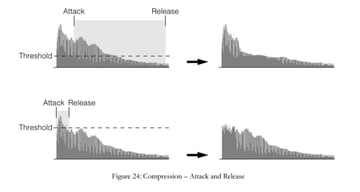 Knee is frequently confused with attack time. Here is an analogy that may make the difference more clear. Consider a car driving at 50 kph that needs to slow to 30 kph. Once the instruction is given to the driver to slow down, there will be two factors that will affect how long it takes for the car’s speed to reach 30 kph: the driver’s reaction time (the attack time on a compressor) and the car’s rate of deceleration (the knee on a compressor). So, in this analogy, hard-knee compression would be a car that slowed from 50 kph to 30 kph in the blink of an eye, while soft-knee compression would gradually slow until the car had reached 30 kph. 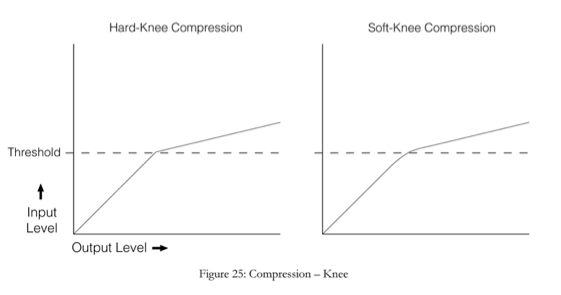 A limiter is a compressor with a compression ratio of 10:1 or higher. With such heavy compression, they can be thought of as somewhat of a brick wall for sound since the output signal will not move far above the threshold. Limiters can be very useful to avoid clipping during tracking, mixdown, and mastering.

Dynamic range is a measurement of the difference between the quietest possible sound (silence) and the loudest possible sound that can be handled by a given medium. The potential dynamic range of music in an acoustic environment is as high as 120 decibels (dB). The dynamic range of a CD is closer to 80 dB, FM radio is only about 50 dB, and AM radio a mere 30 dB. With these severe limitations on dynamic range, compression becomes necessary in order to allow the changing dynamics in music to be heard.

Another reason for limiting the dynamic range of a recording is consideration of the listening environment. Many people listen to music in environments with a lot of background noise, such as in their car or at work. In these situations quieter passages will be masked by the background noise. Careful compression can be used to reduce this problem.

Multi-band compressors are most commonly used in the mastering process, when instruments can no longer be affected separately. Because the frequency bands are compressed separately, an overly dynamic instrument in one range will not affect the amount of compression in other ranges.

During the mastering process, compression is usually added to the completed mix. This is done with the dynamic limitations of different mediums in mind (as mentioned above), but is also used to increase the perceived volume of the mix. In modern music there is a bit of an unspoken competition to make louder mixes, the reasoning being that if your song is just a bit louder than any other on the radio, it will be noticed more.

The advertising industry uses this same technique, which is why television commercials are often far louder that the programs themselves.

It has been said that the sound of modern music is the sound of compression. By the time we hear a sound in a modern recording it has generally been compressed multiple times.

During the tracking process, a little bit of compression can act as a safety net, preventing the signal from clipping. This can save a good take that may otherwise have been unusable due to distortion.

Depending on the style of music, instruments may be compressed again (sometimes quite heavily) during the mixing process in order to have them all sit nicely in the mix. This is also a first chance to get the overall volume of the mix higher.

Once the track is mixed, it will usually be compressed again during the mastering process to further increase its perceived volume. This needs to be done carefully as it is very easy at this point to lose the natural dynamics of the song.

If the track is then broadcast over the radio, it is compressed again (rather heavily) in order to deal with the limited dynamic range of radio broadcasting.

Significant amounts of compression have become not only accepted but expected in modern recordings.