Decibels are used to measure sound pressure level, which equates to volume. Being familiar with decibels is helpful when mixing. This post is a clear explanation and helpful overview of the topic from Mark Garrison's book Encyclopedia of Home Recording.

The decibel (dB) is a unit of measurement used to measure differences in relative intensity. For our purposes here, the decibel is a measurement of sound pressure level and signal level.

Decibels can be very confusing for those new to recording because of the different ways in which they are used. Because this is a home recording book and not a physics textbook, we will be simplifying the definitions here and limiting their descriptions to their practical use in recording.

The first distinction we will make is between using decibels to measure sound pressure level and using them to measure signal level.

Sound pressure level (SPL) is a measurement of the air pressure being caused by sound, which results in physical force against the eardrum (or the diaphragm of a microphone). In the acoustic environment this translates to volume. Measurements of this nature are usually expressed as dB SPL (decibels of sound pressure level).

Silence (at least as far as the human ear is concerned) is expressed as 0 dB SPL. Sound starts to become painful to our ears at approximately 130 dB SPL. Because of this, the range of human hearing is said to be roughly 130 dB.

The average rock concert is about 110 dB SPL. This is enough to cause hearing loss after only 15 minutes of exposure, so if you value your hearing, it would be wise to invest in some good ear plugs (see Fig. 32). 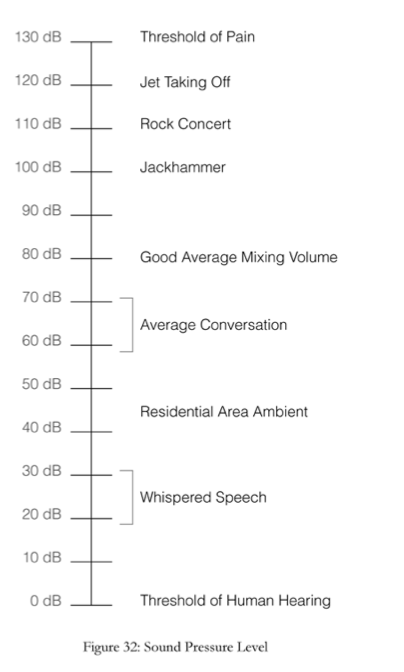 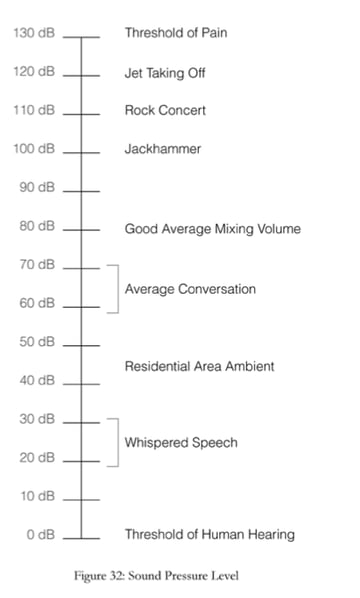 A significant factor in the way we perceive volume is the fact that the human ear does not respond equally to all frequencies at all volumes. Our ears become more sensitive to very high and very low frequencies as volume increases.

In the 1930s, Harvey Fletcher and W. A. Munson studied this effect and plotted graphs of how the ear responds at different volumes. The resulting graphs are referred to as “Fletcher-Munson curves” or “equal loudness contours”. Many home and car stereo manufacturers have introduced “loudness” circuits which give the impression of louder volume by boosting frequencies according to this theory.

An important practical lesson to be learned from this information is that music mixed at loud volumes can sound quite different when played back at lower volumes. For this reason most engineers will listen to a recording at various volumes during the mixing process. 85 dB SPL is considered to be the best average volume for mixing as it tends to provide the least tonal changes.

Most dynamic microphones are capable of withstanding very high SPL (often as high as 160 dB). This makes them an easy choice for high volume recording. Condenser microphones usually have lower SPL ratings than dynamic mics; however, some will have a “pad” built into them which attenuates the output of the mic capsule, increasing the maximum SPL rating. It is advisable to leave the pad off when recording at normal volumes because the mic’s signal-to-noise ratio is lowered when it is engaged.

When dealing with signal level as opposed to sound pressure, decibels are used a little differently. To further confuse things, there is a difference between using decibels for metering and for referring to relative signal level.

When used for metering a signal level, 0 dB is the highest signal level achievable without distortion. All signal levels below distortion are then represented as negative numbers. For example, a healthy signal level might peak around -2 dB. What can make things even more confusing is that some meters use VU (volume units) instead of decibels for metering (see VU Meter).

On controls and processors that affect signal level, it is necessary to use decibels to refer to relative signal levels. A volume fader may be labeled with a “0”, or a “U” (for unity), part way up to mark the point at which that fader is neither boosting nor attenuating the signal. Above the unity point are positive values to indicate increased signal level, and below unity are negative values because the fader is then reducing the signal by the amount indicated. At the bottom of the fader will generally be -∞ (minus infinity) to indicate that the signal is being reduced to silence.