Understanding phase can help you diagnose problems when miking or mixing. This post is a clear explanation and helpful overview of the topic from Mark Garrison's book Encyclopedia of Home Recording. 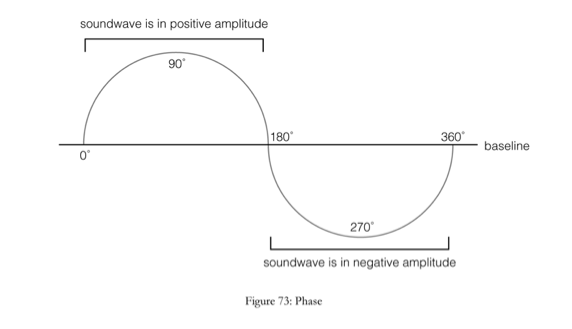 Most problems with out-of-phase signals come from delay effects or from poor stereo mic placement. When phase problems result from delay effects, the solution is usually as simple as adjusting the delay time until the phasing stops. Phase issues from mic placement can be avoided by using coincident pairs (mics placed with the capsules together) or by following the 3:1 rule (mics should be three times as far from each other as they are from the instrument). Because phase problems only show up when the two signals are being played through the same speaker, it is very important to always check mixes in mono.

When two mics are used on the same instrument from different sides, for example miking the top and bottom of a snare drum, the resulting signals will usually be 180 ̊ out-of-phase from each other. This can be fixed by reversing the phase on one of the signals. Many devices have phase reversal circuits, which are usually labelled with the “Ø” symbol. If a phase reversal circuit is not available, a mic cable can be made to reverse the phase by swapping its hot and cold leads at one end. This is usually a last resort, as it makes the cable unusable for any other application and creates the possibility of accidental phase reversal by inadvertently using the modified cable.