How to Compose Song Demos in GarageBand, Wrap-up

Are you new to audio? Apple's GarageBand is a great way to get into music production. Recently guitarist Glynn Davies gave us a series of tuts focussed on using GarageBand to record song demos with your guitar.

GarageBand is a digital audio workstation (or DAW) designed with beginners in mind. If you use a Mac, it is the best way to get your teeth into audio production. The program has streamlined the process, letting you worry less about the technical process, and jump straight into making music. It is also inexpensive, removing the large financial burden usually associated with audio production. It also probably came preinstalled on your Mac, but even if it didn't, it is part of Apple's inexpensive iLife package, costing around $65.

That's all great news if you have a Mac. Unfortunately there isn't really an equivalent in the Windows world, though I'd love to hear your suggestions for an entry-level Windows DAW in the comments. You might like to check out our article, 7 Free Digital Recording Apps for Windows.

Of course, the program has its limits, and depending on your goals you may run into them sooner rather than later. If you think that's likely to happen to you, you might want to consider starting with a full-featured DAW like Logic Pro, Pro Tools or others. If you'd like to get to know many of the options when choosing a DAW, follow along with our Exploring DAWs series each weekend. If you have thoughts about whether it's best for a beginner to start with a program like GarageBand or just jump straight into a full-featured DAW, I'd love to hear them in the comments too.

If you missed the series, you can find the previous tutorials here:

Part 1 of the series takes you through how to set up your first project. It goes through what equipment you'll need (taking the easiest and least expensive route), how to initally set up GarageBand, how to EQ your guitar and use GarageBand's built-in effects pedals, and some basic ideas and concepts to get started with your recording.

Part 2 introduces you to the world of loops. Glynn takes you through how to create a rhythm track for your masterpiece by using and arranging drum loops. Then he shows you how you can rehearse and later record your guitar part and backing track by playing along with your drum loops. 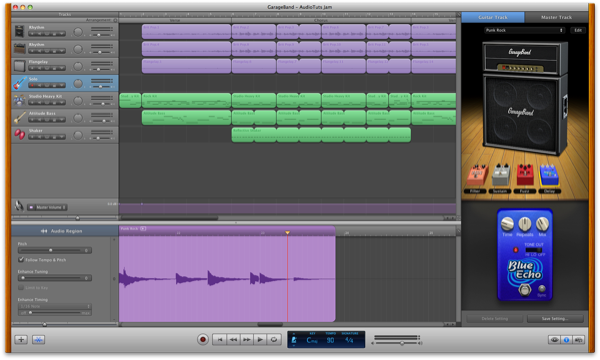 Finally, in Part 3, we learn how to polish our demo track. Glynn covers how to trim and align tracks, add effects, set levels, add EQ, choose master track presets, and export to MP3 for others to enjoy.

If you follow these tutorials, you'll end up with a finished demo track. What do you think of your masterpiece? It might take you a few goes before you create something you're happy with.

If you're fairly happy with your track and would like to get feedback from others, consider submitting your track for a workshop. We run workshops several times a week, uploading tracks for constructive feedback from the Audiotuts+ community. You can learn more about workshopping here, and you'll find a link to the form for uploading your track at the bottom of the article.

Where do you go from here? Glynn finished the series with five suggestions which are worth repeating here:

Have fun, and let us know in the comments how you went with this tutorial series.