Some vocalist pronounce their S's more than others. For us recording enthusiasts, this can pose a problem. S sounds have more energy and can be annoying to listen to because they tend to pop out at you, out of context to the rest of the vocal. We want our vocal to sound smooth and clear, and not jump out at you every time the vocalist has a word that starts with an S.

Many audio programs come with so-called de-essers. De-esser are
compressors that only compress the S's, evening out the energy and
smoothing out the pronunciation of the S's. De-essers work great but
can be confusing. Logic comes with a de-esser that I have to admit I
have no idea how to use. I have never gotten to grips with that
particular de-esser, and in the end I gave up using it and just created
my own, using some simple routing tricks.

In the following steps, I'm going to walk you through creating a
simple de-esser using a compressor, a side-chain and a little
routing. Since these steps are fairly simple and don't especially
belong to Logic in a sense, this same technique can be used in any
DAW. Creating a simple de-esser like this can be a real life saver
when the time comes to mix your track.

This is the vocal melody we'll be
processing. It doesn't have a lot of sibilance, but enough to work
with for now. It even seems to have a little lisp at the end, but
we'll be ignoring that as well.

We need to duplicate the vocal track we
need to process with our make-shift de-esser. Let's create a new
track below the main vocal and name it "DE-ESSER".

Now let's copy the vocal track above to
this new de-esser track. Grab the vocal track, hold SHIFT and ALT and
drag it down into the new track. That should copy our track and by
holding down the shift key we don't nudge it or otherwise compromise
it's location.

We are going to process this vocal
track, pinpointing the S sounds of our vocalist so we can
compress only those sounds later.

Let's find our offending S sounds in the frequency spectrum and
insert an EQ on the DE-ESSER track and filter out the unwanted
frequencies. Sibilance is found in the range around 7Khz so we'll be
filtering out the low end up to 6.5 and filtering out the high end
from 7.5Khz or so.

Now take a bell curve and put its Q setting to the highest
number possible so it becomes a big notch boost. By boosting all the
way to the top and sweeping around the 7Khz range we can find where
the S sounds pop out most prominently. When we find that we tighten
up the filters around it, only letting that S sound pass through. 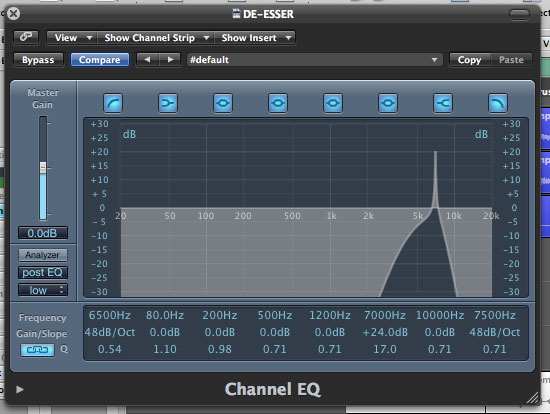 There is another way of pinpointing the sibilance using only the
filters. If you put the Q of the low pass filter, for example, at its
highest (100), it creates a spike where it starts to filter. That way
we end up with almost the same result, but maybe even more exact. 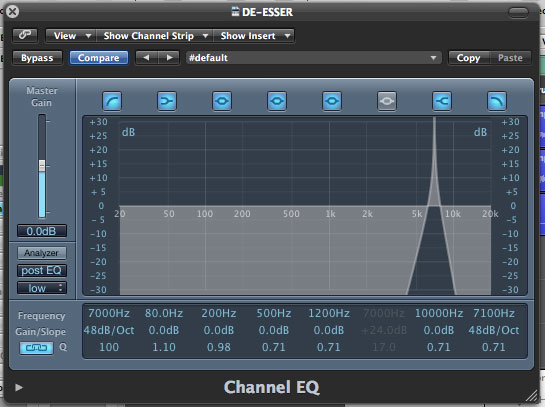 What we end up with is this. No vocal melody to speak of, only
sibilance.

We don't actually want to listen to this horribly EQ'd vocal track
so we'll put the output of this particular track to NONE. Now we can
process our vocal using this EQed track without compromising the
sound of our mix, a ghost track if you will.

Most compressors have a side-chain setting. By using the
side-chain we are giving a different track the ability to control our
compressor. In this case it comes in handy because we want the
super-pronounced S's we did in the last step to control when the
compressor starts pumping.

Lets insert a compresor on the main vocal track. 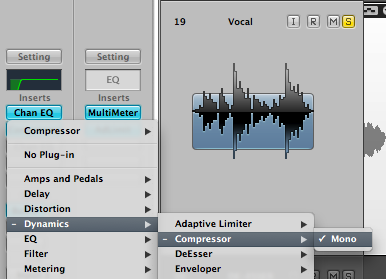 Now let's side-chain our vocal compressor to the de-esser track. 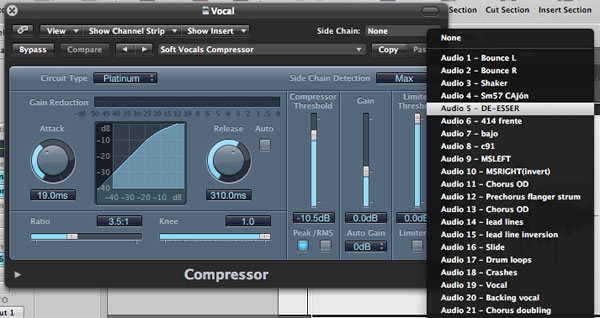 Now everytime an S comes through in the singing we should be
seeing the compressor react.

Step 4 – Tweak Your Compressor for a Subtle De-essing Effect

We need to tweak our compressor so our de-essing isn't an audible
effect. We don't want anyone to notice the compressor working. We
want it to subtly cut out the S's and leave everything else intact.
Because we're only channeling
the compressor to that certain sibilance frequency, we can have it work pretty hard without it crushing the rest of the
audio. As said before, it's side-chained to the frequency area around
7 Khz, so we'll push the compressor pretty hard in order to get rid
of the sibilance.

I set both the attack and release fairly fast because we don't
want the compresor to linger too much, as it's sole job is to cut out
as much sibilance as possible. This way, as soon as an S sound comes
in the compressor attacks it immediately but is fast to go back to
it's original position. Lastly, be sure to set the compressor setting
to peak rather than RMS because we want the compressor to be working
on the peaks of the signal but not the average RMS value of the
vocal.

Now, listen to the vocal, in context with the rest of the track.
We've eliminated a lot of the sibilance the vocal had before and now
have a more level, controlled track to work with. Now the vocal sits
better in the track, without our unwanted S's jumping out at every
possibility.

We have a great vocal track, without the sibilance. Using these
methods you can create a de-esser on any DAW, not only Logic.
De-essers are just simple frequency specific compressors, so by
pointing our compressor in the correct direction, or frequency, we
get the desired result we want.

Because you EQed everything but the S sounds of the vocals, and got
rid of the sibilance by subtly compressing them, you end up with a
cleaner and smoother track. Now you can relax, knowing that your problematic vocalist
is not going to give you problems at the mixdown stage. Never mind his
over pronounced S's when tracking, you can safely record him knowing
you can effectively dampen those sounds later on.