How to Create an Evolving Pad Sound, Using Multiple Modulations

Recently I produced a tutorial introducing the concept of the modulation matrix. The tutorial walks through some basic examples for the novice and some of you found it useful. However there were some more experienced users who wanted a more in depth look at the subject; this tutorial aims to deliver just that.

Using Logic's ES2 I have created an evolving pad / fx patch that changes over time. Each step and routing is explained and hopefully this will help most users to master multiple modulators and ultimately build their own complex patches.

Depending on what type of sound you want to build here, some basic foundations need to be laid before we start getting into setting up our modulators. After all the modulations we will be adding to our sound are generally there for a form of decoration, adding dynamics and interest. The core of our sound, here at least, is the static patch underneath.

The first patch I aimed to create was a really interesting pad sound, using the ES2 from Logic Studio. I have simply mixed a few detuned oscillators, softened the whole thing with a low pass filter and dialled in some slow attack and release settings to give the sound a pad like dynamic signature.

Of course you can try this with any sound you like, you can also use any synth with a flexible modulation system. I will demonstrate this in later synthesis tutorials using other popular instruments and as always suggestions are always welcomed!

A few MIDI chords were programmed for the purpose of the tutorial.

Ok, so it's time to create our first modulation routing but before I start the process I just wanted to stress that this is just an example of what can be achieved here, there really are limitless possibilities. It's really all down to getting creative and realising the power of your instrument's synth engine.

The first step here was to add some movement to the filter I achieved this by applying the dedicated filter envelope to filter number two. I pretty much matched the amplitude envelope's settings to produce a smooth sweep up and down as the pad is played. This simple modulation adds a nice amount of movement to the patch and is the first step in our evolving sound.

The first modulation which links the second envelope to the filters cut off.

The filter modulated by the envelope.

This movement in the filter is great but could do with a little more work. So using LFO Number 2 I applied a little wobble to the patch. In conjunction with the sweep this works really nicely. I only used a very small amount of this effect as I only wanted it to be a subtle addition. You will find that as this patch builds it is made up of many very small modifications. I find this to the best way to construct a clean but interesting patch.

Some further filter mod is added to the filter courtesy of a fast LFO.

... and some filter wobble is added.

Auto-panning can be a welcomed addition to any patch and can add real width, even in small amounts. You could add this effect by using a separate plug-in but in most instruments it's just as easy to create the effect with some simple routing.

Here I have reused LFO 2 and applied its output to the master pan parameter. This means that the pan timing is identical to the filter wobble effect added at the end of the last step. Again I have only used a small amount of this effect to keep things coherent but the effect can be heard clearly.

Another LFO is used for some subtle auto-pan.

Using LFO's is a great way to create pulsating, timed effects but if you want something to simply fade in or out over time an envelope is a much wiser choice. In previous tutorials we have seen envelopes being used for basic modulations and connected to filters and amplifiers, in this case we'll try modulating something a little more unusual.

As the ES2 has three envelopes I have used the first, simplified envelope to effect the filter's frequency modulation parameter. With a long attack time dialled in the effect is a slow increase in intensity of the effect, adding grit and character to the sound over time.

The filter's FM is slowly added using an envelope.

This type of routing can be really useful for sounds that have a slow, fading nature such as pads, effects and leads. Try using this technique with other less common parameters such as distortion effects, oscillator type or detune. The results are often strange and unexpected.

At one point or another I have shown the process for applying vibrato to a sound. This step isn't really here to demonstrate that, it's here to show another aspect of the ES2's LFOs, and thats the ability to delay the onset of their intensity.

By simply using the delay control in LFO 1 you can create a fade of the LFO's effect. This is great for introducing tremolo or vibrato effects later in a sound. This means that the initial part of your patch will be unaffected, this often makes a sound more playable and musical.

The LFO is assigned directly to the pitch of all the oscillators to create a traditional vibrato, in combination with the LFO's delay the effect is introduced nicely into the later part of our pad sound.

All the examples we have looked at so far deal with modulating one parameter with one modulator but sometimes to create special effects you may need to alter a single parameter with a number of modulators.

I have chosen to add a third oscillator here and alter its various properties with three different modulators. I have used a pulse width modulated square wave and the first modulator simply utilises envelope Number 2 (the same as the one modulating the filter cutoff). The envelope raises the level of the third oscillator and fades it in over the course of the patches development.

The second modulator uses the same envelope to change the oscillators waveform. The slow attack of the envelope means the oscillator will scan through the waveforms creating an evolving effect that adds to the intensity of the patch.

The final modulator uses the amplitude envelope to slightly adjust the pitch of the third oscillator. This adds a sort of slide or bend and gives the patch a slightly weird edge.

The final pad patch with all modulators active. 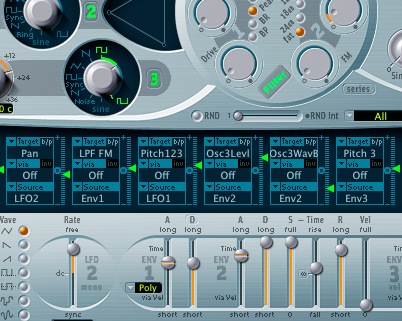 The last three modulators all effect the third oscillator in some way.

There's no doubt that all these changes are very subtle and you maybe thinking there isn't a huge difference in each step but if you now take a listen to the original un modulated in direct comparison to the final patch you should find that these small changes make a big difference.

With a little reverb and a few very basic percussion elements added and you can see how this sort of sound could work in an arrangement.

A bit of reverb is added.

And a few bits of percussion.

The final patch in action.