If you’re in the business of writing music that’s intended to be performed by other musicians, then you’re also in the business of teaching others to perform what you write. Even if you want your parts to be interpreted and improvised, being able to communicate what you’ve written in a clear and accessible way is essential to the creative process and ensuring the integrity of what you write.

However, many self-taught musicians may not have the skills to read and write formal musical notation, so in this tutorial, I’ll be showing you a nuts and bolts, easy peasy approach to creating and sharing simple scores for your music.

Do Rae Me So Fa I’m Lost

Just because you’ve never drawn a treble clef before doesn’t mean you can’t go old school and write your music with pen and paper, but it probably does mean that you're in for a steep learning curve. Lucky for us, then, that there’s plenty of software out there that will give us a range of other ways to turn our music into dots and lines.

The professionals typically head for something like Sibelius (Windows and Mac, various prices), but if you don’t have that kind of budget, two popular choices are Arobas Guitar Pro (Windows and Mac plaforms, €59.95) and Power Tab (Windows only, free). Incidentally, despite their names, both lend themselves to instruments other than guitar!

Whatever you choose, most, if not all modern notation applications have several functions – for example virtual keyboards and fretboards with which you can enter notes and chords, and the ability to import MIDI files – that will make creating basic scores easy enough for even the most theory-phobic of songwriters.

Exporting Scores From Your DAW 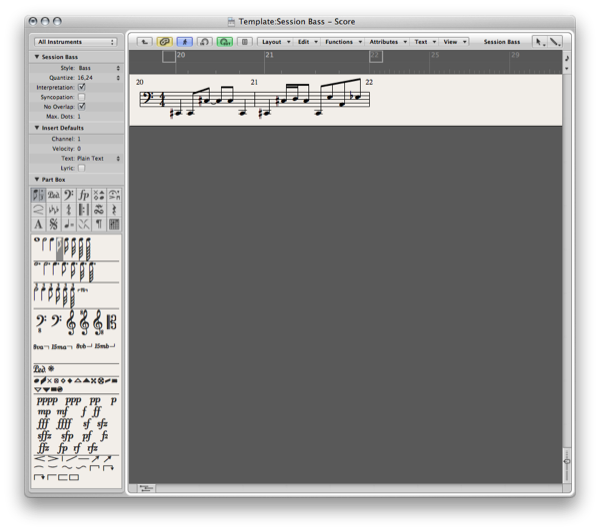 If you’re writing musical ideas using software instruments in your DAW, there’s a good chance that your DAW will be able to output a transcription of those parts for you. If your DAW has that facility, then the whole process should be as easy as a couple of mouse clicks. The only drawback with this method is if your songwriting, like mine, is done with a mix of real and software instruments. In that case, you’ll probably want to have the whole song written out in one score, and if your DAW doesn’t have any advanced score creation features, that means using a dedicated notation program.

For me, a typical scenario is that I have a project in my DAW consisting of programmed drums and bass, and one or two live guitar performances. So here’s my method of getting a song idea out of my DAW and on to paper using Guitar Pro 5: 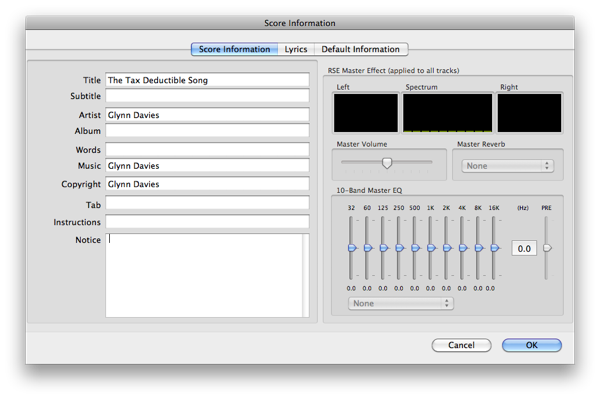 In Guitar Pro, create a new score (File > New or ⌘N) and, in the Score Information dialogue (F5), add the track’s details. Incidentally, while it might seem a little silly and grandiose to put your name in the “composer” field, it’s anything but. You never know in whose hands your scores (and therefore your ideas) may end up, so it’s worth taking any opportunity to assert your authorship.

If there are complex MIDI parts, I’ll import them to a track (File > Import > MIDI), but in most cases it’s simpler for me to add basic synthesised parts by hand.

Looking for the Impossible

It’s worth remembering that your DAW doesn’t know what a fretboard looks like. If you’ve imported a MIDI part, read through it carefully to find any instances where the notes are musically correct but physically wrong. For example, a guitar chord which has notes stretching from the 5th fret all the way to the 12th fret!

It’s often a good idea to map out the song on paper first, noting the song’s components, e.g. intro, verse, chorus, etc., and also any repeated sections. Using this you can avoid duplicating sections unnecessarily, adding musical directions (if you know how to use them) or making written notes, e.g. “Verse 2 same as verse 1” with the text tool (accessed via the floating Tools Window, or by hitting T) if you don’t.

Adding standard notation is easy using the graphical keyboard or fretboard (Window > Keyboard / Window > Fretboard) to enter the pitches, but if you can’t read music, getting the note durations correct will mean a little learning and some trial and error.

Fortunately, the trial and error element needn’t be as laborious as it sounds since Guitar Pro and many other notation applications offer a playback function (Window > Play, or hit spacebar), allowing you to quickly verify your score by ear and make adjustments as necessary.

For guitar and bass players, life is a little easier thanks to tablature, which can be entered either directly onto the stave or via the graphical fretboard. In either case, the software will automatically write a traditional notation for you though, as before, this is worth paying some attention to in order to ensure that duration values are correct.

For most musicians, especially those who don’t read, having chord names and (for guitars) diagrams is a big help. Naming chords correctly can seem complicated, and often there isn’t one “correct” answer, but yet again software saves us. Just select the chord you wish to name, click the Chord tool (Tools Window, or hit A), and select from the list of suggestions. Typically, a chord’s name will be based on the root (usually the lowest) note in the chord, so if you’re stuck, that’s usually a good guide. For more detailed information on chords, check the Further Reading section which is… next!

Hopefully this tutorial has inspired you to tackle making scores for your music, and hopefully you’ll find that, in the process, you’ll learn a lot about musical notation and music in general while having some fun in the process.

To help you along, here are some tools I’ve found useful for building my knowledge of notation and musical theory:

And, from right here on Audiotuts+: