In this tutorial, we're going to learn how to make and mix a “running” 16th-note bassline. You'll hear this in countless dance genres such as techno and even breaks, but it's become synonymous with trance over the years.

Here's a basic pattern on a nice synth tone: as you can hear, this doesn't need to be a mind-blowing patch, but something with some top end “rasp” as well as a bit of body is really useful for this kind of sound. Moogs and ARP's (check out Arturia's venerable software versions) are a good place to start when you're looking for tones. You could always use a low layer and a mid-range layer if you don't happen to hit on a sound which does the whole job.

Here, I've positioned the notes to keep them out of the way of the 4/4 kick. This is generally a good plan if you're using a powerful bass tone, but there's ways of dealing with it if you really need an overlapping bass and kick.

Note velocity is sent to the filter cutoff on this patch, so it's nice and easy to give each individual note its own cutoff value. This creates a more interesting bassline texture. You can obviously set these values to whatever suits the track you're doing: sometimes it's better to keep them more regular or repetitive than I have them here. 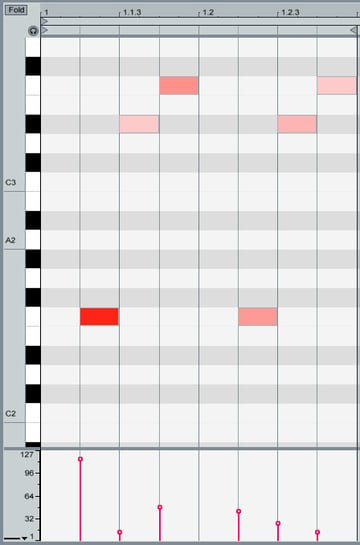 It's time to beef up the sound itself, so we'll grab an instance of PSP VintageWarmer 2. VintageWarmer is a strange beast but its Bass Line Track preset is great for introducing unholy amounts of bass. Essentially, what's happening here is that we're compressing, EQing and slightly overdriving the sound simultaneously, so if you don't have VintageWarmer you can replicate this with other plugins.

Common tweaks with this preset are reducing the Mix balance and cutting the amount of Low boost. It'll make things fat and full but you don't want to overwhelm the track.

Also, adjust the limiting to taste. You may not want to squash your bassline out of existence, so try to focus on getting a characterful compressed sound when you're adjusting those parameters. 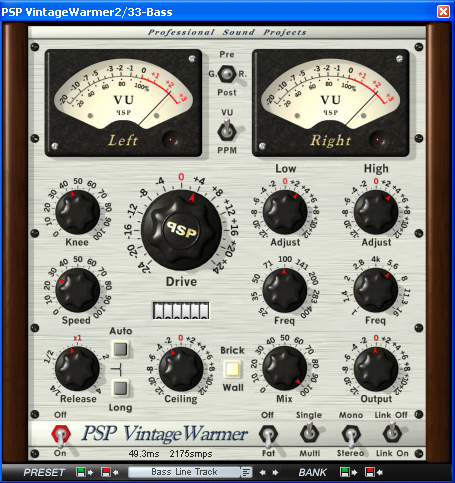 I like to use a utility EQ to control the lows that VintageWarmer introduces. You may think that's slightly odd behaviour when I could just simply reduce the amount of boost--and you'd be right--it's just sometimes easier when you know there's a huge amount of sub to tweak it gently with a secondary EQ. I took a little high dip at around 9k on this sound as there was some harshness there. You need a clinical EQ for this. The built-in EQ in your DAW will probably suffice.

Harshness is generally extremely subjective in trance at the moment, with some of the top producers using some truly mind-shredding highs: it's up to you whether you want to follow this trend or not.

Now we've got a decent sound in place playing a pattern we like, it's time to try and fit it into the mix. I'm going to use some sidechain ducking to start with, so I'll create a channel with a “silent” kick drum. I've called it “Trigger”.

This channel doesn't play through the master output so you don't hear this extra kick. The output has been sent to the input of a Sonalksis compressor on a channel called “PUMP”...

Here's the compressor we're using. Now we just need to route our bassline through it and then play with the settings until we get a noticeable “sucking” whenever the kick drum hits. This will help to avoid nasty clashes between bass and kick.

If you're a compression buff and you know exactly what you're doing with these settings then that's great. However, you'll find a lot of producers simply tweak around until the sound is effectively what's needed, so don't worry if you're not totally familiar with each parameter. Keep working at it, as getting this aspect to sound right can be quite challenging.

You can hear the effect with the kick playing here:

That central bass tone is sounding great, but perhaps it could do with a layer. Here we've used a basic synth tone with some of Live's native effects on it to make a bit-reduced high layer. If you're adding highs, try to keep them quite low in the mix. If you have two layers playing at equal volume that don't blend together, you can get an annoying “cartoony” sound that's probably not what you were after.

Layers often benefit from a little stereo spread and a tiny sprinkling of 4k and/or 10-12k, and you can send them to your “PUMP” track as well if you want them to breathe with the bassline.

Running basslines can be quite hard to get right but they're a really powerful way of driving the groove in most kinds of dance music. Experimenting with just how big a sound it's possible to fit in your mix is worthwhile: it'll help you to get a good chunky base on which to build everything else.

Hear this technique in use:

You can hear the rest of the track (“Geometric Requiem”) that this tutorial was taken from over at http://www.nervoustestpilot.co.uk.

Paul Taylor
Paul Taylor is a writer, musician and game developer from Oxford, UK. He writes regularly for Computer Music magazine, and has released tracks as nervous_testpilot on London's Nu Energy record label among others. He's currently working on a new game soundtrack for Mode 7 Games (http://www.mode7games.com), as well as on improving his engineering and production abilities.
Looking for something to help kick start your next project?
Envato Market has a range of items for sale to help get you started.