Quick Tip: A Few Ways to Avoid Pops and Clicks in Your Audio

I'm often asked by my students why there are pops, clicks and crackle in their mixes. The answer is never a 100% straight forward one as the causes of this annoying issue can be pretty varied.

Let's take a look at some of the possible causes for these nasty anomalies and how they can creep into your audio. We'll also talk about how to avoid these problems as you go. Just for the record, these examples assume that you have thoroughly checked your original recordings for errors and clicks.

One of the main causes of clicks, pops, errors and dropouts in any digital system is CPU overload or buffer overflow. These problems are most commonly caused by the amount of memory used for the buffer being set too low.

Low buffer settings are perfect to keep latency to low and will work well with stripped down projects but as the CPU load increases there is a risk of inducing clicks and pops.

To resolve this you should keep a constant eye on the buffer setting and make sure that you raise it as you move through your project and your CPU needs increase. This way you should stay clear of any clicks and pops. 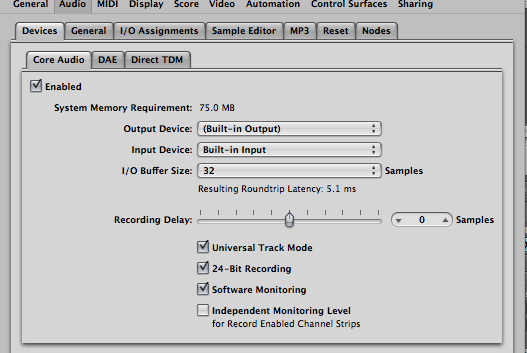 Another major cause of clicks and pops is bad looping. The accuracy of audio editing in most DAWs is so good these days there is pretty much no excuse to let this one slip through the net.

Try to spend some time on every loop you use to ensure playback is 100% smooth. Simply playing the files in isolation may be enough here but if you find a problem you may have to resort to using a simple crossfade or a ‘snap to zero crossing’ editing mode.

This level of quality control will ensure that the critical loop point is a smooth transition and does not contain any problem areas. This may seem like a small thing but get one of these loop points wrong and you could potentially hear the click produced hundreds of times in an arrangement.

Fine tuning a loop in Logic to avoid clicks

Look at Your Envelope Settings

A more unknown culprit when it comes to nasty noises is the envelope settings of synth patches. The clicks created here are usually more noticeable in simple sub bass style patches but can crop up in other similar sounds.

The problem arises here when a zero attack and zero release setting is used. This essentially means the envelope is trying to go from zero to maximum amplitude in no time and then back to zero with the same lightning fast response.

Although some synths will do this pretty well a small click at the start and end of each note can be produced. A simple solution here is just to add a little attack and release to the sound. Even a millisecond or two will create the right result and remove the chance of any click begin introduced.