Quick Tip: Have A Backup Plan

There is one major fear when it comes to working with computers, a hard drive failure. Hard drives will fail and they always occur when we least expect it. And when the drive with all your session files crash, it is a disaster. I’m always told “If the file does not have two copies, it doesn’t exist.”

It does not take much to formulate a backup plan and it isn’t that difficult to keep to it. Especially if you have encountered a case of data loss before, you will certainly motivate yourself to stick to it. 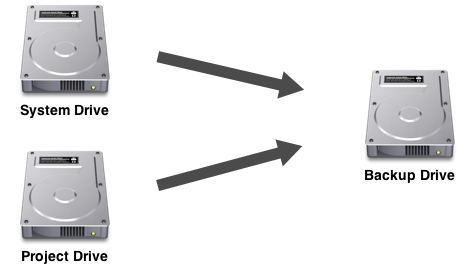 You can also backup your sample libraries but quite often you can recover those from your installers if you do not want to use more backup space. That would fall under personal preferences.

Using an automated backup system takes the pain out from remembering to backup your data. It runs on a scheduled time and knows what backup source and destination. There are many software solutions out there that allow you create such a backup system.

Depending on your choice of a PC or a Mac, the software and method that you would use will defer. Being a Mac user, I will be able to recommend some specific choices for the Mac but it will not be difficult to find a piece of software that does the same job for the PC.

My choice of software for the Mac is Carbon Copy Cloner. It allows me to schedule a backup task and choosing my source folder and destination folder. These are just basic functions that most backup software will have.

Choose a good time for the backup task to run. Obviously, the computer will need to be running at that point of time. If you chose to do an incremental backup, the task will not take long unless you constantly make huge file changes to your drive. I am only working on individual projects at a time so my backups usually take a minute or less.

You can also choose to run the backup manually when you wish to. This could be after a large amount of work and you’re playing it safe. 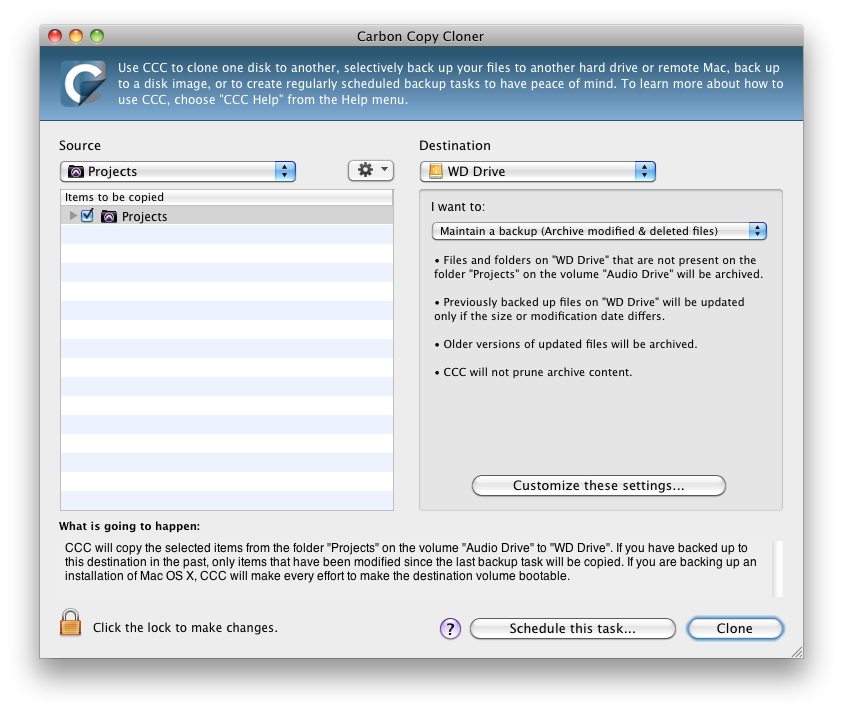 There are slight differences in the type of backup that you can choose from. The differences are how the program handles data that have changed.

Firstly, there is the clone option. The program just ensures that there is an exact clone of the backup source. Files that no longer exist on the source are deleted. This type of backup will help when you have a drive failure but does not help if you need to recover a file that you had deleted.

Secondly, there is the backup and archive method. Files that have been changed or deleted are moved to another folder and archived. This takes up more space on your backup drive but provides the possibility of recovering a file that you have deleted.

For Mac users, Time Machine which ships with OS X was designed to help recover from such a disaster. However, it still takes a few hours for your drive to be restored using a Time Machine backup. You can use a backup software like Carbon Copy Cloner to perform an exact clone of your system drive to reduce the time needed.

For Windows users, the backup methods mentioned above would work well too. However, a backup and archive method would require a lot of backup space since files changes are much more common on the system drive. A standard clone should suffice for most users.

Its Not That Complicated

Building a backup plan might sound complicated but it is rather easy if you take it a step at a time. Know what is most important to you and make sure you have an extra copy.

Hector Lee
Hector Lee is a sound designer and engineer based in Singapore. With experience spanning from sound design and music production to crafting sound art installations, he actively engages in collaborations with artists from other disciplines. His works and collaborations have spanned a wide range including theatre, live electronic music, dance, music composition, audio programming, interactive sound art installations, etc. He also blogs about music and audio technology on soundgrains.com
hecty_
Weekly email summary