by Brandon DavidsFeb 17, 2011
Read Time:3 minsLanguages:
GeneralPro Tools
This post is part of a series called Creative Session: All About Compression.
Quick Tip: Super Quick Parallel Compression
How to Use Multi-band Compression in Mixing and Mastering

Parallel compression has long been a part of the arsenal of engineers the world over, traditionally used on drums but can be used to great effect on just about any manner of audio signal. Today we will look at using the Bomb Factory 'BF76', which comes standard with Pro Tools to get some great compressed drum sounds.

In the following screen shot we can see 8 audio tracks of drums. 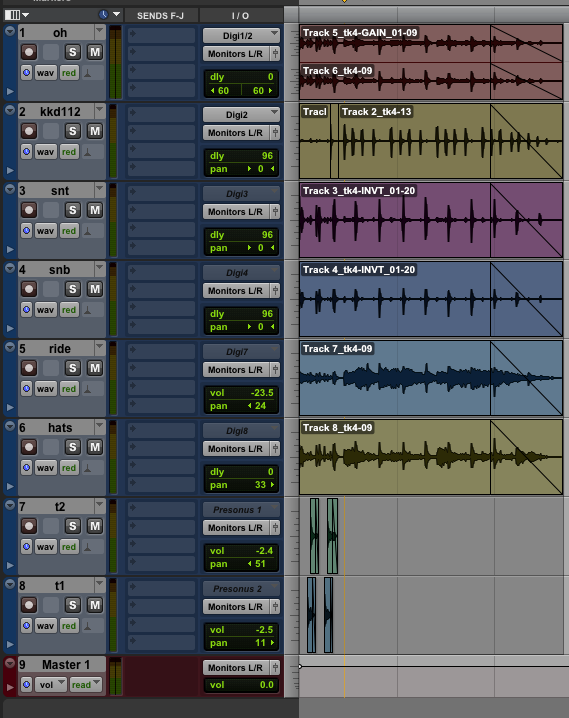 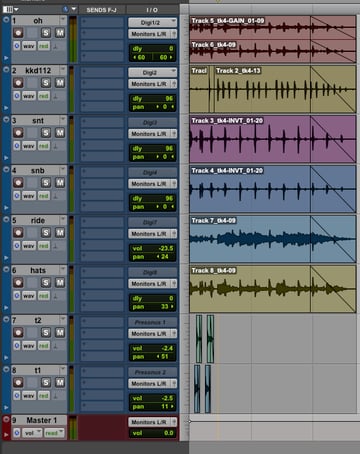 They have been lightly processed with various EQ/reverb and dynamics plugins, but they could handle some parallel compression, have a listen to the 'raw' drums below.

Create two new stereo Aux Tracks, using the shortcut Shift+Command+N, name it something appropriate like 'Drums' and 'Para_drums'. Then set the input to a free bus. In the screen shot below, I am setting the input of my tracks to 'Parallel 1', which is really just Bus27-28. I have renamed certain busses to allow quicker navigation throughout large sessions. 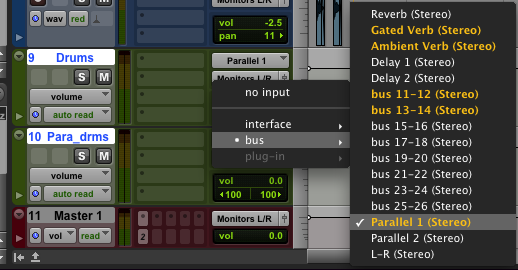 Set the outputs of each of your drum tracks to the bus you have just selected on each of your Aux Tracks. You have now created two Aux Tracks receiving the same drum signal. 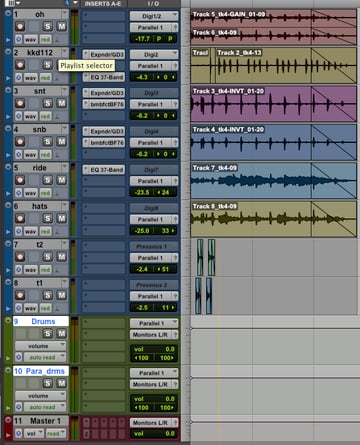 Now insert a BF76 compressor on the Para_drums track, solo the track, and set the attack, release and ratio as seen in the diagram below.

The BF76 is a virtual recreation of the vintage '1176' compressor. This compressor had some idiosyncrasies, such as the higher the number the faster the attack and release, and for some reason when you slam all the ratio buttons in, it produced this creamy splatter of massive compression. Obviously the BF76 isn't going to be as good as the real thing, but for a plugin that is standard with Pro Tools, it is very impressive.

Before we start compressing, put all of your drum tracks into 'solo safe' mode, by holding the command key and left clicking on the solo button of each drum track. This ensures that when we have our 'Para_drums' track solo-ed we will still hear drums.

Now turn your input all the way down and press play. Slowly bring the input of the BF76 up until you are happy with the compressed drum sound, remember you can get away with a bit more compression than usual as we are going to be mixing the parallel compressed drums under the original.

This is the sound I'm after, it is pumping and breathing quite heavily, but this won't be as noticeable when mixed in appropriately

Now unsolo your 'Para_drums' track, turn the volume fader all the way down and then bring it up under the finished drums until you are happy with the sound.

Listen to the final mix below, the effect is subtle but gives the drums extra punch that they perhaps lacked before. You can achieve much more dramatic effects with some time and patience!

Take your time and tweak the settings, see how minor adjustments of each of the parameters affects the outgoing signal. Note that there isn't a threshold parameter as such. This style of compressor uses the input parameter as a sort of pseudo threshold control, the more you push in, the more it will slam down the sound. This really only touches the surface of the power of Bomb Factories BF76, experiment, have fun with it, google 1176 and read up about the original. Knowledge is power!