Quick Tip: Use the Overtone Series for Effective Chord Voicings

In a previous tutorial I briefly explained the Overtone Series. In that tutorial I mentioned that the series could be used as a guide for effective chord voicing. In this tutorial I'll explain what that means.

The Pattern of The Overtone Series

Here is the overtone series based on a fundamental pitch of C:

For our current purposes the most important thing to notice is that the intervals are spaced widely at the bottom and close together at the top. This will be the fundamental principle we use in chord voicings. Keep the lower voices more than a 5th apart and try keep the upper voices a 5th or less together. More than an octave between upper voices should always be avoided unless for special effect.

Towards the bottom of the series we only have octaves and fifths, it isn't until the mid to top range that we have thirds and seconds.

Let's put this knowledge into use.

Voicing A Chord For Strings

When you decide to write a chord for an ensemble of instruments it can feel like there are an unlimited number of possibilities for deciding which pitches to put where. If you want to voice an Em chord and all you know is that you need to have an E, G and B, you can be left guessing what to do with them.

Using the overtone series as a guide, you can instead have a reliable rule of thumb for a voicing that sounds clear, balanced and strong.

We don't have to follow the series literally pitch by pitch, but we should remember to keep the bottom voices spaced widely apart and the top voices close together.

Here are a few ways to use the 5 instruments of a string section to voice an Em chord, based on the principles learned from the overtone series:

The first voicing feels muddy in the bottom and thin near the top, whereas the second has a supportive bottom and full upper range.

Doubling of the 3rd

As you may have noticed, we were using 5 instruments to play a 3 note chord. This obviously means that some notes are going to have to be doubled.

As a general rule you should double the octave first, the fifth next, and the third last. Again this idea can relate to the overtone series: the third is a higher overtone and therefore a harmonically richer and more complex tone. If too many voicings are playing it, it sticks out to much and can destroy the balance of your chord.

If you're voicing a first inversion chord (a chord that has the 3rd in the bass), you want to pay special attention to this rule and make sure that you don't double the 3rd anywhere else in the voicing. Of course this will create a bit wider space in the top, but if we keep the voices within an octave (preferably within a 5th) we'll be OK. 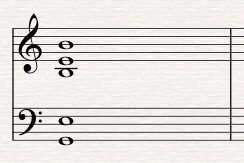 This concept of voicings isn't just for strings. The principles are true for any grouping of instruments, be they brass, woodwinds, synth pads or human voices. The key takeaway is this: Wide intervals in the bottom, close intervals in the top.