The Low Down on Chorus and Unison Effects

Chorus and unison effects are pretty much the most common modulation effects there are and it's likely you have used them in your mixes before. To really get the best out of these processes its essential to understand whats going on under the hood.

This tutorial takes a look at the fundamentals of modulation effects and their inner workings. If you guys find this useful and want me to continue with more advanced modulation based processing let me know and I'll put something together.

Many of you will already have experimented with Chorus effects and you may have come across Unison in soft synths and other instruments in your collection. It's always surprising to me how many students I teach that use an effect but have never looked into how it works.

It's likely that you have already worked out that inserting a chorus plug-in makes things sound wider and generally adds depth to your sounds. Engaging the unison function on your soft synths will have a similar effect, giving your synth patches a richer more appealing tone. So, let's take a look at how the effects achieve this sound and how we can control the out come.

The exact way in which a chorus unit works can differ slightly from one manufacturer to another but the general principle is the same. The incoming audio signal is duplicated and then de-tuned, the amount of detuning is then modulated (changed over time) by a dedicated LFO (low frequency oscillator).

Some chorus effects may achieve their separation between this duplicated signal by using small delay times. Whether the chorus uses pitch, delay or both, it's this difference between the two signals that creates the width and shimmer that this effect is famous for.

The amount of parameters differs from unit to unit as well but generally the amount of delay, detune, LFO speed and depth can be controlled. The modulation from the LFO is really the element that gives many chorus effects their organic, dynamic feel.

Unison is a similar effect to chorus but is usually a little more stripped down, featuring fewer controls. This simplicity is due to the fact that these effects are often static with no LFO modulation. This means that they do create duplicate signals but in most cases only detune or delay the duplicate. This provides a simple thickening of the sound with no frills and a no hassle approach.

Many of these effects, be it chorus or unison, will also provide stereo enhancement. This is achieved through the duplicated signals being panned to the left and right of the stereo field. Some of the original signal may also be left in the centre to retain clarity and punch. Often unison effects will have controls for the amount of 'voices' used and these will be spread in increments across the sound stage.

Most DAWs come with one or two bundled chorus units now and you on the whole you can expect the quality to be pretty high. Logic, Cubase, Ableton and Reason all provide studio quality chorus effects that would of only been available in hardware units five or so years ago.

If you are after subtle thickening effects then shallow modulation depths are called for. The beauty of using a shallow depth is that you can use slow or fast modulation rates without over colouring your sound. These light chorus patches will range from slow meandering textures to faster almost vibrato like effects. Great for a range of instruments including guitar, keys and vocals.

The Logic Chorus plug-in used in this example.

Step things up with higher depth settings and you will start to produce some really interesting creative effects. The pitch of your audio maybe effected pretty heavily here, so maybe not something for key instruments but anything from underwater drones to fast, robotic warbles can be produced.

Whether you decide to use something light or heavy, try starting off with an initialised patch and go from there. Often going from a zero setting and moving up towards your processed sound will give you a better result and can avoid the mistake of over processing your audio.

In most cases you will choose to use your chorus effect as an insert but if your plug-in lacks a mix, or wet and dry control you may want to experiment with a send / return configuration, effectively giving you a parallel chorus effect that you can mix in to taste with your original sound.

Often soft synths and even samplers will have a built in unison effect in the voicing section. In most cases this will be a simple one knob control but occasionally will offer extra adjustable parameters such as amount of unison voices and detune. On some synths you may even see a stereo width control. 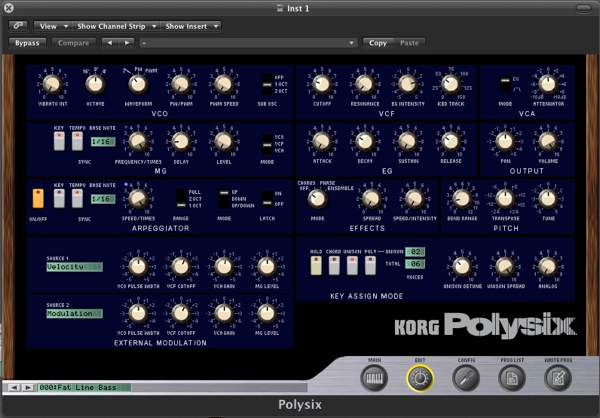 The Korg Polysix synth with Unison used in this example.

As I mentioned earlier this is a more streamlined, static effect but can add some real depth to pad and lead sounds. A good unison effect can often completely eradicate the need for an extra chorus unit later in the signal path. As with any modulation based effect you will gain width and depth but you can also lose some of the original sounds focus. The perceived volume of the patch may also be lowered by adding heavy stereo effects.

Synth with no Unison:

Although this effect is mainly seen as part of an instrument, occasionally you will see it as a standalone processor. Reason 4 for example offers a unison processor that is based on the classic synth effect.

A great way of achieving natural chorus type effects is to employ double tracking when recording. This is basically involves recording two or more alternate takes and panning these left and right. This stereo spread mixed with the natural variation of the takes produces modulation and extra harmonics.

There is an excellent tutorial on backing vocals and another on double tracking, so perform a quick search to find out more about this technique.

If you don't do a lot of recording and produce entirely in the box you may think you won't have the chance to get into this technique but you can get pretty close. Simply duplicate the part you are working with and place it onto a separate track. This new track can then be delayed by a few milliseconds, using either a plug-in or the tracks delay settings. Now pan these tracks hard left and right.

The result is a wider richer version of the sound. This is neither true chorus or double tracking but the unison type effect created is certainly useable and can produce good results. For an extra edge here try inserting a pitch shifter to one side and automating very small amounts of shift over time, this method can emulate the LFO in a chorus unit and add some modulation and dynamics.

Step 5 - Ensemble and Other Chorus Effects

Some chorus plug-ins go above and beyond the call of duty and offer an extended range of features, some even offer emulations of classic units that performed special chorus based effects. These processors obviously vary drastically but often have their roots in the basics of chorusing that we have looked at in previous steps.

A few good examples of these 'super' chorus units are the 'Ensemble' plug-in that is bundled with Logic Pro 9 and Universal Audio's emulation of the classic Dimension D. The Logic Ensemble offers multiple voices and dual LFOs. The Dimension D on the other hand is very simple but boasts absolute clarity and no degradation of the signals dynamics. Here's a few real world examples of the units in action...

The strings with a 5 voice Ensemble patch applied: