Apple's tablet has been coming for quite some time now. The little device has inspired more dreams, guesses, mock-ups and rumors than just about any other toy in history. Other companies have been racing to get their own tablets out before Apple. And maybe you've been dreaming of the possibility of the perfect music production machine inside a small tablet. Can the Apple iPad possibly live up to all that hype?

Today the rumors were replaced with facts. Many have been disappointed with the iPad, while others are thrilled at its lower-than-expected price. Now that we really know what to expect, will the iPad - or perhaps some other tablet - change the way you make music?

If you still haven't caught up on the news, check out Mac Appstorm's review of the iPad first, then come back for the rest of the article.

I've enjoyed using some small gadgets for music production in the past. I spent most of the 90s with a tiny Toshiba Libretto sitting on top of a Roland RD-500 running MIDI software. I also owned a small Windows 3.1 tablet, and more recently produced music on the tiny Roland "Personal Music Assistant". Small gadgets can be useful for music production.

How useful will the iPad be? And how much will the iPhone OS compromise that usability? 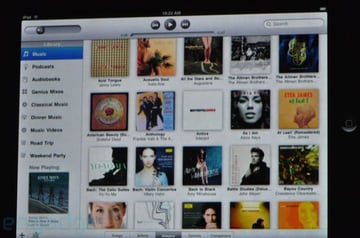 There is little doubt that the iPad will be a very good media player - it runs the same software as the iPhone and iPod Touch - only larger. The larger size makes it a very hefty music player, but will be a benefit when watching movies and surfing Youtube. And the 10 hour battery life will keep it playing longer than your iPhone.

One concern may be that you now have yet another device to sync with your massive MP3 collection. In his article iTunes for Composers, Ryan Leach describes a program called SimlifyMedia which allows you to access the media collection on your home computer on your iPhone from anywhere. The iPad may be a good use of that program.

How would you rate the iPad as a media player?

The iPad will be coming out in 16, 32, or 64 GB versions. If you want to use the iPad to store your music portably, you'll want to choose the 64 GB version - you won't get a USB port or SD card slot, so there is no way to increase the storage.

However, it does come with 802.11n Wi-Fi. That will make it quite speedy when accessing files wirelessly on your home network.

Does the iPad have enough storage for your needs?

The iPad is light and slim, making it very portable - it has a great form factor for sitting on a music stand. It also has a big emphasis on ebooks. I don't know whether there is currently any sheet music available for the iPad, but I can imagine having all of my chord charts stored on the device, placing it on top of my keyboard, and following the music as I play.

Mazin is on the same wavelength, and posted this photo of his sheet music on a Toshiba tablet, placed on his piano ready to be played. 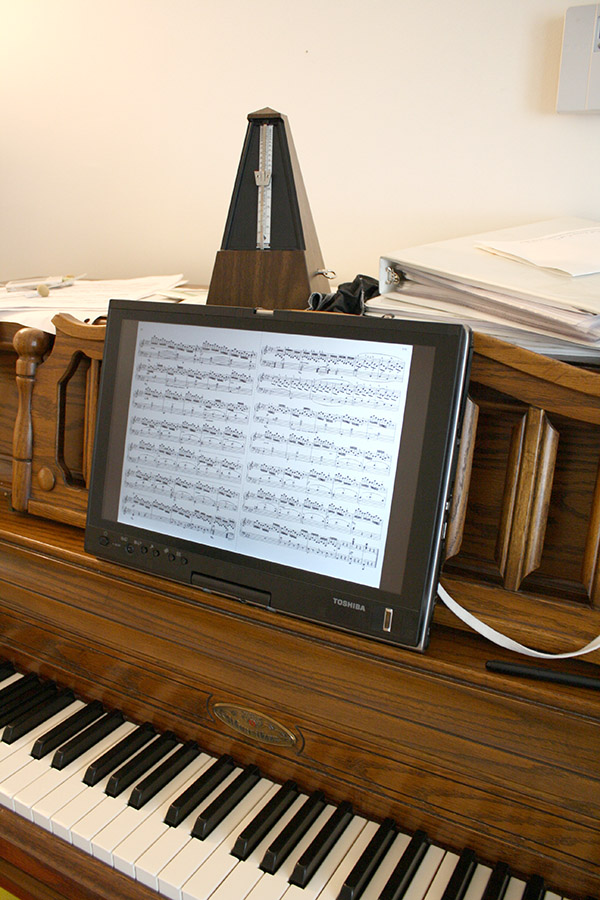 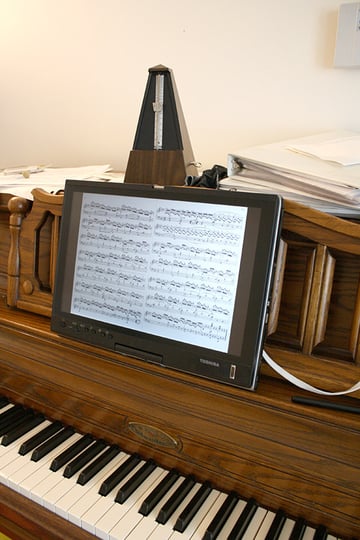 If you already have a large collection of sheet music on paper, this may not be for you. Could it be the way of the future?

You type on the iPad using an on-screen keyboard. You play games on it with on-screen controls. Would it be practical to play music the same way? This mock-up of the "Macbook touch" suggests it might be worth trying. 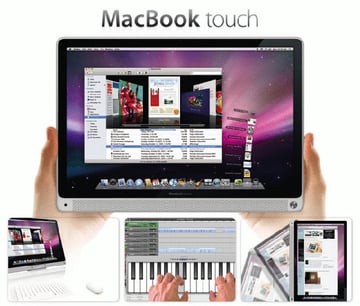 That may be OK for short and simple passages, but for real playing we're going to need a real keyboard. While the iPad doesn't have a USB port, a USB adaptor to the iPhone-like 30-pin connector may be practical. It looks like the iConnectivity guys (among others) are on the job.

Have any of you tried something like this on your iPhone? Does it look promising?

The iPad comes with a built-in microphone (which may be OK for capturing some sounds), but what about attaching a real microphone?

Again, a number of iPhone-loving audio companies are coming up with solutions. If you're interested, check out these articles:

That means carrying around extra gear, which makes the device less convenient and portable. Is it worth the extra work?

I can't imagine using something this small as my main production machine, but for something portable the 9.7 inch (1024 x 720) screen and 1GHz Apple A4 Chip processor sound pretty good.

But you won't be able to run your usual DAW software on this device - at least not unless Apple port Logic Pro (or even GarageBand) to iPhone OS. So you're stuck with using iPhone apps.

In an AudioJungle blog article Joel Falconer describes some of the audio applications available for the iPhone. Unfortunatly, none of these really look like DAW replacements. And when I scroll through the iPhone audio apps that have become available since that article, I'm still not convinced there is anything out there that will get the job done.

What do you think? Have you found an iPhone audio app that you're happy with, and will work on the iPad? Or do you feel it's likely that Apple will port one of their own audio apps to the iPad?

Today I feel much less positive about producing audio on the iPad than I did yesterday. The rumors were much more compelling than the facts! The lack of ports and cut-down operating system make this device less than ideal for music recording.

On the other hand, dozens of companies are clamoring to bring out tablets with an ample supply of USB ports, and an operating system that can run full-featured DAW software. Are you tempted by the alternatives?

Or do you see tablets as being a useless fad that will pass away, leaving you happy and content on your iMac or Windows machine? Let us know in the comments.