Mixing is a crucial part of music production and live performance. Win this book to learn just about everything you need to know. To enter, all you’ve gotta do is comment! One random commenter will be chosen as winner. Too easy.

This week's winner (picked at random) is Magnus, who left the comment, "Heard lots about this one. Would love to win it. =)" Congratulations - we'll be in touch with you shortly.

If you didn't win and would still like the book, check it out at Amazon.com. 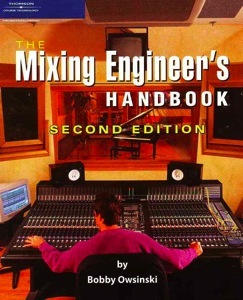 For the chance to win Bobby Owinski's book The Mixing Engineer's Handbook (pictured above) all you need to do is comment. Make sure to include your correct email address with your comment so that we can contact you. This giveaway is open worldwide, but make sure to get your comment in before midnight this Saturday, Pacific Eastern Standard Time.

The Mixing Engineer's Handbook shows you:

A lot has changed in the recording industry since the first edition of The Mixing Engineer’s Handbook was published in 2000, so the 2nd edition provides completely new and updated information about the things relevant to today's mixing, including tips for getting a loud mix, mixing for Internet distribution (including MP3 encoding, streaming audio, and extensive audio codec details), and surround sound mixing. Guaranteed to help you get a great mix regardless of what kind of studio you’re mixing in or the kind of music you’re mixing, you’ll find your mixing chops getting better with each chapter.

There's also a completely new chapter on how to get the most from mixing inside your computer (“In The Box”), as well as a new section on the relationship between the bass/drum and how to make this difficult part of mixing easy.

A long-time veteran of the music industry, Bobby Owsinski has produced and composed for records, motion pictures and television shows along the way. Currently a principle in the content creator 2B Media, Bobby has also penned hundreds of articles for many popular industry trade publications and has authored several books that are now staples in recording programs in colleges around the world including “The Mixing Engineer’s Handbook”, “The Recording Engineer’s Handbook”, “The Audio Mastering Handbook”, “The Drum Recording Handbook”, “How To Make Your Band Sound Great,” and “The Studio Musician’s Handbook.” Bobby is a regular writer of our Plus tutorials.

If you miss out, check it out at Bobby's website or buy it from Amazon. Yes, there is a Kindle edition. See the table of contents or read an excerpt.

Please note: Envato staff and people who have written more than two tutorials/articles for a Tuts+ site are not eligible to enter.