The use of Gate Effects has become increasingly prevalant in today's music scene. Typically used for supressing noise, gates are also useful creative tools for creating choppy, glitch effects. In this tutorial, we'll show you how to create a triggered noise gate effect in Logic Pro (though the principles would be the same in any DAW).

Firstly, we'll need to choose a sound that is relatively sustained. Pads, long vocal lines, and slowly moving leads are all good choices here. This will be the sound that we'll be gating in later steps. For this tutorial, I've chosen an ES2 pad.

Next we'll select a sound to act as the trigger for our gate. There are numerous ways of triggering a noise gate, but generally speaking you'll want something that is rhythmic, percussive and has high transients, so that the gate can be triggered quickly.

For this tutorial, we've chosen a loop from Logic's loop library, and applied some bit-crushing FX to give it some flavor.

Now that we have our core ingredients, let's start arranging. We'll place our loop on Audio Track 1, and this will act as our trigger for the Noise Gate plugin.

Our pad is placed on the first Audio Instrument Track.

Next we'll insert the Noise Gate plugin on the first insert of the Pad instrument track.

The Noise Gate plugin will require some tweaks to get it to trigger the way we want. First we'll select 'Track 1' from the Side Chain drop down menu. This will force the plugin to use the drumloop as the trigger for opening and closing the gate.

We'll set our Threshold to a relatively low number. This will take some tweaking, but for this example, I've found that -35dB seems to give us the effect we're after. We'll set the Hysteresis slider to -2dB. This slider, along with the Threshold, combine to give you a lot of control over the final effect. They can increase or decrease the amount of 'chatter' (quick opening and closing of the gate). You'll want to spend some time experimenting here.

An Attack of 0, a Hold of 0, and a Release of only 10ms ensures that the gate will open and close quickly. We'll want the gate to close completely, so we set gain reduction to -100dB. This gives us a final setup something like this: 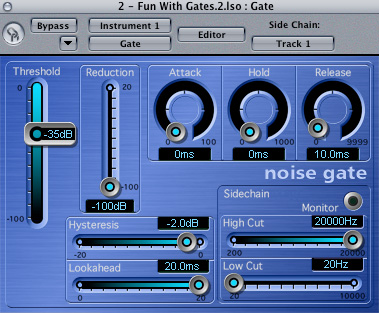 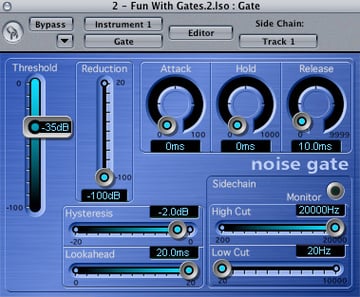 For the combined result, you'll have something like this:

Note the audible difference when we simply adjust the Threshold to -30dB:

Finally, we'll throw in a bassline, a contrasting vocal line, and another drumloop to the final mix. Enjoy!