Livecut by Smartelectronix is a VST beatslicer effect. It rearranges the incoming audio in real-time and is a great tool for generating drum n' bass-style drum fills from existing audio or VST drum loops.

However, the output can seem a little unpredictable. In this tutorial we're going to look at using Livecut to generate some fills from an audio drum loop. We'll edit the results to create something a little more subtle.

Follow along with Andy as he demonstrates the steps you'll find below in this screencast.

Generating Drum Fills With VST Livecut In Cubase 4 from AUDIOTUTS Video on Vimeo.

First, download the freeware VST effects that I use in this tutorial. Once they're downloaded, drop the .dll files into your VST plugin folder. These are the effects you'll need to grab:

Create a new stereo audio track and from the file menu, import the "Drum Loop Dry" sound file. This is just a basic loop that I created from scratch, and as is the case with most drum loops, it would sound very monotonous to use this throughout a track with no variation.

There are many things one can do with effects, sampling, and beat slicing to create fills and variations, but I find it quick and convenient to use Livecut, which can produce some surprisingly tasteful results.

Click the edit button for the drum loop track (the round button with a small letter "e" on the top left in the above picture). This opens the Channel settings for the track. Click in the space for the insert effects menu and browse for Smart Electronix Livecut. 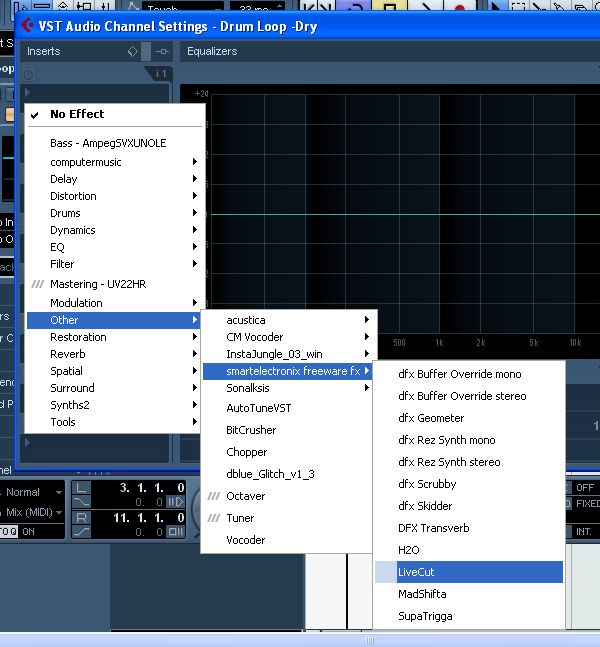 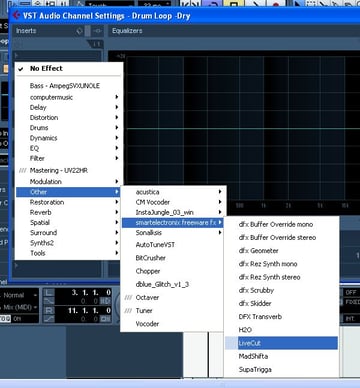 I'm just going to leave Livecut with its default settings. There are plenty of parameters to mess around with here which can produce a plethora of outlandish sounds, but the default settings are fine for the purpose of producing a few fills and variations. Close the Livecut window and Channel settings window. 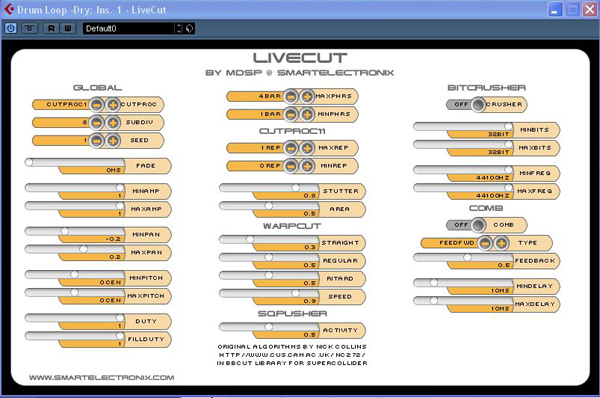 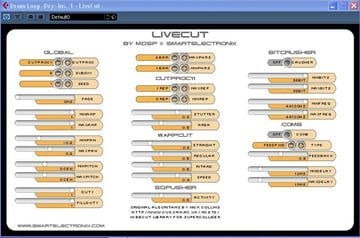 Play the loop now and you will hear Livecut doing its thing. When you listen to Livecut as an insert effect on a track you will notice that it introduces warp cuts and beat slices in a pretty random way. This can sound very interesting, but when you come to bounce the track to an audio file, you may find that you don't like some of the fills, or you don't like where Livecut has put them.

One solution to this is to chop the bounced audio up, remove any parts that don't work and cut and paste any parts that we want to keep into any order that sounds good. Place the left locator at bar 3 and the right locator at bar 11 (click and drag on the upper half of the ruler to "draw" a locator range). You will see the area between the locators highlighted. Anything between the locators that isn't muted will be exported when you mixdown to audio.

From the file menu, browse for "Export/Audio Mixdown." 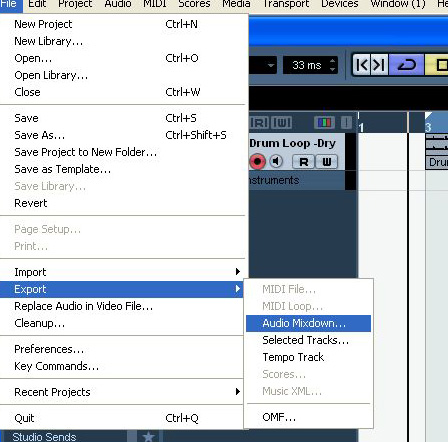 In the window that appears, give the file a name before saving it as a WAV file. In this case I've called it "Drum Loop Livecut" and opted to save it as a wav file. At the bottom left of this window in the "Import to Project" dialog, make sure you tick "Audio Track." This will add the exported loop to a new track in Cubase. 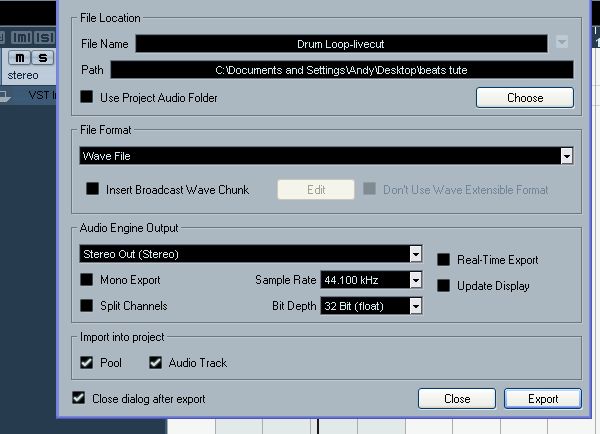 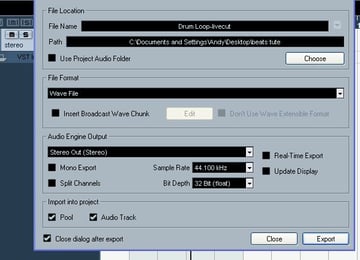 So now we have the original loop, and the new loop with Livecut applied to it.

Drag "Drum Loop Livecut" from its own track over to bar 11 on the "Drum Loop Dry" track. Click on the now empty bottom track to select it. Right click and choose "Remove Selected Tracks." This is not essential, but as we have all our audio on one track now we don't really need the other track. 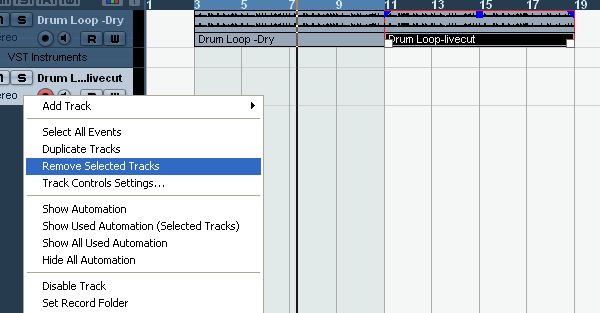 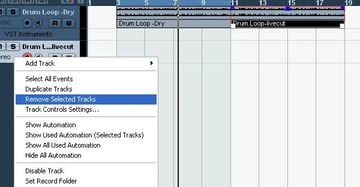 At this point we should remember that Livecut is still applied as an insert effect on our remaining track. We don't want to have Livecut applied to the track anymore, so click the channel's edit button and remove Livecut from the insert effect slot by clicking the "No Effect" option.

We are going to start cutting the audio up with the Scissors tool next, but first we make sure snap is turned on (the blue button above and slightly to the right of bar 19 in the picture below). To the right of that, you can see the option to snap to the current quantize value ("Use Quantize"), or other values via the drop down menu.

We will stick with the 16th setting in case we need to cut to the nearest 16th beat. With snap turned on, we'll be able to make accurate cuts.

After listening through the Livecut-effected audio (bars 11 to 19), I found that there were parts I liked and parts I didn't. Using the Scissors tool, I divided the loop up.

I then used the Eraser tool to delete the parts that I didn't like. I also used the scissors to cut the dry loop into sections, so I can chose some parts from the dry loop to paste into the Livecut loop. What I'm doing here is mixing and matching and re-arranging parts by cutting and pasting to create variations and fills.

Copy the parts and drag them around (you can create a new copy and place it all in one swoop by holding Alt/Option, clicking and dragging), re-arranging them in an order that sounds good to you. 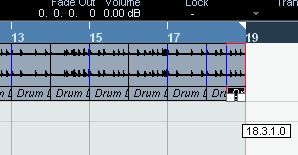 Then from the audio menu, select Reverse. 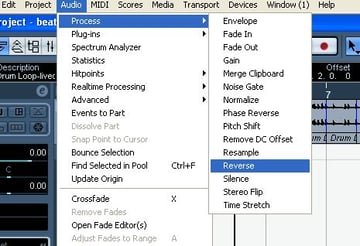 In the following window, make sure to select New Version so that the reverse is only applied to the selected slice. 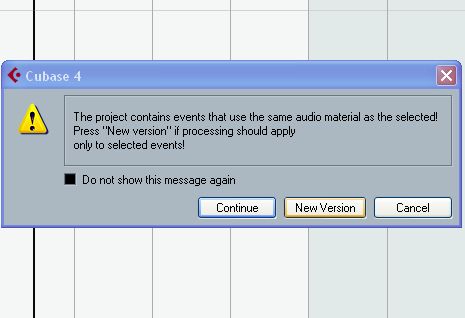 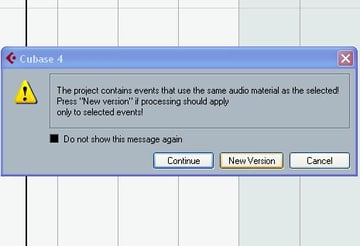 As a finishing touch, there are a couple of effects that I like to use to add a bit of warmth and texture to drum tracks. Add them both as insert effects on the drum track as we did before with Livecut.

The first is the Minion VST filter. You can see that I have set the Wet/Dry mix to around 50% for a more subtle effect, and the cycle value to 8, and I've left the default patch of "Mini One" in place as it is my favorite. 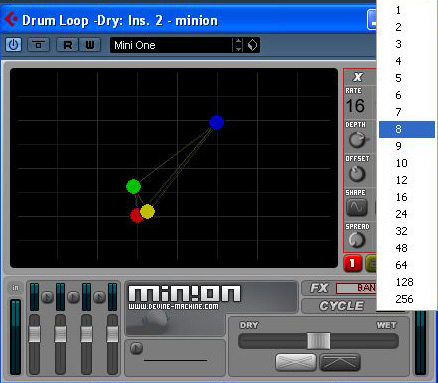 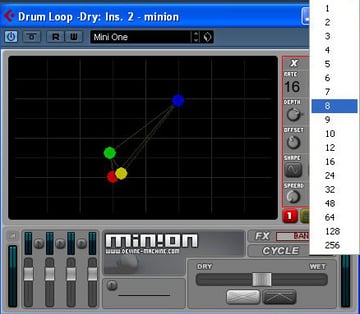 The second effect I use is the Analogic Delay VST tape delay effect.You can see that I have again stuck with the default patch "Basic" and also reduced the mix level down to 6.5, as I only want a very subtle amount of delay to add texture to the sound.

I hope the techniques described have given you some inspiration. Happy Livecutting!

CompositionCubaseLiveCut
Did you find this post useful?
Yes No
Would you like to provide feedback (optional)?
Cancel Submit
Want a weekly email summary?
Subscribe below and we’ll send you a weekly email summary of all new Music & Audio tutorials. Never miss out on learning about the next big thing.
Sign up

Andy Slatter
Andy Slatter is a self taught musician with over 25 years experience, he has trained in the composition and production of music for the media, he has a diverse and eclectic portfolio of stock music at AudioJungle, where he is also an audio reviewer.
Looking for something to help kick start your next project?
Envato Market has a range of items for sale to help get you started.