The biggest and most difficult sound to get right in the studio is usually the drum kit. There are many factors involved — the kit is made up by an assortment of instruments, usually with individual mics on every drum, and then room mics on top of that. This makes for a difficult job and usually the part of the tracking process that consumes the most time. Especially in home studios where the acoustics and mic selection don't really cut it, additional processing is required to improve the sound. Let's take a look at improving the kick sound with sine waves.

People spend ages pondering how to get that kick drum sound. They want the big fat boom that they can hear on records,
but can't recreate it themselves. And not for lack of trying. I have a trick that can help you make your kick drum all that much fatter,
resulting in a sound you can use for tight, throbbing pile driving rock or for fat hip hop beats. I'll be using Logic Pro 8 in this tutorial but any decent DAW will produce the same results.

When you have your kick drum recorded and you've spent hours trying to squeeze out a fatness that isn't there, maybe you can use artificial tricks to enhance the kick drum sound. Enhancing the low end by adding a sine wave generated by your DAW's oscillator is a great way to add thump and boom to your bass drum track, whether it be rock, hip-hop or whatever genre you choose to make.

A sine wave is the most simple sound wave you can find, representing only the fundamental frequency you choose — in this example, 50 Hz. It doesn't include any harmonics, unlike the square or sawtooth waves. So by adding a sine wave to the kick drum we will only be adding one tone, and not a musical element or characteristic.

Step 1 - Get your original kick in good shape

You have your kick drum track EQed, gated and compressed however you like it. Get your kick sound the best it can be before following the rest of this tutorial, because the sine wave is only going to enhance the bottom, and is not a character in itself.

I gated mine to get rid of the snare sound bleed and most of the hi-hats. I compressed it moderately (for rock) and EQed to enhance the click and cut out the boxiness. I also filtered it quite high because I thought it sounded better when I added the sine wave later on. Always think of the sound as a whole, not two sound sources that sound great individually but clash when they are together. 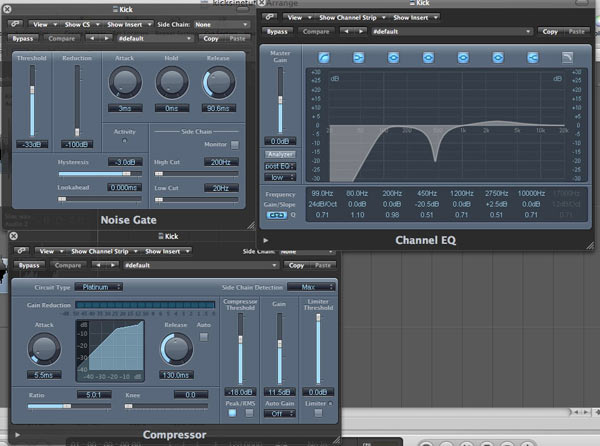 Listen to the dry kick here.

Step 2 - Make a new track for the sine wave

Add another track below the kick drum. Name it "Sinewave for kick." We won't actually be putting any audio into that track, but rather putting a test oscillator on the inserts. 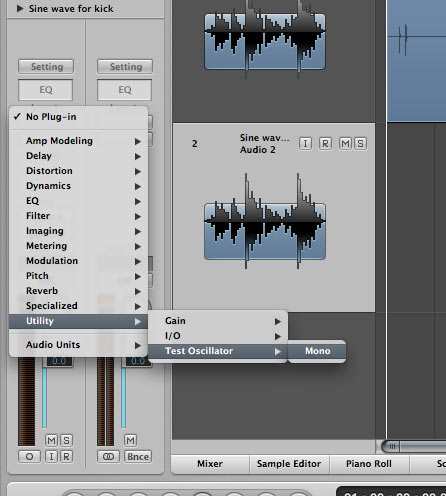 Next step is to make a 50 Hz sine wave continuously oscillate on the track. On the Test Oscillator there are many functions, different types of sound waves and noise you can generate to calibrate your equipment for example. We will be choosing the sine wave, which is the simplest of all sound-waves. As I said before, the sine wave will only be generating a pure tone devoid of harmonics which is great for this example as we don't want anything complex to jumble up our bass drum sound. 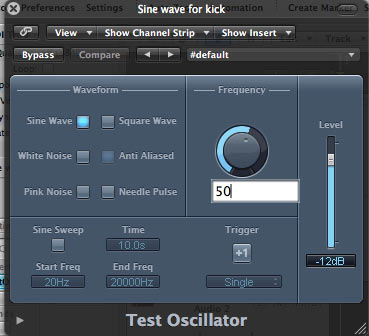 This is what a 50 Hz sine wave should sound like:

When you're done listening to the deafening hum of a 50 Hz wave and are getting quite tired of it, put a gate on it. Put the gate after the oscillator and put the threshold on -9 dB to make the gate mute the track. The noise gate is in Dynamics > Noise Gate > Mono on the insert sends. We'll make more adjustments on the gate later. 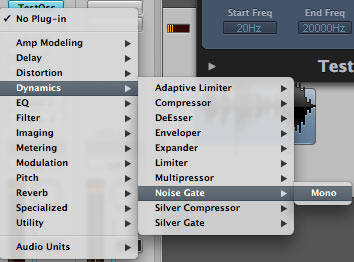 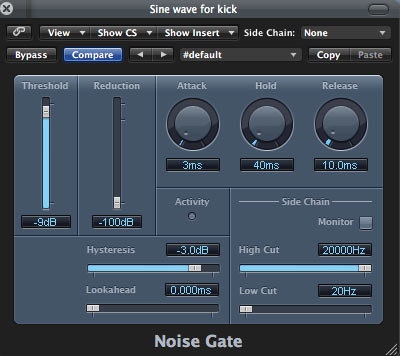 Step 5 - Side-chain the gate to the kick

Now the noise gate should have completely muted the sine wave. Next step is to side-chain the gate to the kick drum so it opens every time the kick drum plays. Side-chaining is incredibly useful for a lot of applications, making rhythmic parts, cleaning up badly played bass parts and much more. 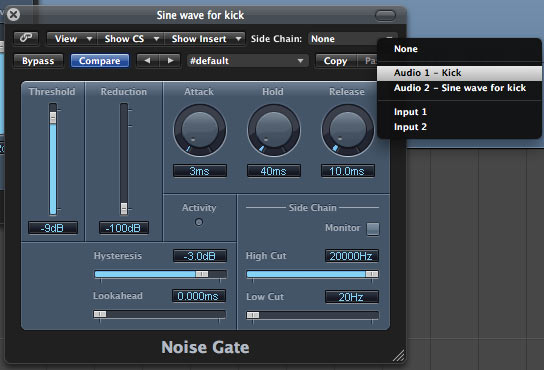 Now the only thing left to do is to adjust the threshold and the release so it plays in sync with the kick drum and realistically decays with each hit. I just lowered the threshold until it played in time with the bass drum and then fiddled with the release until it breathed with the drummer's playing. I tried putting the attack down to zero but that resulted in an undesirable click, so you can also play around with the attack for accentuation. 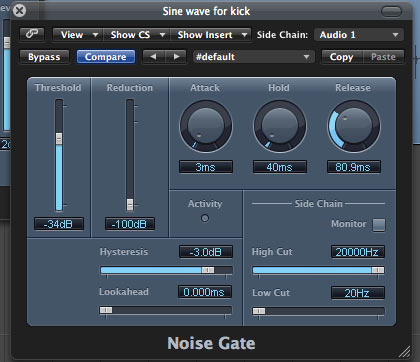 And that's it. Now you should have a pretty powerful, thumping kick drum that has all the characteristics of a normal acoustic bass drum but with the added low end supplied with the generated sine wave.

This last audio example shows you how this works in context with other instruments.

If you have any extra ideas or similar applications, let me know in the comments.