How to Make Simple Events with FMOD Designer

FMOD Ex is one of several audio middleware systems that are used in modern game development. It is integrated alongside an existing game engine technology (such as Unreal or Gamebryo) to add or extend audio playback functionality. One of the primary benefits of using a technology such as FMOD is that it shifts much of the systems design and implementation into the hands of the sound designer, rather than relegating it to a programmer, who may or may not be as well versed in audio.

In our last tutorial, we looked at a simple means of creating raygun or laser sounds. In this tutorial, I will introduce you to the FMOD Designer tool, as well as some basic concepts used in modern game development. Thumbnail image by skipthefrogman.

NOTE: A full introduction to the use of FMOD Designer is beyond the scope of this tutorial. For our purposes, we will assume that you have at least some familiarity with the program or have read the User Guide enough to understand the basic navigation and concepts.

The first thing I’ve done with our raygun sound is to separate the three ‘bursts’ from the original final mix. Each of these is trimmed neatly so the attack is immediate, and each file is reduced to mono. Here's what the files sound like:

Game Development Tip: While there are exceptions, in most game audio situations where sounds are going to be placed in three-dimensional space, working with a mono audio file is preferred. The pan information in a stereo audio file is not necessary (and sometimes can have unpredictable results) because the location of the sound will be determined by its position in the game world, relative to the ‘listener’, which could be the player’s avatar, the camera, etc.

Now that we have three individual variations of the raygun sound, we’re going to create a new FMOD Project and Event that will randomly play one of the three sounds. 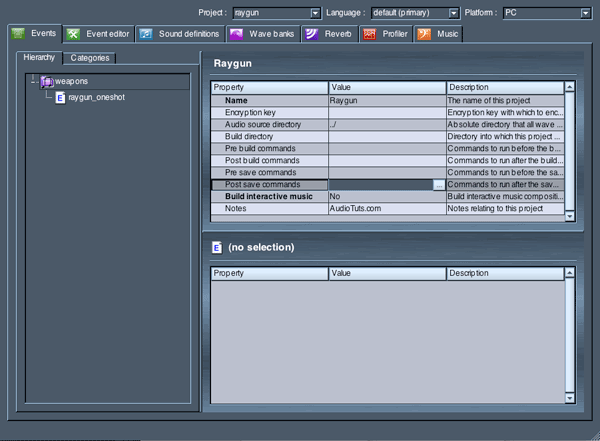 We’ll configure our Event Properties next. Most of the defaults will be adequate, but let’s make some changes that will make our raygun event more approprate for use in a game scenario. 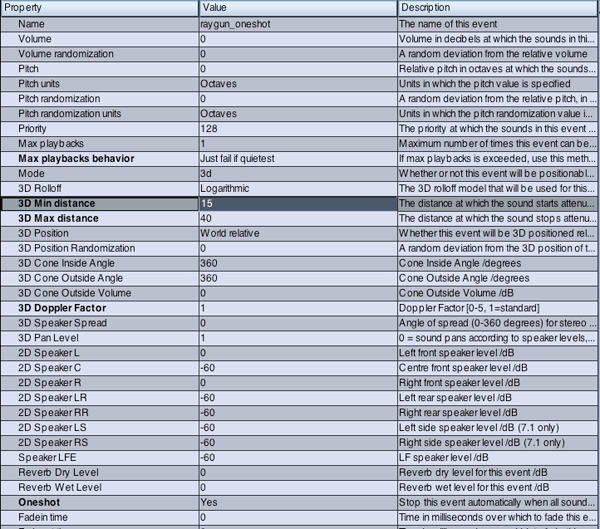 Next, we’ll create a wavebank in which we’ll place our raygun sounds.

The properties for an FMOD Wave Bank (also known as an FSB) will vary greatly depending on a number of factors specific to your game.

As an example, however, I’ll set this wavebank to load into memory (this keeps the sounds active and availble for immediate use in game), set compression to ADPCM (offers a good balance of sound quality, compressed file size and low CPU utilization), disable Syncpoints and set Max Streams to 0, since we wont be streaming any of our raygun sounds from a disk.

Game Development Tip: Wave Banks will vary greatly depending on your target platform (Windows, Xbox 360, Wii, Playstation 3, etc.), the type of sounds in the bank, how the sounds are used in the game, and how your game engine uses audio resources. While further discussion of these topics is outside the scope of this tutorial, no doubt you’ll continue to learn about them as you work in game development.

Now that we have a Wave Bank, we’ll add our raygun sounds to the bank.

The final step in making our raygun event is to add the sound definition to the event. 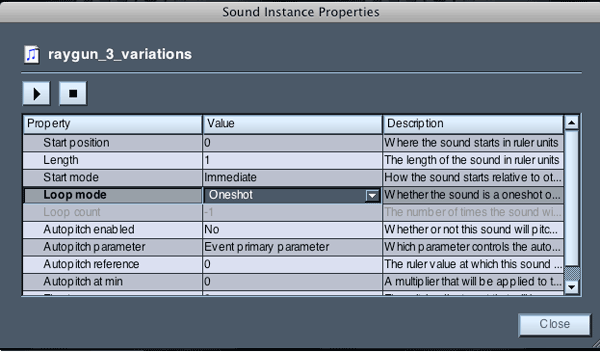 Our raygun event is now complete, and once the project is ‘built’, it will be ready to use in an actual game!

If you’ve enjoyed learning a bit about game audio design, please let us know in the comments. We are considering more tutorials along these lines, but we need to know if you find them valuable. We appreciate your feedback!

Sound DesignFMOD Designer
Did you find this post useful?
Yes No
Would you like to provide feedback (optional)?
Cancel Submit
Want a weekly email summary?
Subscribe below and we’ll send you a weekly email summary of all new Music & Audio tutorials. Never miss out on learning about the next big thing.
Sign up