Are you getting tired of using the same old chord progressions in your compositions? An excellent way to spice up your creations would be to familiarize yourself with the concept of modal interchange, also known as modal mixture.

To put it simple, modal interchange is the practice of temporarily borrowing chords from a parallel tonality/modality without abandoning the established key. This technique has been around for centuries and is well established in most genres, including rock, pop, jazz and classical music.

Chances are pretty good that you’ve already been using some form of modal interchange, without even realizing it. The Natural Minor key for example, inherently relies on modal interchange to create a strong dominant cadence.

A Little Knowledge is a Dangerous Thing

Before we dive into the topic of modal interchange, I would like to bring up a few points about the age old fear among some musicians that too much theory will somehow make them less creative. Having written this article, I disagree with such an attitude.

In the best of worlds all music would simply write itself. The composer would be able to hear a complete composition with melody, harmonies and chord progression in his head and his only job would be to write it down on paper or record it. Although this might be true for some lucky individuals, such as Mozart, most of us rarely get to experience this.

More often than not, we tend to get stuck or run into problems when composing. This is when having a solid foundation in music theory really comes in handy. It will take much of the guesswork out of the equation and allow you to keep on composing, even when you don’t have that cosmic connection and things are just “pouring out of you”. More theoretical knowledge will equal more possible solutions and ways to be creative. Being able to keep on writing no matter what is an invaluable skill for the professional composer.

I especially want to make this clear, because the terms relative and parallel tonality have contrasting meanings in different parts of the world. When referring to parallel, I mean tonalities/modalities of any given quality that share the same root. Relative tonalities would share the same set of notes, but with each tonality gravitating towards a different root.

The most common way to embellish a major key is to borrow chords from some kind of parallel minor. Listen to the two similar chord progressions in G Major written out below.

The first progression uses only diatonic chords, meaning that all chords are derived from one scale. In this case it happens to be the G Major(Ionian) scale. There is nothing wrong with these chords. A good melody, chord inversions and orchestration could make it part of a great tune. At a harmonic level however, it is fairly boring and will tend to sound a little too predictable.

The second example is identical to the first, with the exception of a C-7(IV-7) replacing Cmaj7(IVmaj7) in bar three. This chord does not change the overall key of the chord progression, but it does bring a change of character and added interest to the third bar. I believe that this type of change, as subtle as it may seem, will get noticed at some level even by the most casual non-musician listener.

So where in the world did that IV-7 chord in bar three come from? Given that we don’t have a melody to take into consideration, we only need to worry about the chord tones of C-7 that are foreign to the key we are in.

Bb and Eb of C-7 are not part of G Major and this reveals that the modal interchange chord must have been borrowed from some kind of parallel G scale with a b3 and a b6 scale degree. Below is a diagram of the parallel functions of all 7 modes of the major scale.

This is an excellent place to start looking for a source to our IV-7 chord. From this list we can find three different theoretical sources that contain a IV-7 chord. Parallel Phrygian, Aeolian and Lokrian all end up with a IV-7 chord when harmonized in thirds.

So how do you chose your source scale and why does it matter? Ultimately this is a personal creative choice, but common practice is to chose the parallel scale that has the greatest number of common tones with the established key. Let’s write out the three choices and examine how many notes they have in common with G Major (Ionian). 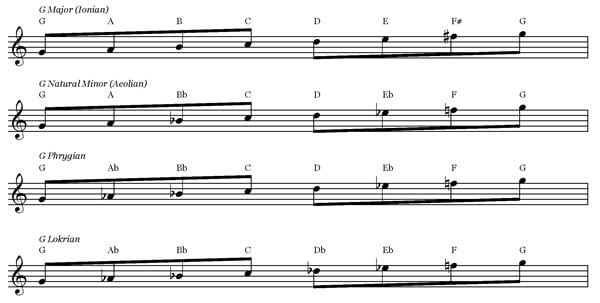 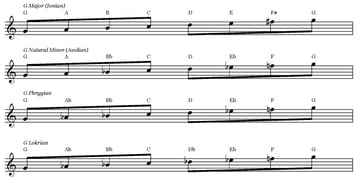 Natural Minor (Aeolian) has four notes in common, Phrygian has three, and Lokrian only has two. Our first choice would therefore be Natural Minor, but all three are theoretically possible and would affect the chord scale and available tensions for the IV-7 chord. If we stick to G Natural Minor as our source this will equal a C Dorian chord scale with tensions 9, 11 and 13 available over the IV-7.

Some General Guidelines When Exploring Modal Interchange On Your Own

This wraps up part one of my series on modal interchange. Until next time, try experimenting with the chords from the diagram of the 7 harmonized modes. This is an extensive list that will give you plenty of options for creating new and interesting colors when composing.

Keep in mind that modal interchange chords can be used in different ways. They can replace their diatonic counterpart, harmonize non-diatonic melodies, act as pivot chords for modulation, or serve as a link between two diatonic chords.

Music Theory
Did you find this post useful?
Yes No
Would you like to provide feedback (optional)?
Cancel Submit
Want a weekly email summary?
Subscribe below and we’ll send you a weekly email summary of all new Music & Audio tutorials. Never miss out on learning about the next big thing.
Sign up

Pär Svensson
Pär Svensson is a recent graduate from Berklee College of Music and works as a freelance musician in the Boston Area.
Looking for something to help kick start your next project?
Envato Market has a range of items for sale to help get you started.