The usage of simple, common time (4/4 time signature, where there are four beats to a measure, and each quarter note gets one beat) is pervasive in Western popular music, including rock, blues, country, folk, pop, and various forms of electronic music including many sub-genres of house and trance music. The four-on-the-floor mindset can be difficult to escape, but every musician and composer can benefit from a study of rhythm that includes a wider variety of time signatures and rhythms.

This tutorial assumes that you have some background in music theory - at the very least an understanding of a time signature, and basic rhythmic notation. However, if those concepts are foreign to you, you can still benefit from this tutorial. In the end, rhythm is as much about 'feel' as it is strict notation and classification.

What Is a Polyrhythm?

In its simplest terms, a polyrhythm is simply two more independent rhythms playing at the same time. Polyrhythms can be heard throughout African, Indian, and Afro-Cuban music, among many other musical cultures. As noted in the Wikipedia article on Polyrhythm, a simple example would be, "Three evenly-spaced notes against two, with the 3-beat pattern being faster than the 2-beat pattern, so that they both take the same amount of time." 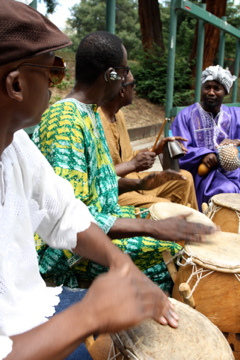 To better understand the concept of polyrhythms, let's look first at a simple rhythm in common time. Below is an example of a simple rhythm in common time, or 4/4 time. The time signature indicates that there are 4 beats to a measure, and each quarter note gets one beat. In the first measure, we have two parts playing four quarter notes, and in the second measure we have one part playing quarter notes and one playing eighth notes. Note that both parts are still effectively playing the same rhythm and meter.

In the next example, we have a simple 3/2 polyrhyhtm - where we play two notes against three over the same length of time. The result is two distinct rhythms that, when played together, create something more interesting and complex as a result. I've hard panned the two rhythms to better allow you to distinguish the individual rhythms.

While the above example may not seem overly complex, polyrhythms can grow increasingly complex as you add more beats. Adding one beat to each of the above, we get a 4/3 polyrhythm.

If you're confused, or find using the musical notation difficult, there's an easier way to visualize polyrhythms without using your DAW or notation: graph paper!

In order to better understand the mathematical interplay between rhythms within a polyrhythm, it is often helpful to use graph paper. If you don't have ready access to graph paper, there are two other helpful options: a computer spreadsheet program, or your DAW's 'Piano Roll' editor.

In our next example, we have our 4/3 polyrhythm laid out. Twelve beats per cycle, and two independent lines - one rhythm of four over one rhythm of three.

When we're working our DAW, the process is very similar. We set the grid resolution to be equal to (or a multiple of) the length of one complete cycle. In the case of the 3/2 polyrhythm, I used a grid resolution of twelve, then used the Pencil tool to draw in the rhythm like so:

3/2 polyrhythm in the Piano Roll Editor of Logic.

And here's the 4/3 polyrhythm:

4/3 polyrhythm in the Piano Roll Editor of Logic.

Using Polyrhythms In Your Music

Now that we have a basic understanding of what a polyrhythm is, how to map out the rhythm, and how to create it using our Piano Roll editor, let's explore how we might use polyrhythms in our music.

It is easy to envision using polyrhythms for the rhythmic components of our compositions: percussion, drumkits, etc. However, I really enjoy working with polyrhythm where rhythm meets melody and harmony. Let's take a brief look at two examples.

Composer Ryan Leach previously gave us a great tutorial on using ostinato phrases in our compositions. Conveniently, using a 3/2 polyrhythm is a great way to create an ostinato phrase with an interesting rhythm. Below is an example of a 3/2 polyrhythm, used in the lead ostinato line, supported by a downsampled rhythm and simple droning bassline.

Another simple use of polyrhythm is in adding interest and complexity to your basslines. In the example below, I've added a pizzicato bassline to the previous example, layering a 4/3 polyrhythm over the existing 3/2 polyrhythm. The result is an even more rhythmically interesting presentation.

I hope you've enjoyed learning a bit about polyrhythms and that you'll take the opportunity to begin exploring them in your own music. In this tutorial we barely scratched the surface of polyrhythms, so I encourage you to learn more about them - reading and listening, performing and recording. There are a host of great learning resources online including theory, music and video examples. To listen to some more examples of polyrhythms, check out this excellent site for "Bounce Metronome".

In conclusion, I'll leave with a YouTube example of polyrhythm from a Japanese Pop group called Perfume. Their tune 'Polyrhythm' has an amazing polyrhythmic bridge (starting at 1:37) that might spark further interest and discussion.

GeneralComposition
Did you find this post useful?
Yes No
Would you like to provide feedback (optional)?
Cancel Submit
Want a weekly email summary?
Subscribe below and we’ll send you a weekly email summary of all new Music & Audio tutorials. Never miss out on learning about the next big thing.
Sign up