In this tutorial I'm going to show you how to loop Track Automation in Logic Pro without having to physically copy it. This technique can be a real time saver as re-editing your copied Automation data for a loop means you have to re-copy the parts again! Not any more folks!!!

A while ago Ryan Leach wrote an article called Spice up your Loops by Automating EQ. There were a couple of comments asking if there was a way to loop the automation. I left a comment promising a solution in the form of a tutorial. Well, it's a bit late but here it is!

There are a couple of ways to do this depending on how you input the automation so I'll cover both. I'll also explain what's going on with this and why conventional techniques like coping and repeating regions aren't always the shortcut you thought they'd be!

Setting Up the Loop

I've recorded in a quick two bar guitar loop for this demonstration. I've turned on loop (L) for the region. This will just loop the part infinitely untill the end of the song set by the project bar length.

Turn on Track Automation by pressing (A). You will see the default Volume track.

I recorded this using Guitar Rig 4. For the purposes of this tutorial I'm going to add a simple Wah Wah effect to the recorded part as it's a typical effect you might want to loop.

I've chosen the value 'P050' in the drop down box that assigns your Automation parameters. This is 'Host Automation ID: 50' for GR4.

Using the mouse simply draw in the automation nodes you want. Do this with the Loop mode 'On' and your locators at the length of your region.

The Problem with Copying and Repeat

You could just grab the region and move it holding 'Option' to manually copy the region.

Depending on your Track Automation preferences you can display a message that asks if you want to copy the automation data.

Pressing 'Copy' will copy the region and any automation inside the region boundaries.

This is fine, but what happens when you need to fill 200 bars! Unless you have lots of free time, coffee and an appointment at the osteopath booked you'll need another solution!

So I'll use Repeat Regions! If you want to copy 100 regions that's great! Select the region and press 'Command + R'. You'll get a dialog box, put in the number of copies. Bingo!

Logic will ask if you want to copy the Automation. Say yes!

Now you have all your regions with the automation copied. Amazing! (P.S. This doesn't work in Logic 8 and below!)

So now I have a question. What happens if you want to tweak the automation for those copies? And I mean all of them!

Your going to have to delete them all and start again! Every time you want to tweak them! Not Good. So here's my solution! Embed the automation inside the region!

This is the technique if your drawing in the automation data by hand for the region you want to loop, like the above example.

Select the region you drew the automation on top of. Go to Track -> Track Automation -> Move Visible Track Automation to Region. You can also press 'Control + Command + Down Arrow'. This moves the currently selected Automation Track inside the region! Yes, inside an audio region!

You should notice that the drop down where you assigned the automation parameter now says 'Display Off'. This is because the automation is no longer on the track, it's inside the region! You still need to enable 'Read' for the automation mode but I'll explain this later.

You can still edit the nodes (there are some display bugs in this but nothing serious) and add curves using your automation tools!

When you enable 'Loop' on the region the automation goes with it! Any changes made in the region are reflected straight away in your loops! No copy or repeat in sight! Pretty cool eh!

You can do the same thing with as many tracks of automation as you like. The only difference is how you edit the data. Let's have a look. 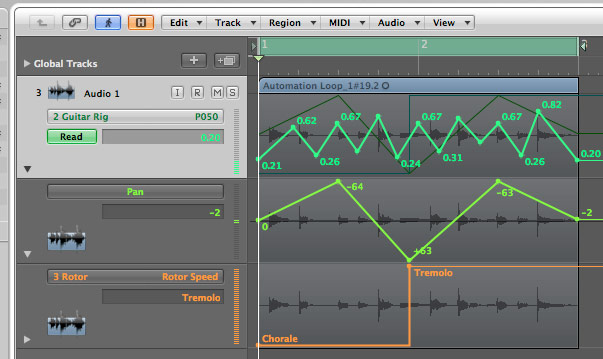 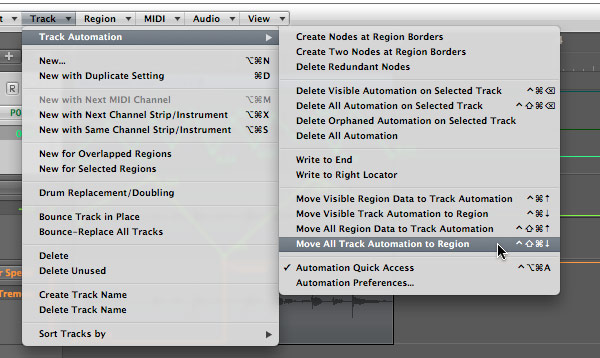 You will see that the automation is now removed from the tracks and is now inside the region.

There are a few things to bear in mind here. First, you only get the first parameter in the region view. I haven't found a way to switch that. Secondly, although the tracks for Pan and Rotor Speed look like they have nothing in them the current value is being displayed and will animate when you hit play.

When dealing with multiple automation tracks there is a slightly different workaround to editing them. You basically have to move the data out of the region and back onto the tracks. You do this by either selecting 'Move All Region Data to Track Automation' or press 'Shift + Control + Command + Up Arrow'. 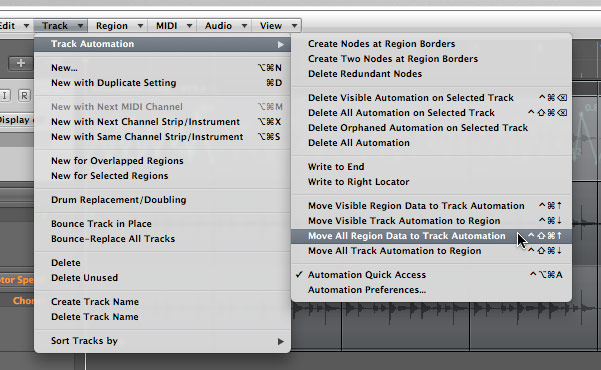 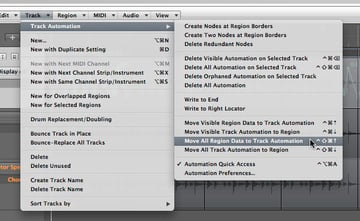 The first parameter will still have the 'Display off' enabled which is annoying but you can just reselect it. At least Logic displays it in the drop down as a shortcut.

Simply reedit the automation and then move it back inside the region (go to Step 1) for looping. 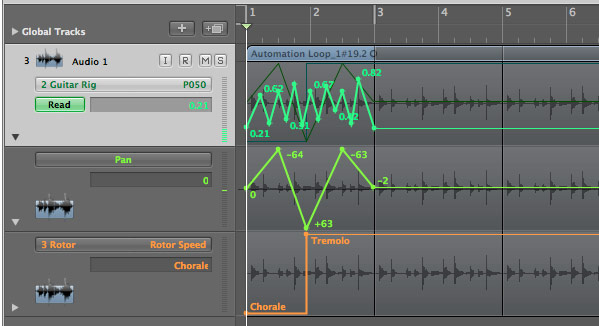 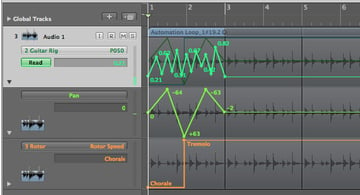 Like a lot of things in Logic there is always a different approach to be had. Here's another way you can loop automation. It's the same as the first approach but this time the data is embedded into a MIDI region on the audio track! I know, MIDI on audio tracks, whatever next! 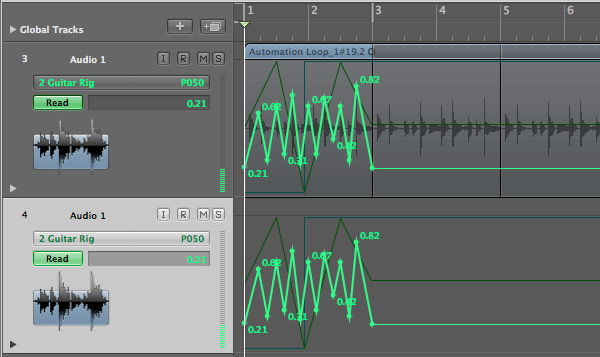 Using the Pencil Tool draw an empty region onto the bottom track and lengthen it to two bars. This is a MIDI region. It doesn't matter that it's on an audio track Logic can handle this. 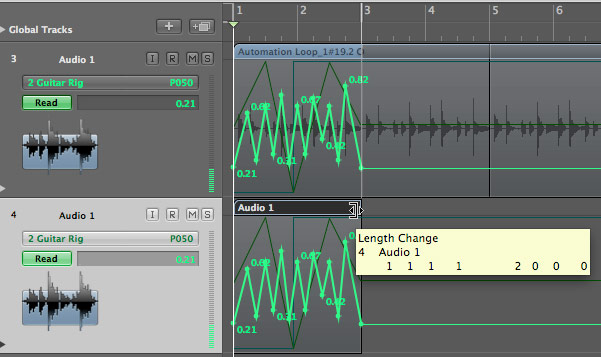 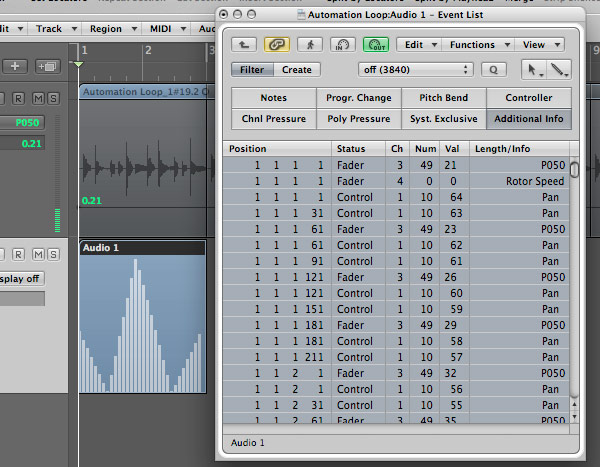 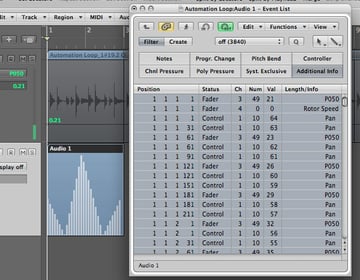 Now you can loop the MIDI region for that part. The thing about doing it this way is the automation is now independent from the audio region and can be offset or chopped up. 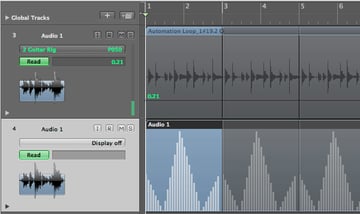 You can obviously use this technique to your advantage by looping just the Wah Wah data over an entire live take. You can literally create custom MIDI LFO's for any parameter you please. I'm sure you've got some ideas by now!

Looping From a Performance

Conversely you can extract loops from Automation that you would consider to be 'performed' and not drawn in by hand. This can produce more organic results and allows you to pick the best bits of the automation effect.

I've played in some Wah Wah over the loop using the Modulation wheel via 'Quick Automation Access' if you don't know what that is you can find a tutorial for that here.

To extract the part I like I just un-loop the part (L), copy (or move) it to the right place and hit 'Control + Command + Down Arrow' to embed it.

The rest of the automation is discarded and now I loop that part. Easy! 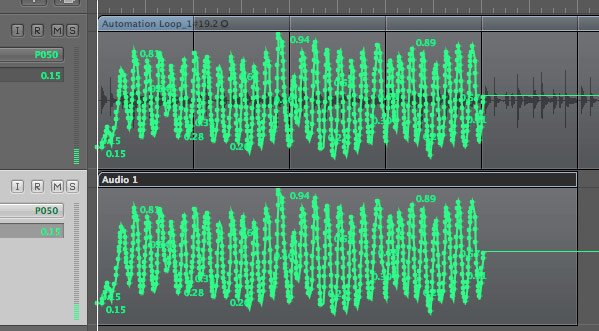 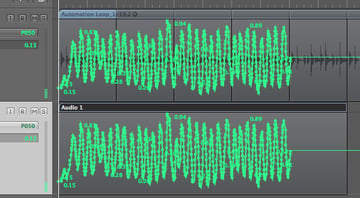 Now just cut out the bars you want! Easy!

How Does This All Work?

Well it works because automation in Logic is just MIDI! Audio tracks can transmit and receive MIDI in the 'Environment'. A track is assigned to an Environment Object using the 'Reassign Track' menu. The regions are essentially independent entities and can be reassigned to any track you choose in this way. The only rule is audio regions don't work on MIDI tracks. You can however route any MIDI track to an audio track to control it's plugin parameters.

If this is confusing try this tutorial on the Environment. Once understood, Logic becomes very powerful indeed.

The Automation view in Logic is no more than an easy to use interface for MIDI controller data. It's a bit like Hyperdraw! Below you can see the automation being transmitted out of the track object. The values are the automation data being fed from the track to the object. Here's what they mean.

It really doesn't matter where this data is, be it inside a track region or on the automation track itself. The data is always MIDI based and fed to the object regardless from the track!

Limitations! That doesn't sound good does it. Well no it doesn't. Now I'm a big Logic fan but it has one major bug bear for me when it comes to automation, and that's Resolution.

Ever tried to input a value for Volume data on an automation track and had the value snap to something else not quite what you want? Well the sad fact is as soon as you draw an automation node in Logic the range of your automation parameter values are quantized to 128 steps! For everything!

This leads to a number of problems, one major one being 'Stepping' on some plugin parameters. If you don't believe me here's an example of Logic's Phaser plugin having it's 'Sweep Floor' parameter automated with a linear transition over three bars from top to bottom.

Now that's a pretty extreme example but it's going to suck if you want to create a custom LFO for your Phaser plugin parameter using automation!

So why is this? Well as far as I can make out (and there's not a lot of documentation on this subject!) any automation inputted via the arrange page is transmitted to the plugin as a 'MIDI' Fader message which is only three Bytes of data. The last byte being the parameter value which only has a resolution of 128 steps!

On the other hand if you have a Mackie Control surface you actually get 1024 steps as the controllers faders output at 10bit resolution not 8bit like MIDI. Saying that, as soon as you edit the automation data via you mouse your back to 128 steps! Doh!

You'd think that Apple would have implemented this higher internal (10bit) resolution for automation tracks when drawing and editing. This has been a major sore point in the Logic community for a while and has yet to materialize. It's not all bad though as this will only effect parameters with huge ranges e.g. 20hz - 20khz, but still pretty poor for such a 'Pro' app!

Well I hope this has helped out and given you some creative thoughts. Try it out for yourselves. Any questions, leave a comment! Till next time!