While FL Studio's native convolution plugin is usually used for reverb, it can also be used to create interesting delay effects quickly and intuitively. With a short impulse sound and some step sequencing, you can have a custom delay line in a few minutes, even adding crazy reverb to it as well.

First of all, a multitap delay is a delay effect that allows you to control the level, panning, etc. of each 'echo', whereas a normal delay uses a single 'tap' and feedback. In the latter, each repeat is quieter than the last, and may be panned to a slightly different place, but with a multitap delay, anything goes. This is useful because it might sound neat.

We'll start by making a single-sample click sound to throw around. This click will make the 'echoes' in the impulse response that will eventually be loaded into the Convolver. In FL Studio, open the browser and find the 'Impulses' folder. Inside this folder, there should be another folder named 'Special' and two audio files inside. Right-click the file named 'IMP Centered (short)' and open it in Edison by selecting 'Edit in audio editor' from the menu that appears.

In Edison, make sure you are in the waveform display mode, not the spectrum mode. Press 'S' to toggle between the two. This audio file will be just a single click. Zoom in to the click until you can see the individual samples, represented by small circles. Select the one sample with full amplitude and a few of the subsequent samples by clicking and dragging. Press Ctrl-Delete to trim the audio file (i.e. delete everything except the selection). Save your edited impulse in the same folder as the original, but with a different name.

Drag your new click sound from the browser into the step sequencer. Press F4 to go to an empty pattern. With the step sequencer, program the rhythm of the delay you would like. Use the 'Velocity' and 'Panning' pages of the graph editor to change the level and panning of each click. Remember: you don't need a click on the first step on the first beat, because that's where the initial 'dry' sound will be.

To make it even more interesting, let's add a filter to our little click. Open the Sampler channel that the click is loaded in and click the 'INS' tab. Choose whichever kind of filter you would like in the menu and set the cutoff frequency and resonance, keeping in mind that we're going to be automating the filter like we did with the velocity and panning. In the step sequencer again, use the 'Mod X' page in the graph editor to edit the cutoff frequency of the filter for each step and 'Mod Y' for the resonance. I'm going to use a highpass filter.

In order to hear our cool delay and not just a bunch of clicks, we'll have to record the clicks and put the recording into a Fruity Convolver in some mixer track. The Convolver plugin can record audio passing through it, but using Edison give us more control.

Make sure the project's tempo is set to what you actually want. Open the Edison plugin already on the master mixer track from our editing adventure and set it to record 'On Play' and 'In New Project'. Press the record button in Edison and hit play in FL Studio's transport section.

The pattern of clicks will loop, each recorded loop in Edison seperated by markers named 'Song jump'. Stop playing and recording when you're satisfied.

Now that you have your clicks recorded, double-click on one of the 'Song jump' markers to select only the audio inside that marker and the next. If the markers jump around unexpectedly, make sure the 'Snap' button at the bottom right of Edison is disabled. Press Ctrl-Delete to trim the audio.

If you would like to add some more variation to the delay, use the convolution reverb inside Edison itself to add reverb to the clicks. Press the Reverb button in Edison or press Ctrl-R to open the reverb setting window. Find a nice impulse response to use and adjust the settings, clicking 'Accept' when finished.

Note: you can edit the impulse response itself by selecting the waveform inside the window and using the normal Edison keyboard shortcuts to edit. 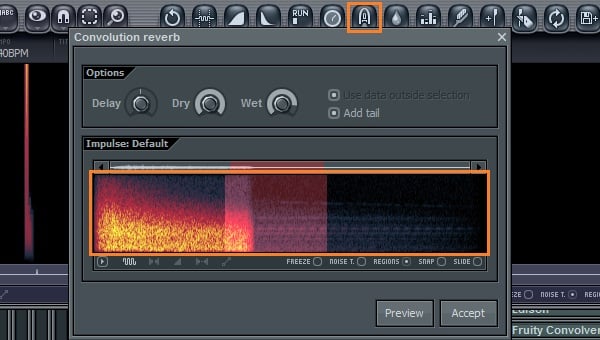 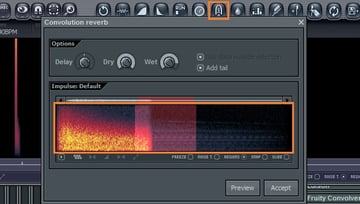 To adjust the level of reverb for individual clicks, draw a shape with the all-purpose envelope, accessed by clicing the last envelope icon at the bottom of Edison. We'll use the undo mix feature (in the next step) with this envelope to reduce the level of the reverb in some parts of our sound. The top of the envelope will be 100% dry, while the bottom will be completely wet.

Open the edit menu by clicking the scissors button and hover your cursor over 'Undo mix (envelope)'. In the next menu that appears, choose the item directly before the reverb. Now your reverb will be mixed in with the dry sound according to the envelope you drew earlier. When you're happy with it, select the entire sound by pressing Ctrl-A and copy it with Ctrl-C.

Open an instance of Fruity Convolver in a mixer track that has an instrument routed to it. In the top right of the Fruity Convolver plugin, click the button labeled 'KB Input' to enable keyboard shortcuts for the plugin. Press Ctrl-V to paste the previous sound into the convolver and press Ctrl-Delete to trim out the default impulse response. Play the instrument routed to this mixer track and see how it sounds.

Here's an example of a synth pad going through Fruity Convolver, with the wet mix level being automated up and down, and then a snare drum through the same.

Jeremiah Ott
Jeremiah Ott doesn't seem to ever sleep. He also knows a little much about FL Studio.
Looking for something to help kick start your next project?
Envato Market has a range of items for sale to help get you started.