Quick Tip: How To Mix A Kick Drum in Electronic Music

The kick is one of the most important parts of a song, yet it is notoriously difficult to mix. As producers our goal is to get the drum beat to shine clearly through the mix without overpowering everything else. Let’s learn how!

Take a second to listen to this unmixed kick:

Note that it sounds a bit sloppy and loose at the tail. The sound also deteriorates very fast, which we do not want. We are going to transform this into something much heavier and add emphasis so the sound is more full.

The first thing you’ll need to do is assign the kick to a new mixer channel and add a compressor. This will help add more punch to the kick and tighten up the low end.

Next, go ahead and adjust the attack. On a kick the attack should be quick so that the transient will still punch through and not be squashed by the compressor. Generally 30 to 60 ms is a good starting point. Experiment by putting attack down to 0 ms for a second and see how lifeless the kick becomes.

The ratio is how much compression will occur once the signal crosses the threshold. Light compression is from approximately 1:1 to 3:1, medium compression from 4:1 to 6:1, and anything over 10:1 is considered extreme. For now let’s set it at 3:1

A lot of people think that a louder kick is better but that’s not true. You want to listen to what the compressor is doing to your kick, not simply crank up the volume. If the kick is to be a focal point (like it is in most electronica) you want it to sit around -3 dB to -5 dB.

Remember that each kick is unique as well as the mix that it is part of. There are no magic rules when compressing, you simply want to tweak until you find what sounds best for your project.

Here is what our kick sounds like so far:

The next step is adding an EQ. Go ahead and add it to the kick and then cut all frequencies under 25 Hz as these low frequencies only serve to clutter the mix and are completely unnecessary. 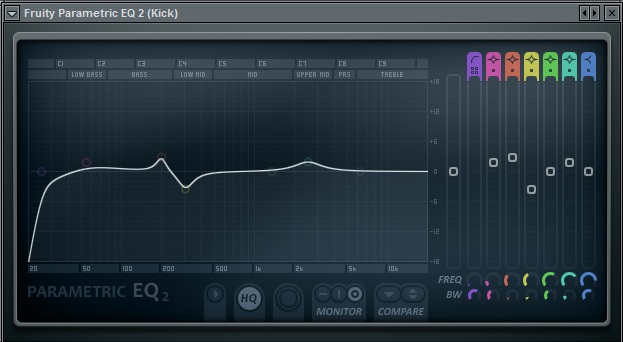 It’s important to remember that you only want to change settings by plus or minus 6 dB at the absolutely max and preferably only 2 to 3 dB changes. You want the sound to be natural and not come across as fake.

Now take a final listen to the kick and see how it has changed:

Mixing & MasteringFL Studio
Did you find this post useful?
Yes No
Would you like to provide feedback (optional)?
Cancel Submit
Want a weekly email summary?
Subscribe below and we’ll send you a weekly email summary of all new Music & Audio tutorials. Never miss out on learning about the next big thing.
Sign up

Morgan King
Morgan King is a Canadian composer and sound effects designer for visual multimedia. He has created audio for many different projects, ranging from XBLA games to animated shorts. He is a graduate of the Art Institute of Vancouver, and holds a diploma in Professional Recording Arts.
Looking for something to help kick start your next project?
Envato Market has a range of items for sale to help get you started.