In this tutorial I'll show you how to cover how to create Skrillex's famous synth sound from Scary Monsters and Nice Sprites. With a working synth patch you will easily be able to remix, edit, or even create your own tracks based around this sound.

I'll be using FL Studio's Sytrus for this tutorial, but any synthesizer that has FM synthesis capabilities should be able to follow along.

Here is an example of the final synth patch:

It's important to ensure that the sine wave does not actually change frequency. The reason for this is that, by having a static modulator, the amount of dissonance will vary as the pitch of the sawtooth changes.

This is what really makes the Scary Monsters sound so random and harsh.

In Sytrus I set the sine wave offset to 100.00Hz and bring the frequency ratio down to 0.000x. Other synths might use varying terminology but the end goal of a 100Hz is the same.

For those using a synth that cannot specify a certain frequency, there is a potential work around. Since the modulator is just a sine wave, you can also try to use a LFO set to 100Hz in place of the oscillator. However, this trick requires that:

You need a fairly flexible synth to pull off the above trick. More than likely if you synth can do that work around, it probably can set static frequencies. Reason's Thor, however, is a good example of needing this trick.

Step 2:  Setting up the Frequency Modulation

The beauty behind this sound is in its simplicity. Set the sine wave to modulate the sawtooth by about 5% and you should start to hear some nice dissonance.

If the dissonance is too much for the synth, dial back the amount, if it is not enough, crank more in. Here's what it should sound like at the moment...

Like many EDM lead sounds, there's a healthy dose of chorus and unison effect going on and Scary Monsters is no exception.

Begin with a second order unison effect that has the exact same pan, pitch and no variation essentially creating a duplicate signal. The only parameter you'll need with this unison effect is to offset the phase by about ten per-cent or so.

This so that there is just enough difference between the original and the unison to act almost as lowpass comb filter and take away some of the very high end. Your mix ratio should be 100/75 original/unison respectively. 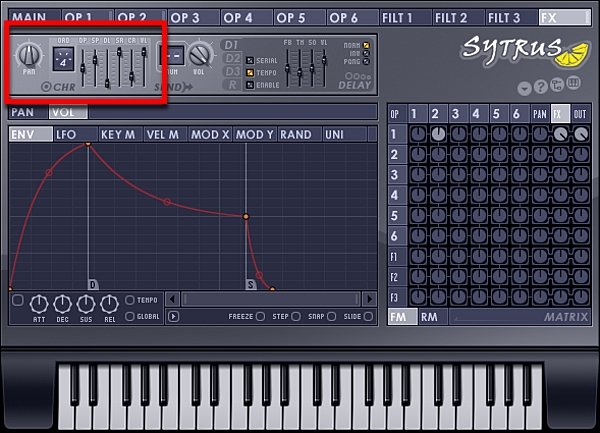 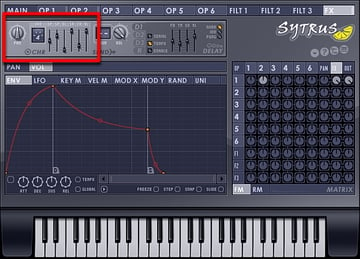 Add some chorusing to widen the sound, give it more motion, and make it less buzzy. For this, start with a fourth order chorus with a depth of about 50% and a stereo spread of 100%.

Ensure that there is no delay in the chorus and that the speed is about 75%. If you start to hear phasey notes you may need to adjust the chorus's cross point as well.

Mix that chorused version back in with both the original and the chorus at 100%.

While the sound is basically crafted, its still missing that nice short glide between the notes. The melody simply wouldn't be as catchy without it.

Activate the portamento/slide function in the synth and set the slide time to somewhere between four and six seconds.

For Sytrus users, you'll need to exit the synth itself and go into the Channel Settings.

In Channel Settings go to the MISC tab and under Polyphony you should see the Portamento activation and slide knob.

That about wraps up the Scary Monsters and Nice Sprites sound. All in all not too hard of a sound to create once you get the FM trick.

Some may have noticed that the sound may be a bit brighter than the final mixed one in the track. This is because the track was mixed to have a very thick wall of sound with drums that punch through.

In order to achieve this, everything but the drums was dulled a bit except the drums. Thankfully it is easy to play around with EQ's and Saturation plugins to get a similar effect when it comes time to mix.

I also recommend trying different waves other than the sawtooth. I find that using a Square or some derivative sounds very pleasing. It is real easy to make this sound your own.

Sound DesignSynthesis
Did you find this post useful?
Yes No
Would you like to provide feedback (optional)?
Cancel Submit
Want a weekly email summary?
Subscribe below and we’ll send you a weekly email summary of all new Music & Audio tutorials. Never miss out on learning about the next big thing.
Sign up

Mike Elliott
Having graduated with a bachelors and masters in audio and music, Mike is a well versed audio engineer, musician, and educator. From working with Grammy award winning engineers down to small start up studios, he has seen all sides of the industry, and what it takes to get the job done right. Make sure to stop by his blog Lean Audio, which covers the bare necessities and how to do audio on the cheap. From plugin reviews to heads up on free stuff, his goal is to save you time and money. Be sure to follow him on Facebook to stay up to date.
Looking for something to help kick start your next project?
Envato Market has a range of items for sale to help get you started.