Spice Up Your Loops by Automating EQ

Whether you're working on a tight scoring deadline or simply rushing to get your creative ideas out of your head and into a session, it can be very easy to drop a drum or percussion loop into your track and forget about it, causing the loop to be a static and repetitive element that drags down the overall interest of your music. You can very quickly and easily make your loops more interesting by automating an EQ insert, costing you little time but adding a nice touch of subtlety to your mix.

The first step is to insert an EQ on the track that you want to effect. If you're using Logic Pro I'd recommend the very simple and straightforward Channel EQ, but any EQ will work as long as it has a High Cut (aka Low Pass) Filter that you can automate. A High Cut/Low Pass Filter does just what it sounds like, it cuts out high frequencies and lets low frequencies pass. Where it begins to filter is set by Frequency, which is what we'll be automating. Depending on your sequencer of choice, it may be called frequency or cutoff (in the case of Logic, it's cutoff).

A note to Logic users: the High Cut is turned off by default in the Channel EQ, so make sure you open up the EQ and switch this feature on. It's the icon of a curved line in the upper right of the plugin. 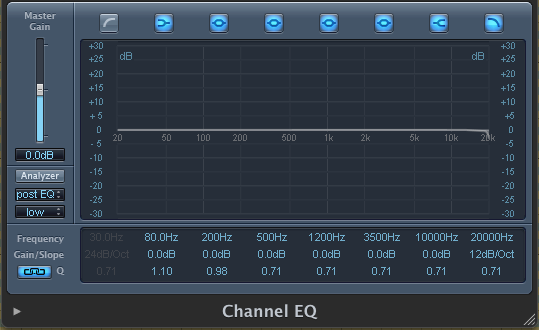 Next we need to select the parameter to automate. If you're not familiar with using automation in Logic, now might be a good time to pause and check out Joel Falconer's helpful tutorial on How to Automate Audio Tracks in Logic Pro 8 before moving on. On the track automation pulldown menu, choose Channel EQ: High Cut Frequency. 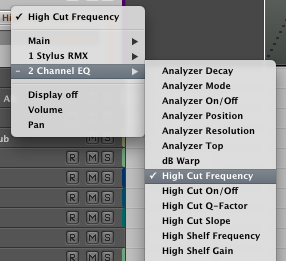 Let's start by automating EQ on a simple track, a basic hi-hat loop.

For this sound I want to give a feeling of rising and falling, creating a sense of dynamics to the loop that wasn't there before. I'll start the EQ around 650Hz, about as low a setting as we can get and still be able to hear at least some of the loop. Then over the next bar I'll add a node at the top (20kHz) to essentially be cutting no frequencies and allowing the loop to fully play through. Over the next bar I'll come back down, this time I consciously did not go as low as 650Hz because I want the loop to sound a little different in the middle than at the beginning and end. Up for one more bar, and finally fade away into near obscurity by EQing off almost every frequency. 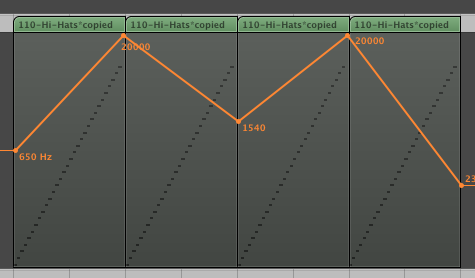 We can add a touch more interest to the rising and falling by curving our automation lines. A shortcut is to hover your mouse over the line you want to curve, hold Ctrl+Option (notice that your cursor changes), and drag the line in the direction you want it to curve.

The curve can give you even more control over how dramatic a change in frequency you have over a short period of time. In this example the EQ seems to rush up into the high setting and then slowly back off down again.

In this musical example, note how the automation gives the Hi-Hat loop more life and interest. Rather than a static ticking away in the background, the loop serves it's function of keeping a groove but doesn't bore us with monotony.

3. Automate EQ on a Drum Loop

These same principles can be applied to a much fuller drum loop as well.

This time rather than having a rising and falling line, I want the loop to start out "Lo-Fi", deep and murky and then rise up into a full beat. All we have to do is choose a low frequency for the first part and set the second part at full. You also need to decide if you want a sudden leap between sounds, or in this case I chose to have a quick fade up one beat before the second section.

I've also chosen to fade the loop out at the end. Pay attention to how using EQ as a fade technique gives a unique alternative to simply turning down the volume.

Because we music geeks can never leave well enough alone, let's add one more little touch to this loop by slowing down the tempo for that last bar. You'll need to set a tempo point at the beginning and end of the last bar, then in the Global Parameters Tempo view you can play with how drastic a tempo drop you want. I want a pretty exaggerated effect so I've taken the tempo down more than half (from 111bpm to 50bpm). Also notice that you can use the same curve technique we discussed in the previous section. 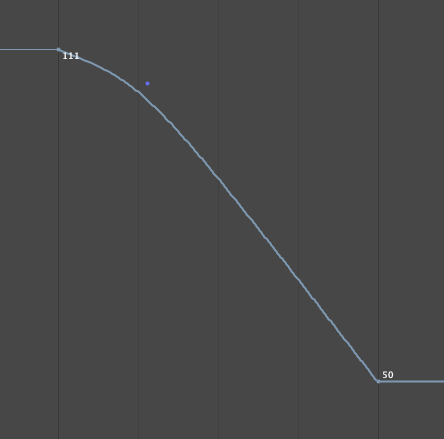 The decreasing tempo adds that little extra flavor to the already interesting sounding effect of a fading EQ.

In this example the technique was only used once, as a way to separate the introduction from the rest of the piece. The drum loop begins filtered and then opens up for the actual groove.

This technique takes hardly any time to implement but can add a lot of subtlety and interest to your music. The next time your drum loops are sounding repetitive or bland try automating the EQ and you'll be surprised how fresh it can make your tracks sound.