The Process of Score Composition, Part 1

The main point I'd like to get across before we dive in is that there are an infinite number of ways to compose, and an infinite number of ways to interpret what might be considered appropriate for a scene or film. Much of what we assume to be appropriate is simply cultural influence - consistent use of what has worked well in the past for a given film genre thus makes that style popular for that genre. There is no clear-cut right or wrong way to compose or score.

That said, many composers feel torn between by wanting to create something that is well received, but not wanting to fall prey to what is considered popular. As a result, they often find themselves frustrated when they're expected to (or are forced to) compose in a particular idiom. Even so, what sets a good composer apart from a great composer is this: A good composer is able to deliver a score that is appropriate for the medium and pleases those who need to be pleased. A great composer is someone who can do all of the above and still express his or her own unique voice through the music.

With this in mind, my intention with this series of tutorials is to walk you through the process of one of my compositions. It is intended to offer some new ideas and perspectives and hopefully give a bit of creative inspiration, but by no means should it be considered definitive - even for my own personal compositional process. 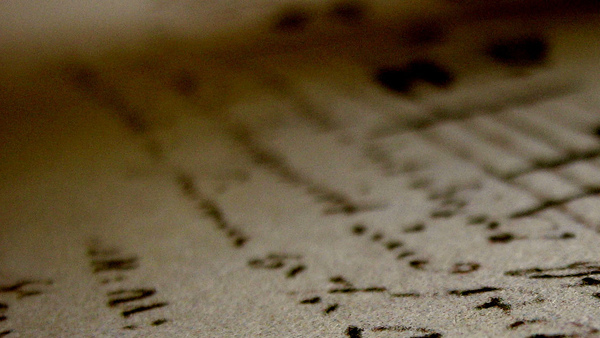 I respect the man who knows distinctly what he wishes. The greater part of all mischief in the world arises from the fact that men do not sufficiently understand their own aims. They have undertaken to build a tower, and spend no more labor on the foundation than would be necessary to erect a hut. - Johann Wolfgang von Goethe

When working on a film, television episode, or game, the first step is always to establish your foundation. There are many aspects to this process, but some of the most critical points are as follows: 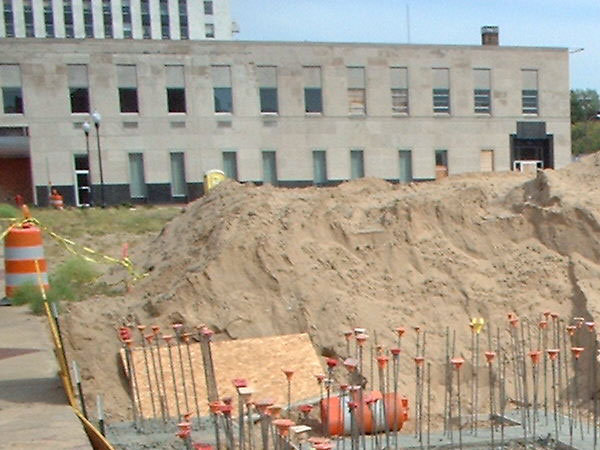 Moving forward in the composing process, let us say that all of your foundational layers have been set. You've established the genre or musical style. You've selected the base pallette for your instrumental arrangements. At this part of my process it is now time to start making some music! There's no time like the present to get into the studio (or with your instrument of choice) and begin recording some ideas. Perhaps you have, by now, written a couple of scratch themes that might work for the project, or perhaps you just have the basics of the palette selected. In either case, now is the time to begin sowing the seeds of your score.

For me, this process is enjoyable and fruitful - provided I can stay focused. For me, this cycle of composing repeats itself over and over for the duration of the project, and the primary function of this cycle is to simply identify the current musical target. This may be something as simple as 'create a new scratch theme for Character X', 'recapitulate the main theme', or 'score scene 14 in its entirety'.

For the purposes of this tutorial, I'm going to create an imaginary target. Let's say that I need to score a scene wherein the main character is in deep reflection over a recently traumatic experience in his life. There may be some simple voiceover, and a montage of visuals to accompany this section - you know, the usual film montage stuff!

Part of establishing the current target is getting as specific as possible about what kind of final output is needed. The more clear you can get on this stage, the easier it is to stick to your schedule and to deliver a solid product at the end. 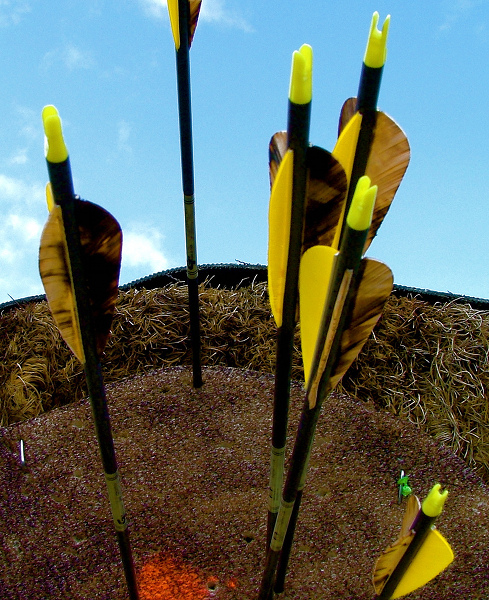 For me, one of the most difficult aspects of composing is simply doing it. The discipline required for composing should never be underestimated, and you must do everything you can to treat your composition time as sacred. Turn off the phone, close the door, disconnect your internet - whatever you have to do in order to truly focus and 'get in the zone'. This zone will be different for everyone - but it is critical that you find a system that works for you.

Once the time for composing has been set aside, you must simply begin. Start writing as much as possible - keeping all of your ideas as separate files or sheets or cues, whatever you need to get the energy moving and to move through the haze to find the jewel at the center.

From a purely practical perspective, there are a great number of tools at our disposal as composers that can aid us in the quick capturing of musical ideas. For some, a sheet of manuscript and a pencil is all that is required to begin expressing ideas. For others, time at the piano or guitar and perhaps a portable recorder. Still others, like myself, use software systems such as Logic Audio to take us through all phases of composition. In Step 4, I'll give one example of one tool that can be used to help us in throughout the composition process. 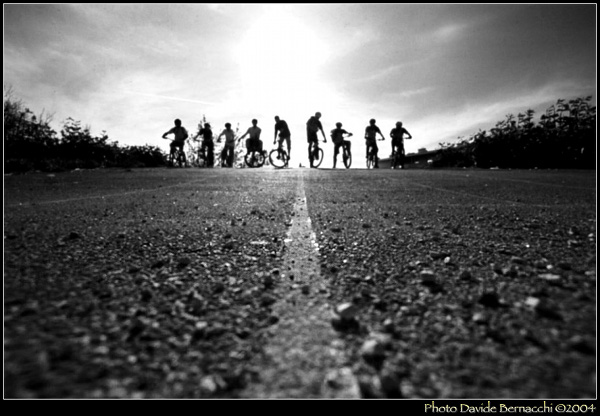 One of my favorite tools for sketching out ideas in Logic 8 is the 'Takes Folder'. Essentially, this tool allows you to record multiple takes of a given line, and select among the best takes. Logic has special provisions for both audio and MIDI takes - so it can be useful for tracking live audio or using software instruments. For the purposes of this tutorial, I'm going to use MIDI Takes, since most of my initial sketches are done using a software instrument (usually a simple piano patch). 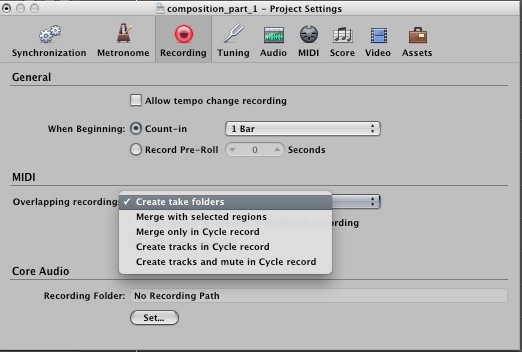 Next, we'll set up the cycle record functionality of Logic by dragging along the Bar ruler at the top of the Arrange window. You should see the Bar turn green in the areas where you're now set to Cycle record. Additionally, the Cycle transport icon will turn green.

As you begin recording you'll notice that at the end of the cycle, the time slider loops back to the beginning of the cycle, creating a new take that is 'encapsulated' in a folder. Before 'unpacking' the folder, your track will look something like this:

By clicking on the small arrow in the top right-hand corner of a packed folder, you can select which take you wish to audition, rename a take, delete a take, or unpack the folder into individual tracks. There is a lot of flexibility here for capturing ideas for your next cue! 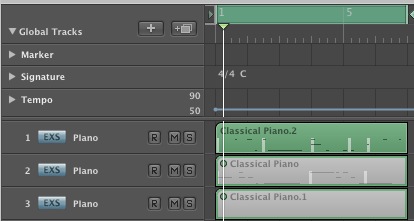 We've only scratched the surface of one possible compositional process. In our next tutorial, we'll dive more deeply into thematic development and arrangement!