In this article, we’re going to look at ten things you can do to help maximize the performance of Reason, fix various annoying issues, and avoid CPU strain during heaving automation and interaction with other DAWs.

Back when Reason was first introduced to the digital audio community, many users had difficulties running the program because of the performance requirements. As technology evolved, however, most users began to acquire computers that were more than capable of running Reason without issues.

People then began discovering the power of ReWire, using Reason as an instrument or effect in other DAWs. This brought the issue of performance back to the forefront for many users, particularly those who wished to run Reason alongside an intensive program such as Pro Tools or Logic.

If you’re like me and you don’t work with just one program at a time, you need them to be able to interact with each other without negative performance side effects. So let’s take a look at ten simple things you can do to increase the performance of Reason, so that you can use Reason and your favorite DAW at the same time.

Keep in mind that, while most of these suggestions are aimed at decreasing the CPU power that Reason requires, some of them result in a lower quality sound (however noticeable it may be). If you’re looking to improve the quality of your sound, steer clear of suggestions that include a warning about effects on quality. For example, if the suggestion is to turn off High Quality Interpolation, turn High Quality Interpolation on.

We’ll also solve a few commonly encountered problems, so let’s get to it.

When you first install Reason, it tends to do a lot of work and configuration for you, by detecting your various audio devices and MIDI controllers. However, as smart as programs try to be, they can’t quite measure up to human intelligence. If you’re having issues with your sound in Reason, or if you just think things should be sounding a little bit better than they are, go to Preferences > Audio.

What you want to do is use the driver with the lowest possible latency. If you can, use the ASIO (Audio Stream Input/Output) driver, as it usually has the lowest latency and best interface with the sound card. If you don’t have that, try using the DirectX driver, or whichever driver has the lowest latency, which is shown right below the “Buffer Size” slider.

Doing this will also solve a very common problem in Reason: slow MIDI playback response. Many users have experienced it, where you hit a key, and what seems like ages later, the sound is actually triggered.

If you are using the best sound driver you have available, it is advised not to use the Buffer Size slider, as this will cause issues.
This is contrary to Reason 4’s manual, which advises raising the buffer setting to reduce computer overhead. If you’re using the right driver, most people report that this actually decreases performance. 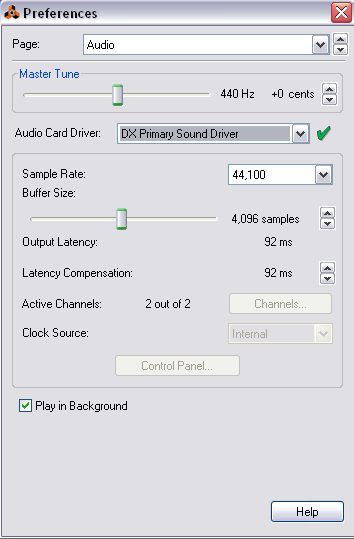 One of the more obvious suggestions that tends to be overlooked is to minimize instruments while you’re not editing them. You may not think it would make a big difference, but Reason puts a lot of CPU power into lighting up all those LEDs and cool patterns. It might not make a difference if you have 2 instruments, but what if you have 20? If you click the small arrow in the corner of the instrument, you can minimize and hide them, vastly improving Reason’s performance.

Reason’s system of being able to view cables and wiring is a really unique and interesting innovation. However, it’s also costly for your CPU. If you’re not actively wiring devices together, hide the wires.

To do this, press Ctrl-L for PC users or just L for Mac users, or go to Options > Show Cables and uncheck it.

Suggestion #4 — Lose the Bells and Whistles

Reason has a pleasing aesthetic appearance, and has some nice graphic features thrown in to help please the users. Unfortunately, this eye candy tends to lag up your computer, so if you’re especially worried about CPU usage, turn them off.

To do this, go to Preferences > General, and uncheck the three appearance boxes there.

When you’re using pattern devices such as the Matrix Pattern Sequencer or Redrum, significant CPU power goes into actively playing the patterns directly through the devices. If you’re not going to be editing the pattern anymore, why not copy the pattern to track?

The Dr. Rex player has the “Copy Loop to Track” feature, and Redrum and Matrix have their own respective “Copy Pattern to Track” buttons. Try making use of these habitually to help improve your Reason recording.

Suggestion #6 — Optimize Your Instruments and Samples

Warning: this will affect the quality of your sounds.

Get rid of all the stuff you’re not using (which you probably should have already done already). Next, if you’re playing back samples at higher than recorded frequencies, consider using a program such as Recycle to pitch shift it.

Next up, for any devices that play in polyphony, lower the number of voices. For any instruments, you can play them in mono (obviously you will lose quality again here). Now, there is an obvious thing you can do, which is decrease the sample rate in Preferences. However, this tends to kill quality faster than any other performance booster.

Lastly, deactivate filters and effects on devices. For example, on a Thor synthesizer, get rid of all the LFOs and Filters that you aren’t using.

Of course, if you’re looking to improve sound quality rather than performance, set a higher sample rate and turn on high-end sound features (covered later).

Suggestion #7 — Use CV instead of Automation

So you’re really stressed over CPU usage? You can use CV routing instead of automation on devices. This is somewhat difficult to explain without giving an entire lecture on CV, but I’ll give you an example.

Use the Curve CV OUT from the Matrix Pattern Sequencer to “automate” the Pan CV IN of a mixer. This way, instead of recording an automation lane in the sequencer, you can just use a device to do it. However, your routings will not be saved if you save an instrument patch (as it’s an external device).

Also, you’ll no longer have control over the automation as you would in the sequencer, so if you can, avoid using this one unless you have to.

If you’re getting the error message “Computer too slow to play song!” odds are that it doesn’t mean anything good, so let’s look at an easy fix for this. Go to Preferences > General, and use the CPU Usage Limit setting, and turn it to “None.”

Now, this will make that stupid error message go away, but there is a price to this. What will happen now if your computer is too slow, is that you’ll get a few pops and glitches in your audio track. These shouldn’t be audible when you render your track to .wav, but it can be annoying during playback inside the program.

Warning: this suggestion will affect the quality of audio in Reason and is a measure of last resort.

On almost every instrument device, there is a small button that says High Quality Interpolation or Low Bandwidth. Low bandwidth, if enabled, will remove some of the upper frequencies of whichever sound is playing. Usually these sounds aren’t audible, but it’s still nice to keep them around if you can. If not, you probably aren’t missing too much.

High Quality Interpolation makes a bit more of a difference, because if you disable it, your samples will be played back at a lower quality. But as always, if you really need more CPU power, you can turn it off.

Use this sparingly as it will decrease your sound quality. If you’re looking to improve sound quality, make sure you keep these features normal.

Okay, this is less about saving CPU power, and more about fixing another common glitch in Reason. If you do a lot of effect automation (particularly with automating a device’s “On-Off-Bypass” switch), you might notice these audible pops right after the switch.

If you want to get around this, instead of automating the bypass on the effect, automate the “Wet/Dry” knob (such as on the RV7000) or wire it as a send effect to the mixer, and then automate the send knob on the mixer.

The reason for this is that automating the switch itself will cause the message to be sent suddenly, causing the pops, whereas automating the wet/dry or send effect does not, because a state message is always being relayed.

Reason is a very powerful piece of software, and places a lot of demands on your system, particularly when ReWired into another DAW. Hopefully these tips allowed you to continue working with Reason and solved the various performance issues you might have.

Some of these tips are simple and do not affect functionality or workflow, but at the point where you have to make compromises with the quality of your work, a new computer is probably justified. As always, I’ll be checking in on the comments regularly.