2 Simple Tricks to Fit the Kick and Bass Together

One of the most commonly asked questions in audio is how to make the kick drum and bass sit well together in the mix. Since they are both dominating the same low end spectrum, and are very important instruments to the overall mix, the listener needs to hear both of them clearly. But sadly it's not always easy to make them play well together.

Since the bass frequencies are more powerful and tend to muddy things up easily it's hard to make these two instruments play nice. But there are a few techniques that have been used throughout the years to take care of clashing bass guitar and kick drum. In the following tutorial we'll go through two of them: carving out EQ areas and side chaining.

One of the most commonly known tricks for making two instruments play together is making each one have a piece of the pie. It's like dividing the toy box amongst two kids, one kid gets these toys and the other gets the others.

With the bass guitar and the kick drum we have a similar problem. We have the low end spectrum, from approximately 50 Hz upwards to 100 Hz that both instruments like playing with. But we need to separate the frequency spectrum between them, making each instrument play in a separate part of the spectrum.

The original, somewhat unmixed clip of the kick drum and bass guitar sounds something like this:

A good starting point is to find out which frequencies accent the instruments. If you look at the range between 80–100 Hz you could start by giving either instrument a boost in 80 Hz and then cut 100 Hz in the same instrument. If you do the exact opposite to the second instrument you've effectively carved out a little niche for both instruments to play in.

It obviously doesn't have to be 80 or 100 Hz exactly, just move it around until it sounds good to you. But once you've boosted one frequency on the kick drum make sure you cut it on the bass guitar. 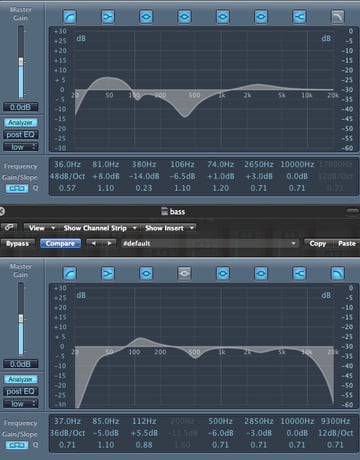 As you can see in the image above I've boosted the kick drum quite a lot. I wanted the kick drum to be lower than the bass guitar so I chose to boost it around 80 Hz. Since I used a shelving boost a lot of the lower frequencies below 80 Hz are boosted too, resulting in the thicker sound this kick drum needed. I had already cut a significant amount around 300 Hz to get rid of the boxiness in the kick drum and since I used a fairly wide Q it extended all the way to 100 Hz.

On the bass guitar I didn't need as much low end so I sliced a little off the low end there at 85 Hz. But I still wanted the bass guitar to sound good, just not so bassy. By boosting at 100 Hz I still retained that character of the bass without all the extra low end.

By giving specific parts of the frequency spectrum to each instrument we achieve a type of separation between them. They both retain their character but they just don't clash as much.

This is what we end up with. A bass guitar and kick drum that play in unison without interfering with each other.

Another popular thing to do is to use a compressor's side chaining feature to duck the bass behind the bass drum. The compressor becomes aware of each kick drum hit and compresses the bass guitar whenever the kick drum is playing. This can tighten up the mix considerably, especially if you have a thick bass guitar that always seems to get in the way of the kick drum.

It's easy enough to do. Just insert a compressor on your bass guitar track and via the side chain, tell it to listen to the kick drum. In Logic you just clik on the box that says Side Chain and select the kick drum track. Other DAWs have similar ways to achieve the same thing. 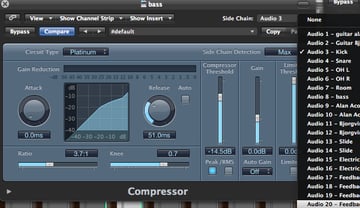 I set the compressor to compress the peaks of the signal by setting it to Peak. I used a very fast attack to accent the effect and I set the release time in time with the bass drum. The ratio and threshold were set haphazardly so that the compressor would compress around 6 dB with each kick drum hit. That might be too much, but for the sake of the example it works well.

Listen to the end result here:

Dealing with the kick and bass is an important aspect of creating a great foundation for a mix. By separating them and giving each instrument a place to shine you achieve a nice separation while still keeping the low end tight. Whether you do that with creative EQ or with compression tricks is up to you.

Of course, you can use both tricks at the same time, but sometimes one is enough. A simple bass and kick part might only need a little controlled compression to make everything fit together, but sometimes you need to add and subtract frequencies to get the cohesion you are looking for.