We all know recordings that are out-of-phase wreck havoc on mixes. As such, these two tips I am about to share are a bit ironic in that they purposefully create phase issues for positive effect. So read on for two quick tips for the price of one.

The Haas Effect is a psychoacoustic effect that was first discovered by Helmut Haas in 1946. It has to do with the way humans localize sounds emanating from anywhere around them. The concept is rather simple in that it is based on human anatomy; a sound emanating from the right of a person will hit his/her right ear slightly before hitting the left ear and vice versa. Hass' findings teach us that the directivity of a sound is solely determined by the initial sound a) if the secondary sound arrives between 1-35 ms later and b) at no more than 10 dB louder than the initial sound.

To set up the Haas mixing trick (not invented by Haas, but named after his discovery) you will need two copies of a mono track, one panned to the hard right, another hard left and simply delay one of the tracks by 1-35 ms (any longer will begin to create an outright delay). The source will appear to be coming from the non-delayed side, while producing a thick and textured sound.

Here I have set up a basic mono synth and sent it to two separate aux. tracks. The first I panned hard left and the second I panned hard right. From there I put a tape delay on the right channel and set it to a 30 ms delay with no feedback and 100% wet. I then adjusted the level and rolled off some of the high frequencies of the delayed signal to further differentiate the two channels.

This is how it sounds just before the delay is added...still pretty mono.

After the delay, the sound is much fatter and natural.

This trick is most often used in instances where one would want to fatten a mono sound panned to an extreme (distorted guitars are a common recipient of this technique), as an alternative to traditional panning where one would need greater control over stereo placement, or as a more realistic pan option where one would filter and attenuate the delayed signal (as I have done) to add dynamic and frequency differences as well.

When using this trick, it is important to remember that such small delay times are bound to bring up phase issues / comb filtering and one should experiment with different delay settings while the mix is summed in mono in order to avoid canceling out large portions of the sound.

Trick 2: The Outside of the Speakers Trick

This one is even easier to set up and gives a far more pronounced effect. All one needs to do is invert the phase of either the left or right channel - and done! On loud speakers now, the sound will appear to come from somewhere outside the speakers and envelope the listener.

It's a pretty great effect in its own right, but does come with a few drawbacks. The first, and most obvious is that it will completely disappear when summed to mono (assuming both channels are at the same level). The second is that it only works on loud speakers and is most pronounced only when the listener is centered in the speaker's sweet spot. As such, it is mostly reserved for special effects and not commonly used. 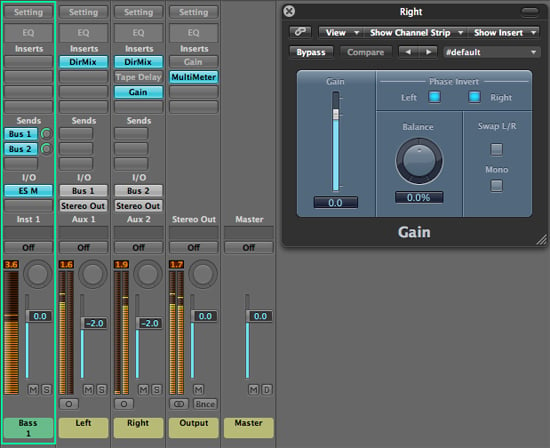 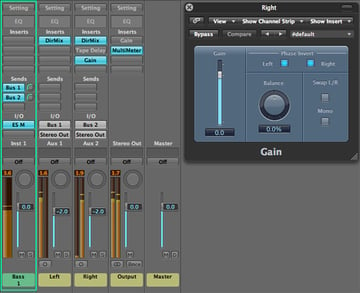 Listen to this track on speakers and use sparingly in the mix.