3 Differences Between Live and Studio Mixing

Live sound mixing varies greatly from
studio mixing. The fast paced adrenaline rush of the concert venue
versus the calmer and quieter work area of the recording studio.
Studio mixers can take their time while the live sound tech has to
think quickly and react in real time so the difference can be
significant, even though some might say they are doing the exact same
thing. Besides this, there is also a difference in their
workstations. Mixing desks in a live situation can be very different
than the one used in a big recording studio. Let's go through some of
the main differences between both the mixing desks and their
respective users.

In big recording studios, you usually
come across big mixing desks that have two types of faders on the
same track. These mixers are called In-Line mixers.

This is the SSL 4000 G+ In-line mixing
desk. Without going into full detail of its complexities, notice how it has two faders per channel. It has a large fader
at the bottom, and then a small fader above. You use the different
faders for different things, depending on which stage you are in,
whether it be recording, mixing or overdubbing. When recording, this
desk jumps into a different position than when mixing.

The basic signal flow when recording on
the SSL is as follows:

It's important to listen to the signal
after it goes through all of the equipment as it might be changed
by the equipment. So listen how the signal is going to sound on tape, not
how it's coming in. By being able to control both the level of the
signal going into the desk with the normal gain knobs, and then the
level going into the multitrack (DAW, Pro Tools, etc.), you get a higher
degree of control using an In-Line desk than a normal one.

Not a lot of people have the
pleasure of working with an SSL everyday. And some don't even like
working on an analog desk. I find it tiring to work on the SSL
because if you are mixing and you want to come back another day to
finish, you have to take down the position of every fader, every knob
and every setting so you can recall it again when you come back. And
that sometimes doesn't work because you find that you can never put
it back exactly as it was.

Because digital audio has gotten better
and better over the last decades, digital mixing desks are often
used instead of the old analog mixers. In a digital mixing desk you
can save all your settings when you leave, and recall them exactly as they
was before. This is a huge advantage when you aren't the only one
using the desk.

There are two types of digital mixing desks out
there: one has built in EQ, compression and effects processors,
effectively working like a normal mixing desk; and the other is
only a control surface. A control surface looks like a mixing desk,
but it only controls the DAW you're working in.

This is the Control 24 Pro Tools
controller. Although it has pre-amps, it isn't actually a mixing
desk. It's hooked to Pro Tools in a way that whatever you do on the
desk, moving faders, panning etc, happens directly inside Pro Tools.
So in a way, it's just a really cool and powerful mouse. These types
of controllers come in handy when you like mixing inside the box, but
want to be able to push faders and twist knobs for a more human feel.
I prefer moving faders on a console than moving them inside a DAW
with a mouse and I imagine most of you like that too.

When you only want your audio program
to act as a big playlist, and like using built-in EQ or compression
of a digital desk, there are a few options out there for you too.
Normal digital mixing desks are hooked up to an audio program and
each channel inside the program linked to a dedicated fader. You
don't have to use the audio program more than you want to, as you
have built-in processors on the desk, but by using both things at the
same time you can get best of both worlds. For instance, you can save
the processing power of your computer by using the EQ and compression
of the mixing desk, and then using more dedicated effects, or
automation inside the program.

This is the Tascam DM-4800 digital
mixing console. It has built-in EQ and compression and two
multi-effects processors. This one is hooked up to Logic and can work
as a controller, like the Control 24. But it is more powerful than
the Control 24 which only controls Pro Tools, and doesn't have any
internal processors. As said before, many people like working in
digital because it allows them total recall of every setting they had
the day before. On the Control 24 you just save the Pro Tools file
and the desk recalls it exactly as you save the file.

On the Tascam
you save your session inside the mixing desk itself, and when you
come back it will recall every setting from it's memory. With digital
there comes convenience, and although many people still argue over
the sound quality of digital versus analog, you can't argue that
digital mixing desks are way more convenient than the analog ones.

Mixing Desks in a Live Situation

In live sound situations you don't need
all that excess baggage of an extra pair of faders like on the SSL,
or the need to control Pro Tools remotely. You aren't recording
anything and you only need the sound to go straight into the desk and
out again to the PA (public address system). So live sound mixing desks have
a more simplified look and signal flow.

This is the Soundcraft GB2 live mixing
desk. Notice how much simpler it looks. It only has one set of
faders, the control room to the right is a simple affair with only a
master fader and two sets of group faders. This mixer is much easier
to handle compared to the SSL with it's various modes, routing
matrixes, faders and groups.

The signal flow is as easy as it gets
as well:

That's as easy as it gets.

There are digital mixers available for
live sound as well. These work in a similar way to the Tascam DM-4800
as they have built in processing such as EQ and compression. With
normal analog live mixing desks like the GB2 we need dedicated
outboard processors and effects to enhance the sound, but that's
built-in to the digital mixers. So in a way, as the sound industry
becomes more digital every day, our lives become easier. At least we
have to lug less stuff around in a live sound situation.

Even if the studio mixer only mixes inside the box with his DAW, the result is bound to sound much better than some of the garbage sound systems the live engineer needs to work
with.

Do you prefer this? 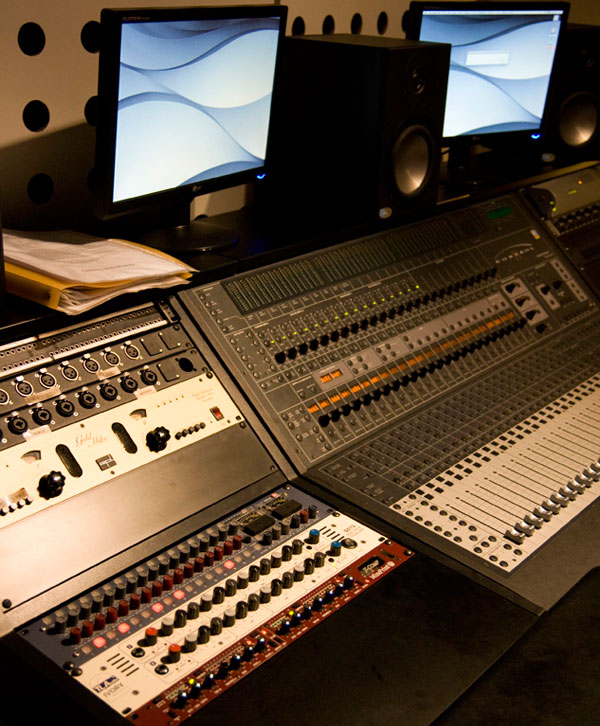 3. Difference in Time and Creativity

There is a benefit involved with being
able to take your time in the recording studio that you also don't
have when you are trying your best to make a live band
sound tight. In the live venue, you only get one shot, and there's
only one performance by the band. So you'd better make sure that
performance sounds great because there's no undo button, no punching
in for a better take and certainly no editing.

Being able to get the best performance
out of the artist is a great thing in the studio, and editing
together the perfect take is a joy to mix afterwards. Studio and live
performances are a pleasure to mix, but if you get an insecure
vocalist for example, you can't edit his good takes together in a
live venue. At least in the studio, you can end up with a convincing
performance after heavy editing.

Time for creativity is also more
available when you are working in the studio. A live sound
performance only has the members of the band playing their
instrument, so the general sound of the concert is dependent on how
tight and good the band plays. But in the mixing studio you have room
to play around with delay, reverb, overdubs and layers. You have
more tracks to choose from, more time to tweak parameters and
generally more creative freedom. There are no mixing engineering
secrets in the live venue, it's all dependent on the band.

Although the field of studio sound and live sound encompasses the
same basic principles, the approaches needed for each one is
different. Whether it be different attitudes or equipment there is a
certain uniqueness to each situation.

Live sound is based on fast
paced decision making where the music in going on right in front of
your eyes while a studio mixer might be able to take his time,
fine-tuning his mix to perfection. The same applies to the equipment,
where a live sound desk needs to be easy to navigate and control,
while the studio mixing console has more complexities in it's signal
flow.

In my opinion there is no better job. There is joy to be had with mixing a great performance coming
out of a great sound system, and there is also satisfaction to be had
with creating a great take out of many mediocre ones. It's all a
matter of taste. Sometimes live sound can rule the world, and
other times studio mixing is the calm comfort zone you want.