The vocal sound is one of the most important aspect of every mix. If your vocal is buried in the mix, uninspiring and flat then your listener probably won't care that much for the song. Your guitars might sound weird and your other instruments might be badly mixed, but that just might be your sound. But if you don't mix the vocals well, everybody will notice.

Using the regular processors of EQ, compression and the like can only take your vocals so far. You usually add some form of effects. This usually results in a nice reverb, but it's easy to overdo it on the reverb side. Instead, the next time you want to add some flair to your vocal sound, try out some of these delay tips.

Although the tips that follow are used on vocals, you might try them on other instruments such as guitar or other solo instruments. A nice slap-echo adds a nice ambience to a vocal, but it can also add a new dimension to saxophone solo, for instance.

Take note that all these tricks are done using sends. That is, we process the vocal independently, by sending a copy of the vocal to a new auxiliary bus where we add our delay. If you're confused about the difference between sends and inserts, check out How to Set Up Send/Return Effects here, as well as When is it Smarter to Send or Insert?

It can also be used to just add a little bit of space to your vocal sound. Use it subtly, instead of reverb, to get more depth to your vocal. Reverb tails can get messy and tend to clutter up your mix if you're not careful whereas delays and echoes fade away fairly quickly, leaving you with a cleaner sound.

In the following example, I'm using a rock vocal with an 80 millisecond mono delay with about one repeat.

Definitely very dry, and will stand out like a sore thumb in a mix without some space around it.

Here's the vocal with the short delay:

You can hear how the vocal now has some space around it. We've essentially constructed a small reflective room around the vocal with the delay. The vocal bounces off the virtual walls and slaps back with the vocal, creating the effect.

Using Echo instead of Delay

We can also use an echo instead of a delay. It will give you a very similar sound. The echo plug-in in Logic doesn't give you the option of setting the echo in milliseconds, but rather in notes like 16th notes and the like. In this example I've set the echo to dotted 16th notes and I've added a little more feedback just for fun. 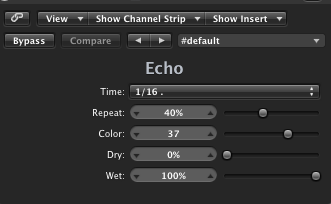 This is what we end up with:

Not noticeably different, except for the amount of repeats. So whether you use a delay or an echo for your slap-back doesn't really matter. Just try out the different plug-ins at your disposal and see which one you like the most.

For a bigger sound, using a stereo delay with a medium delay setting is a good way to go. Whereas the slap-echo is a “close” sound, longer delay times result in larger sounds. This is the typical rock arena delay, something that's very distinct in hard rock and a setting I used often while doing live sound.

Once again, we're using the same vocal sample as before, but we've changed the delay.

Instead of a mono delay or an echo we're using a stereo delay with two different settings on either side. With a 200 millisecond delay on one side and a 150 millisecond delay on the other you get a bigger and wider sound. There's also very little feedback, about 10%, or only about one repeat.

Notice how much the feel of the vocal changes just because we swapped out our delay effects?

In ballads or songs that have long, sustained vocal phrases, you can allow yourself to lengthen the delay. With long, sustained notes the delay thickens everything up without really getting in the way. If you mix the delay underneath the vocal then you'll just get this thick and juicy vocal sound. And if you time the repeat with the music, the one repeat at the end will really add a different character to that passage.

Here's a different vocal passage, without any delay.

Now, let's add a stereo delay using a similar technique as the one in the rock delay tip. This time we're changing the delay times to 500 and 700 milliseconds. Like before, we're only using 10% feedback, or about one repeat. 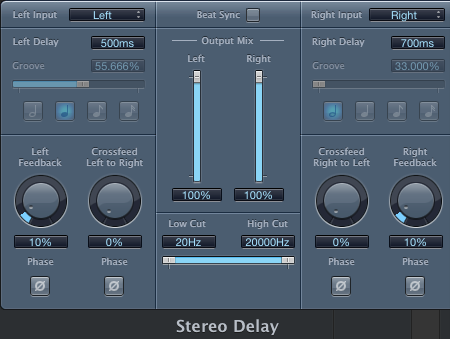 As you can hear in the sample below, the delay swells in and thickens up the vocal throughout the phrase.

If you want the delay to blend in better you can add an EQ after the delay and filter out the high frequencies. It will give you the same thickness effect, but the vocal delay will sound darker and blend in better.

These three delay tips can be used in all manners of situations. Of course, depending on the BPM of the song as well as the characteristics and rhythm of the vocal, some tips might be more suitable than others. Next time you're trying to find a nice way to spice up your vocals, try some of the aforementioned tips. They really work.