Creating a convincing and tight mix that is 'tall, deep and wide' is far easier said than done. However, if the mixing process is approached in a systematic way the outcome will be far better and far easier to achieve.

In this series of tutorials, we will be deconstructing the process of mixing and presenting one possible workflow scenario to make life behind the mixing console (virtual or otherwise) easier. In this portion of the series we will continue on with our project by creating a panorama strategy for our sounds in the 3-dimensional sound space.

If you need to brush up on what we talked about last time, you can do so here.

Just to recap, this is the screen we left off on. 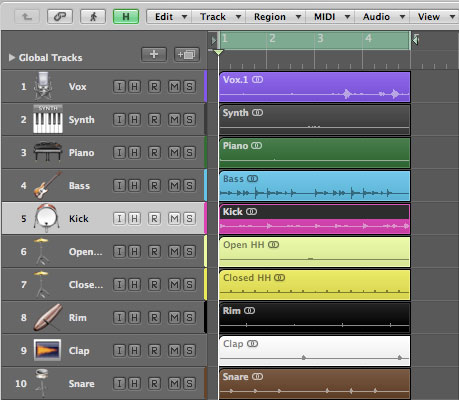 It is important at this point to post a disclaimer stating the fact that these tips are general guidelines and should not be adhered to automatically in every situation. Much of mixing is subject to program material and personal style and therefore the mix needs to undergo a lot of experimentation before it will sound 'right'. These tips are ones most everyone can agree on as general rules but do not necessarily work in every instance or for every producer.

That being said, the first thing we want to do after our initial set up process is to think of a solid vision for our mix that we will keep in mind throughout the mixing process. The vision and the ability to attain it is a large aspect of what distinguishes great mixers from mediocre ones. The vision is something that is largely subjective, but is commonly achieved by asking a series of questions pertaining to the song and serves as a consistent goal throughout the mixing process.

What elements are most prominent? What is the feel or flow of the song? What elements should be emphasized/de-emphasized? Should the song sound intimate and close or large and superhuman?

In this particular loop, I feel the vocal is largely expendable and the most important aspects are the drums and bass with the piano and synth residing somewhere in the middle in terms of importance. As it is basically a hip-hop instrumental, I feel it will be somewhat low end heavy, groove based, and digital/electronic (as opposed to acoustic/organic) since it is an 808 beat and uses an obvious synth element.

If this were an entire song, the vision would be more in depth and more interesting in terms of what should be expressed, how things should flow etc., but for the purposes of this tutorial series this will more than suffice. 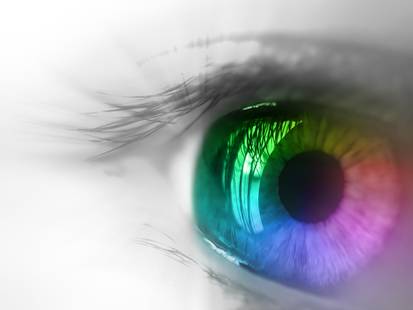 Keep a multi-dimensional vision in mind at all times.

The next thing we want to do is to plan our panorama strategy. To do this, we want to take stock of our sounds and draw them out in a panorama sketch in order to get at least a general idea of how things should sit at the end of our mix. In this particular track, we have a drum kit consisting of a kick, snare, clap, high hat, open high hat, rim, a bass, a synth, a keyboard and a vocal track.

The most important and lowest registering elements are always panned down the middle. The kick, snare and bass are therefore always centered as they are the foundations of the groove and the lowest registering elements (our clap basically serves as the 4th snare hit of a 2 bar loop, so that will go in the center as well). These sounds do not necessarily have to be in mono, but it is a good idea to try this out (you can always add stereo information later). If keeping them in stereo, make sure there is a strong centered presence and no extreme stereo information.

Vocals are always sent down the center as well. The stereo width of the vocal should only be wide enough to keep the phantom center and not generally be mono. If there is a chorus or backing vocal, these should be panned to the sides with the lower portions of the chorus closer to the center with the higher tracks panned more towards the sides (as per our rule of deep sounds in the center with higher sounds to the sides). These backing vocals should be sent to a separate group than the main vocal and balanced to fit just underneath the lead vocal.

Although it is recommended to place the other drum elements (at least in acoustic music) as they would appear to a listener of a live band, in most hip-hop and electronic music, this is mostly open to interpretation. Our open and closed high hats should probably inhabit the same area of the panorama field as they would come from the same high hat in a standard kit. I like how they are working already so I will leave them in mono and panned at about 11:00. High hats are important elements of the groove so should remain somewhat centered if not completely. The only other element of our kit is the rim which I will pan to 1:00 to balance out the high hats.

Panning According to Plan

It is important to note in Logic that the knobs that appear to be pan knobs just above the level faders in the mixer are actually balance knobs for balancing between the right and left channel level. Although turning these knobs may give the illusion of panning, they do not affect the stereo placement. To actually pan in logic we have to insert a direction mixer in one of the insert slots, which I have done below.

The mixer with direction mixers inserted.

I then summed all the tracks to mono in order to hear the thinest sound possible in terms of stereo width and roughly placed them around the panorama field according to the sketch above. Turning the elements to mono (and even turning off one speaker) helps me to get a very precise idea of the sound placement and ensures there are no elements covering one another in the stereo field.

Our track after panning and summing the events to mono:

When summing our sounds to mono, I noticed immediately we lost a lot of sound in our snare, vocal, piano, and open high hat due to phase cancelation. Phase cancellation is when the left output of a stereo file is out of phase with the right output. In other words, the left speaker cone is pushing forward while the right is pulling in. This creates cancellations in the stereo output which quiets or completely cancels the sound. 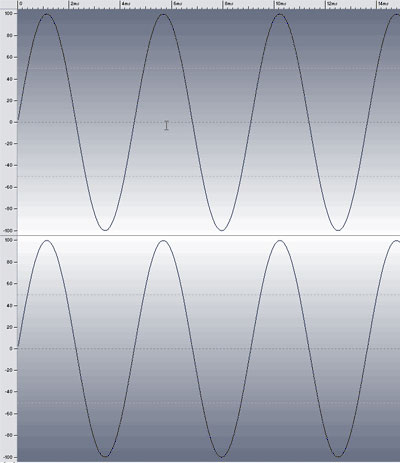 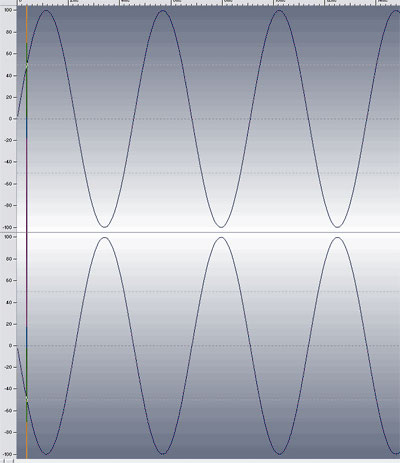 Sine wave 100% out of phase (phase cancelled). Left channel is positive when right channel is negative.

Converting our sounds to mono does away with the possibility of introducing this cancelation into our mix, but does so at the expense of stereo information. To get around this in our example, we can either keep our sounds in mono and re-introduce more mono friendly effects later on, narrow the stereo width of our sounds with the direction mixer until the sound is correlated, or throw out one channel of a stereo file and use the remaining channel in place of the missing one (left is now playing out of both left and right); then process one side slightly differently and pan each accordingly.

For our example, I am going to leave most everything in mono except for the vocal and piano. Although much of what is lost after summing to mono is reverb which can be reintroduced, these two elements are reliant on other effects for their distinct character. Getting rid of them completely would be counter to their core sound so I will simply narrow their stereo image with the direction mixer and leave it at that.

Our track after reintroducing some stereo effect information to the piano and vocal:

The only other point I want to bring up in this tutorial is the concept of frequency masking. Masking occurs when two sounds that inhabit the same frequency range are played simultaneously at different levels. In this case, the lower amplitude sound will be covered and indiscernible beneath the louder sound while making the louder sound muddy and undefined.

If you are having problems with masking, you can try one of several things:

Without checking a frequency display, I have already avoided obvious possible masking in my choice to pan the synth and high hats to opposite sides and also in my decision to pan the piano and synth to opposite sides. The kick and bass pose an issue where they play together and will most likely be side chain compressed at a later step. I'm really tempted just to drop the vocals completely as they do not sound very good in this loop, but will hold on to them for sake of having a vocal example.

Next time we will look at some EQ tricks for our various sounds as well as some special processing techniques to help make important elements stand out.