In this segment of our mix down tutorial, we are going to begin to look in depth into depth. Depth within any mix and listening situation is paramount to proper sonic understanding. Much like we see in 3D, we hear in 3D and taking out any one of these dimensions only serves to create a flat and unnatural sound. As such, the most common tools which give the illusion of depth (reverb and delay) become an important and necessary part of mixing.

What is Reverb & Delay?

Sound, much like light, travels in a spherical and expanding way from its source and is reflected and absorbed by the various objects it comes in contact with. Reverb and delay give us the sonic information necessary to not only get a sense of the sound's surrounding environment, but where the sound sits in space in relation to the listener.

Sound waves expand in a spherical way from their source.

There are several reasons to use reverb. The first, as mentioned, is to create a sense of depth and give our sounds a natural and believable quality. The sonic characteristics of reverb in any given space will tell the listener how far away the sound source is from him/her. A flat mix will appear to have all sound sources at roughly the same distance from the listener while a robust use of reverb and use of depth strategy will separate those sounds and create a believable, deep and interesting sound experience.

We can also take this separation to the extreme and use reverb as a special effect to draw attention or create emphasis. Several 80s rock tracks come to mind where reverb is used extensively on the snare drum to create a thundering sound separate and apart from the rest of the kit. This draws attention to the snare over the rest of the drum kit and adds an exclamation point to the rhythm.

On the other hand, we can use reverb to glue sounds together. A very common reverb trick is to send a slight amount of the drum sub-mix, or even the entire song mix to a reverb and nudge the reverb level until it tucks under the sub-mix/mix to where it is barely audible. The reverb in this case serves to put the material in the same acoustic space and 'glues' the sounds together.

Many producers also use reverb to create unnatural spaces for vocals, groups of instruments or even entire song sections. This helps to jar the listener's attention and force their focus to the clanging sound of a small plate or the cavernous, washed-out sound of a large hall - all depending on the artistic intention.

As far as initial and common depth strategy, one should think about instruments in order of importance (drums, bass, vocals, etc.) much like one would think about an initial mix down. In this example, I have bussed the drum sub-mix to a small drum room convolution reverb. I have then rolled off some of the highs of the reverb.

The reason for this is due to the behavior of sound: It is obviously a complex subject, but for right now we only need to understand that sound appears duller the further from the listener and brighter the closer to the listener.

I then tucked the level to where it is just noticeable under the drum sub-mix channel. Although the effect is subtle, you can definitely hear the difference when it is muted. Details, as you well know, are incredibly important to mixing (and pretty much anything else).

Here, the drum sub-mix is sent to a dedicated reverb which is mixed back in under the original.

Drum mix without reverb, notice how flat this sounds (especially the snare) in comparison.

Delay is another great method for adding depth to the mix. One problem with reverb is that if you use too many, the stereo field and sense of depth tends to become undefined and muddy. Delay can solve this issue by creating the illusion of depth without adding as many counteractive space simulations or muddy reflections as a reverb.

Below, I have sent the keys to a dedicated delay aux. set to 100% wet, rolled off the highs to make it sound deeper in the spatial field, panned the delay to the opposite side of the stereo field to make it wider and tucked it in under the dry key signal to blend it more naturally. Notice the subtle depth and fullness it adds to the sound.

The key output is bussed to a dedicated delay which is then panned opposite and mixed back in with the original.

Here I have soloed the key section to show it in its dry state.

The soloed keys with the delay.

Here are the wet keys and drums combined. 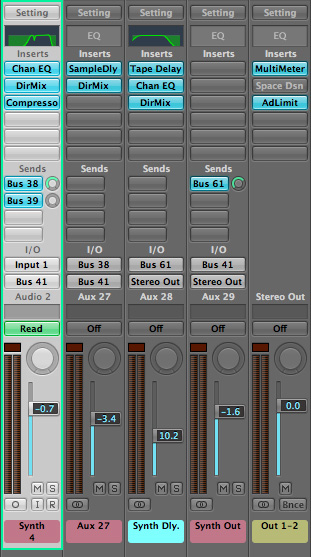 The synth is also sent to a dedicated delay, panned and tucked under the original signal.

Here I have gone and done the exact same to the synth; adding a delay and panning it opposite the original.

Although the synth already has a delay on it from the recording, the added delay, pan and volume control allows for a much better result.

A good way of getting your lows to sit better is to send a slight amount of your dry bass signal to the kick drum reverb. This helps your lows sit in the same acoustical space, thus gluing them together. This helps to keep the low essentials clear and in their own pronounced spatial environment.

This effect can be difficult to notice on first listen so I've sent a bit more of the bass than I usually would to the reverb to get a more pronounced effect. I try to use this trick whenever possible as it does wonders for your lows and really makes sense when you think about it. 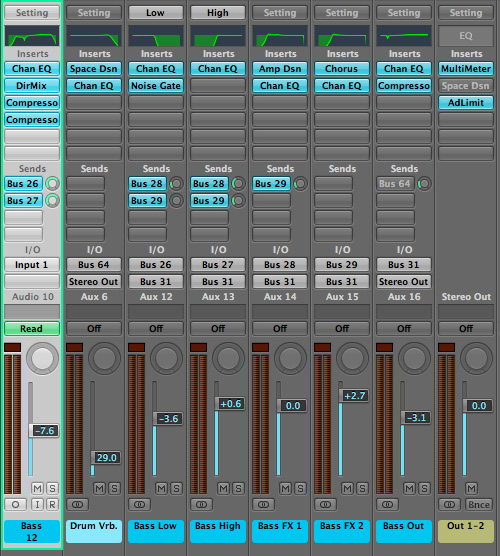 A slight amount of bass signal is sent to the drum reverb to put the lows of the kick and bass in the same acoustic space.

Listen to how the bass rides on top of the rhythm without reverb.

In this example you can hear how the bass sinks into the mix and melds with the kick drum and surrounding kit to act as a more singular unit.

For the next part of this project I decided to have a bit of fun and put some more or less 'special effects' on some of the percussion to help it to stand out, gain more emphasis, and/or to simply add a new texture to the mix.

The snare output is sent to an extra and dedicated reverb for emphasis. The snare reverb is then sent to the drum sub-mix reverb to tie it back in with the rest of the kit. The clap uses the same routing.

For the open hi-hat, I just slapped a reverb directly on the channel. It was a bit unorthodox in terms of my personal rules as I usually try to put depth effects after all of my sound shaping.

In this case however, since the open hi-hat and closed hi-hat are being routed to the same sub-mix channel I decided to take the fast route and not go through the extra steps and processing power it would take to separate the two sounds and run them through parallel and identical effects auxiliary channels. The fact that it sounded pretty good immediately and added a texture that would not be there otherwise (distorted reverb) cemented the decision.

The open hi-hat with a reverb directly placed on the channel. The reverb then goes through the same processing and coloration as the dry signal.

The dry and grating original.

Finally for this tutorial session I put a 'glue' reverb on the master bus. I set this to 100% dry and about 5% wet to set everything in the same space, however slightly. I also set the spread of the reverb to full to make the stereo spectrum wider. This 'master glue' really helps to add a final and subtle layer of depth, width and general coherence to the final sound. 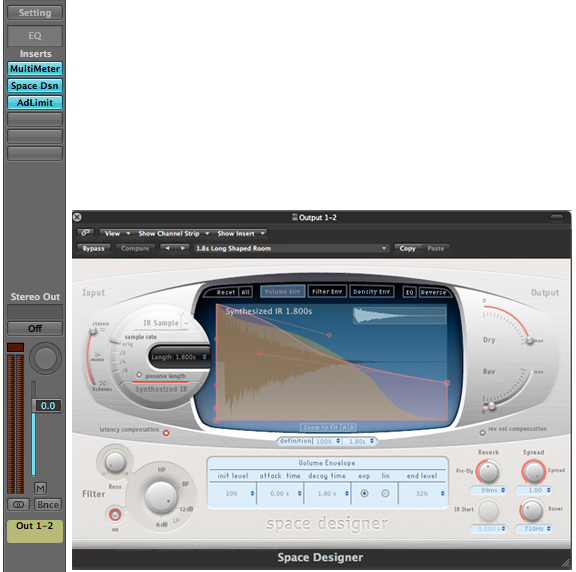 Reverb placed on the master output to 'glue' the mix together.

So, let's review what we've achieved in this tut:

Where we started today.

Where we are now...much better.