Although this is a series on mixing, it feels incomplete not to get into at least a brief discussion on master bus options and to discuss what exactly goes on when you print all your hard work to a single and final stereo file. Due to the depth of this topic, I am splitting it into two parts. 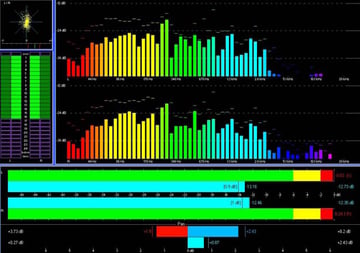 To begin, let's have a refresher and listen to how our track sounds thus far.

This is the raw track as it sounded way back when.

This is how it is sounding after the various stages of our mix.

As you can hear it is quite a bit better, but before I send it off to Capitol's A&R I want to give it a few detailed tweaks to make the overall track sound bigger and more balanced.

The first thing I did in this instance was to simply insert a gain plugin so I can adjust the incoming level pre-master effects chain to give myself a decent amount of headroom to work with. I've given myself a peak headroom of 4 dB which should be more than enough to work with. Usually between 3 and 6 dB is a good place as it allows me to hear the project while still giving room to make final adjustments.

The next action is to insert a multimeter so I can see exactly what is going on under the hood. The multimeter consists of two main components, the frequency analyzer and the goniometer. The analyzer section is the first thing you see when you open the multimeter and consists of 31 (not 32, as one may expect) frequency bands which each correlate to 1/3 of an octave.

There are a number of different options in order to view the bands in different ways. I usually find the default sufficient, but for the sake of taking a (more or less) accurate screen capture (as what I am looking at is time based), I have turned on peak hold detection (the orange bars) to show the general shape of the audio over time.

For the sake of comparison, I have created a new project and imported our loop as well as a few commercial releases as reference tracks. I have chosen two tracks with hip-hop beats as that is the genre we are working with and have run all three instrumental loops through the analyzer independently. 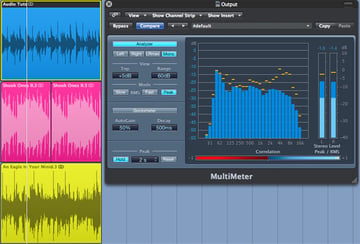 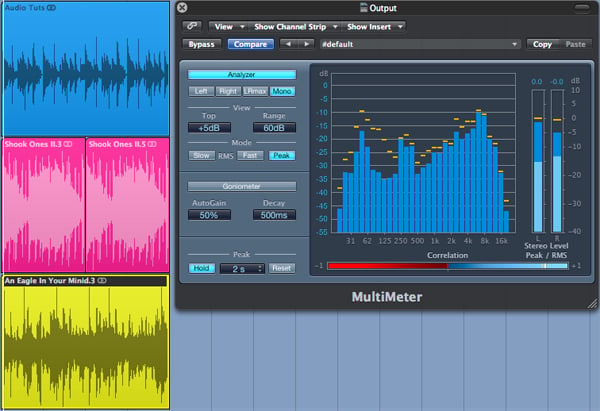 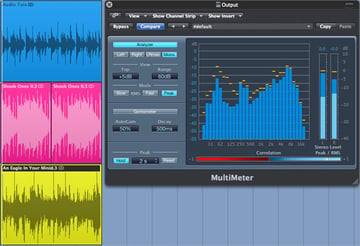 Right away, we can see areas that need to be worked on. I have rolled off too much of the high and low ends of the track during mix down - I'll chalk that up to working in a poor listening environment. ;) The overall shape is actually about on par with the reference material, but we definitely need to go back to the mix and add some high and low energy. (This could be done with an EQ on the master, but going back to the mix will be far easier and give better results).

To the right of the analyzer is the stereo Peak/RMS meter which shows two different levels simultaneously, the peak level of the input and the average level of the input (RMS, or root mean square). Here you can see we are peaking at around -5 dB and averaging around -20 dB (15 dBs of range). This is a bit too large of a range and should be squashed down to between 5 and 10 dBs which is where most commercial releases reside. We also need to boost the levels so it is peaking at around -0.1 dB to get things sounding nice and loud. We can clear both of these issues up in the master section rather easily later on.

The next main section of the multimeter is accessed by clicking the 'Goniometer' button on the left hand side. The goniometer shows the phase correlation as well as the stereo width of the incoming audio. Like the analyzer, there are a few adjustable display parameters, but usually the default is more than sufficient.

A completely correlated (mono) signal will show up as a thin vertical line in the center display while a completely out of phase signal (a signal that will cancel itself out in mono) will show up as a thin horizontal line. Ideally, we want our finished track to center around the vertical axis of the display and have a somewhat ovular and asymmetrical shape which will represent a phase correlated track with a good amount of stereo width. 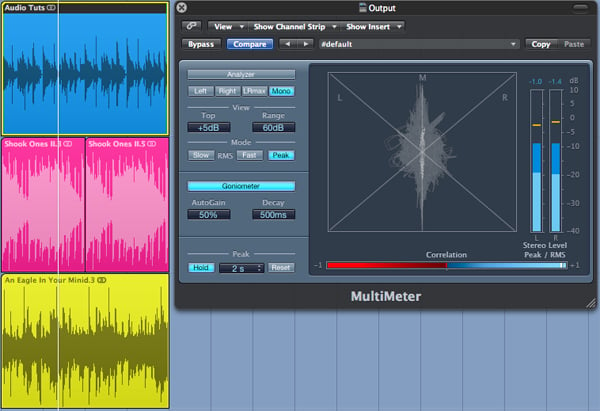 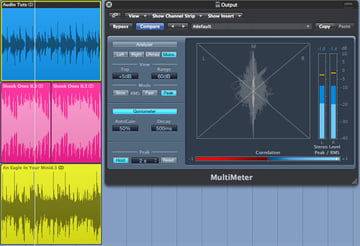 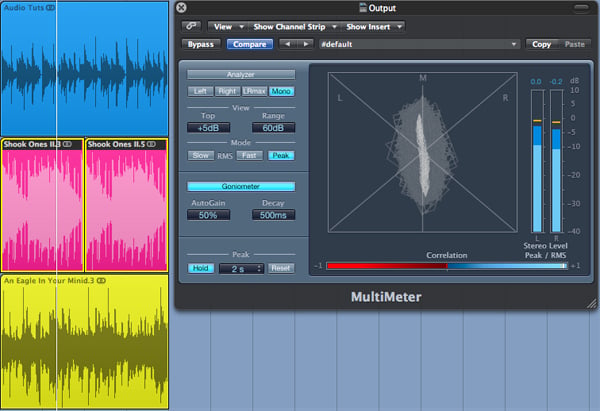 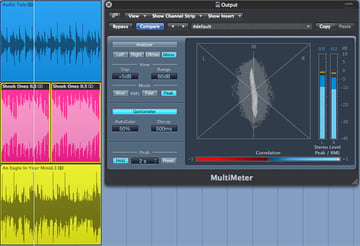 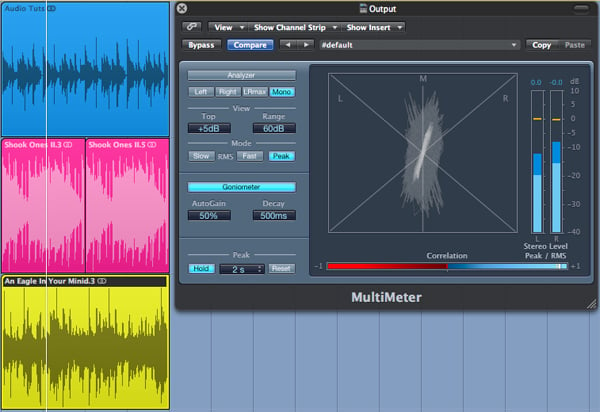 The darker grey shadow shows us a trace history of the goniometer's activity, and thus gives us a more accurate overall shape. Judging from the goniometer, I can see I should go back and narrow the one large clap hit that is making the trace image balloon in the center (I know the image does not show it, but the signal is long and narrow and only becomes a large circle when the clap hits). After narrowing it down a bit to a consistent shape, I will then widen the whole track on the master bus later on.

The red and blue meter at the bottom of both the analyzer and goniometer is a more basic correlation meter which simply shows mono compatibility. Even though the track does balloon somewhat (and is most likely a non-issue), we are still looking pretty good. (The sliding white bar is mostly stuck at +1.) The more to the right, the more mono compatible the signal; the more to the left, the more out of phase.

After going back and making the few key adjustments I outlined above, we are looking a bit better. 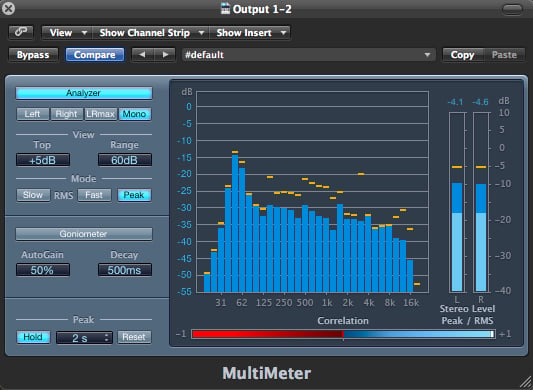 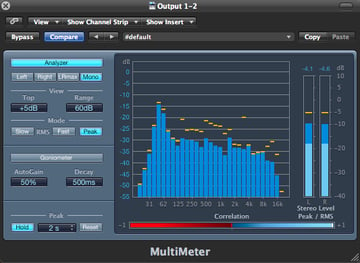 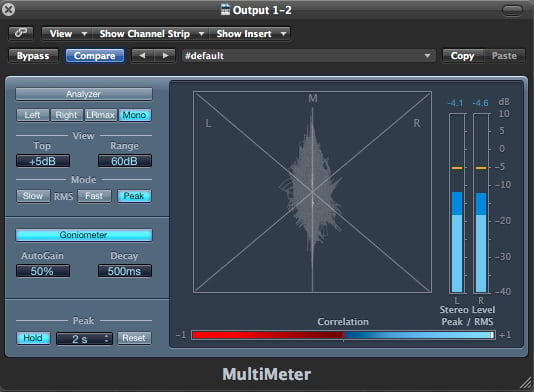 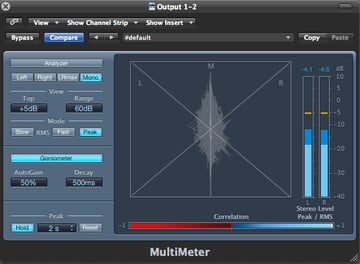 And more importantly, we are sounding a bit better too by thickening the bass, brightening the highs and getting the clap a bit more under control.

The multipressor is a multiband compressor which splits the frequency of the incoming audio into multiple bands and then allows you to compress (or expand) each band independently. It works somewhat like a dynamic EQ in that as the level of the focused frequency range passes its specified amplitude threshold, it is reduced (or increased) according to the parameters specified.

Unlike the standard compressor in Logic, however, the compressor section of the multipressor does not offer various knee options, circuitry types, or the options revealed in the disclosure triangle of Logic's vanilla compressor. Even so, it is an important dynamic tool and gives a much different and far better result in certain situations.

For this example (after a bit of experimentation), I have decided to set the low frequency range to 110 Hz and moved the threshhold down enough to get it pumping with the track. I then set a fairly long attack along with a RMS setting as there were no real transients I wanted to level out. I then set the make-up gain accordingly.

I turned off compressor #2 to give myself a wider and single midrange band as there was not any one thing to try to isolate in that region. Usually this is a good strategy as there are generally going to be instruments who's frequencies exist on both sides of the divide when splitting the midrange. In giving a single instrument different compression settings based on frequency, the outcome will usually be unnatural and difficult, if not impossible to remedy later on.

With the midrange compressor, I set it fairly consistently with the bass (I think this was a natural reaction to the kick inhabiting the lower-midrange as well as the low band). I tightened the attack up a little bit to hit the higher end of the kick a bit more and set the make-up gain accordingly.

For the high range, I wanted to clamp down a bit more on the snare and hi-hat attacks, so set the compressor to peak detection and set a rather short attack. Again, most of the other settings are more or less the same.

Although most of the settings are similar, using the multiband compressor rather than the the single band has yeilded me a far different and far more controlled result. I've been able to dynamically cut out much of the boominess of the bass, livened up the midrange and leveled out the high end; all independent of one another. 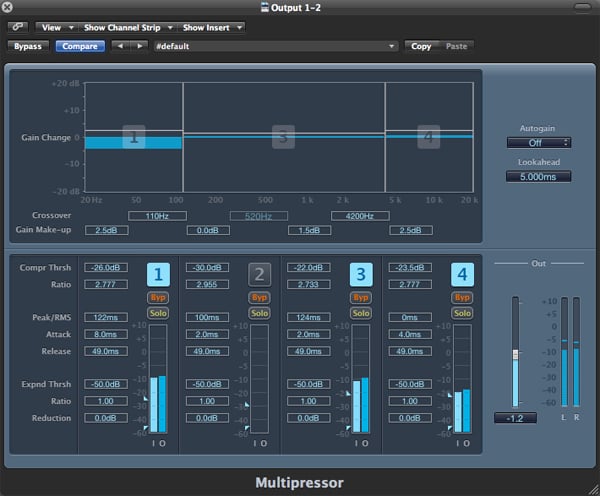 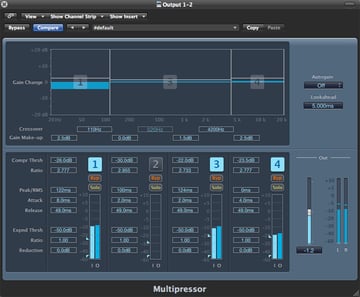 Here, I have added an exciter to the signal chain. An exciter adds subtle harmonic distortion to the audio which makes things sound more bright and crisp than otherwise (I often add this to the Kick and Bass to accentuate the attacks). It is not a necessary component, but I add it here mostly to show the fact that even though we are finalizing our mix, the option for subtle changes in coloration is not out of the question - even on the master bus.

The frequency slider on this plug-in determines the frequency range over which the plug-in will operate. The harmonics dial increases the intensity of the effect and the coloration options give a choice between two different types of distortion. The input button, when off, cuts the input signal and outputs a 100% wet signal to aid in hearing exactly how the audio is being manipulated by the plug-in. 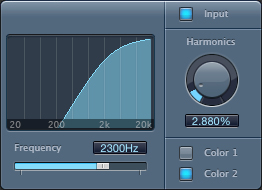 Here, I have dialed in a very modest amount of harmonic distortion in the mid-upper range using the second coloration option. This has added a bit of sheen to the entire sound and can really be heard in the added snappiness of the snare.

The Exciter mixed with the input.

In the next mastering subsection (and final portion of the series), I will go into master bus EQ, reverb, limiting, and what exactly goes on during final print.