The drums are the foundation of a great mix. You can be adventurous with the guitars, making them sound off the wall and unnatural, but if the drum sound strays too far off the path of punchiness, you'll end up with a lackluster mix.

Given that we know how to mix levels and pan the drums, there are really only three things you need for a great drum sound: EQ, compression and reverb, but the ways that you use these three processors is what shapes your drum sound.

Problem: Drummers don't hit the drums equally hard. But the listener wants consistency in the drum sound. Solution: Using compression to steady each hit so that every drum hit is more or less at the same volume.

A good starting point on most drums is a compressor that's compressing just a few dBs, with a medium attack and a release in time with the song. Start with a ratio of 4:1, you still want some dynamics but you also want consistency in the hits.

Also, using different compression models can result in different sounds. Switching between a slow optical compressor and a fast VCA model can make a lot of difference to the overall sound of the drum. If you have different compression plug-ins, take them all for a spin and see which one you like the most. One isn't necessarily better than the other, they just sound different.

There are three simple steps to EQing a great drum sound.

Drums can sound inherently boxy. Annoyingly even. And those boxy frequencies reside in the mids, around 400 Hz or so. Maybe a little lower, maybe a little higher. But if you boost the mids, scan the spectrum and cut when the boxiness pops out, you've immediately made your drums sound better. Just by cutting the mids you've subjectively boosted the lows and highs, since the spectrum now looks like it has more lows and highs than it does mids. 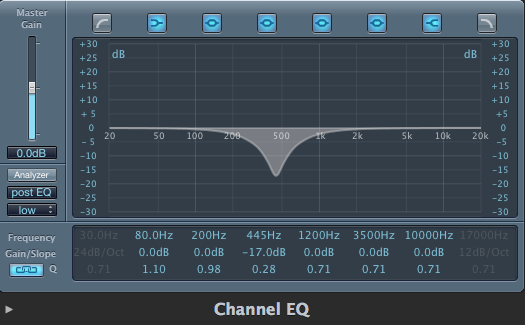 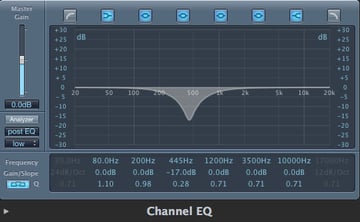 If you still need extra power or point to the drum, keep following the steps. Point is what's sometimes called attack on toms, click on bass drum or crack on snare. It's the high-end of the drum that compliments the low-end power of the drum.

Similarly, the low-end follows the same path. The lower the drums, the lower the “power” frequency of the drum is.

Step 3 - Use a Master Reverb

A master reverb on all tracks is a great way to give the drum kit some depth and space. Send all of your drums to the same reverb, and use the sends to balance the amount you want for each drum.

Leave the kick drum relatively dry, but add more reverb to the toms for instance. Which type of reverb you choose depends on the song you're working on, but I've found a nice drum room patch always gives me just the right amount of depth without cluttering up the mix itself.

Lastly, if you find your drum sound lacking a little punch, parallel compression is the way to go. Parallel compression is just another way to use your compressor. Now, instead of connecting it to every separate drum track you're creating a punchier sub group that you mix in with your clean drums.

Following these simple steps, compressing the individual drums, EQ'ing the lows, mids, and highs, and adding the drum group to a reverb as well as a parallel compressor I've created a tighter, and punchier drum mix.

And then listen to finished product here:

Follow these simple tips whenever you're mixing drums and you'll get an amazing drum mix every time.