We all know that writing and producing music takes a lot of work. From coming up with the initial ideas to making everything sound great, hours and hours of labor go into the process. Rather than putting yourself through the struggle of staring at a blank page or session every time you want to write something new, use these tips to get more mileage out of the music you've already poured your heart into. 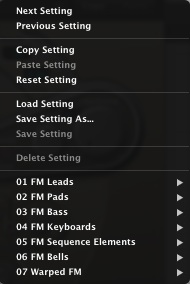 You spent all that time creating that perfect synth bass, so put that effort to good use and save it as a preset. You should do this for all sounds that you've created yourself, but it's just as useful to do for factory patches that you think you could find yourself looking for again.

Try to keep your presets organized in an intuitive way and name them as clearly as possible. Use more words than you think you'll need, it can never hurt to provide plenty of information. In an inspired moment of creativity when you know JUST the sound that would be perfect for that next verse, "Sculpture Deep Pluck Bass" is going to jog your memory a lot better than "Bass3". Adding an abbreviation of the song or film title that the patch originally came from is also quite helpful.

I suggest that Logic users save their presets via Channel Strips rather than just in the software instrument itself. It's much easier to look under the "Bass" section in an organized list of Channel Strips than to try to figure out which synth it was created from in the first place. 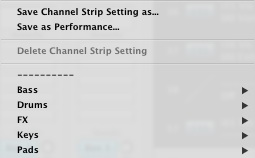 If you spend 3 minutes going through your session and saving presets of any new sounds you've used, you'll start building a nice personalized sound library for yourself. Of course you don't want to become too dependent on using the same patches over and over, but being consistent in your palette can help as you develop a personal style.

I already talked about how to Create a Drum Loop From Found Sounds, which can add a nice personal touch to your music. So why not save that loop and use it as much as possible? The easiest way to do this is to bounce it to an audio file, using logical and crisp start and end points. You want your file to loop seamlessly, so be careful about reverb, delay, or any other effect that could cause the end of your loop to sound like it got cut off.

Like our presets, proper naming is crucial. Besides a few descriptive words about what the loop is, you should include the original tempo the file was created from, making it as easy as possible for you to make adjustments for the different tempos of other songs. "Garden Tools Industrial Loop 86bpm" should be descriptive enough for you to remember what that was.

Logic also has the incredibly useful Apple Loops feature. Select the audio file that you want to be the loop, then under Audio choose "Open Apple Loops Utility". With this utility you can enter information about the loop such as a name and tempo, and also tag it by instrument, style, etc. 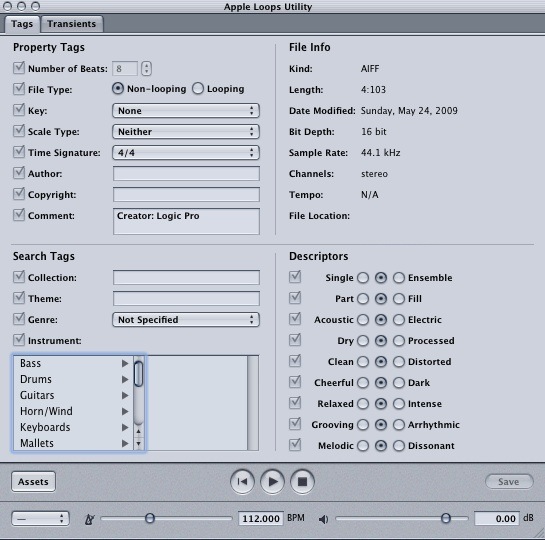 One of the wisest investments you can make after finishing a song is to take the time to print stems of your final mix. "Stems" are simply audio files of each of the individual elements used in your song. They give you a lot of freedom for ways to change or reuse your song in the future, such as adding or replacing elements or doing an entirely new mix.

Let's say that you wrote a song that you were pretty happy with, but that so-so lead vocal performance always kind of bugged you. Three years from now you finally decide it's time to replace the vocal, but the session was created in Digital Performer and you're on a new computer and use Cubase. Being able to simply drop in the stems from your session and sing a new vocal track will be a life saver compared to trying to figure out how in the heck you're going to get that old session to convert.

It's up to you how much you want to break up your stems, the thing to keep in mind is "What would be useful?". Generally if you have three different synth pads but they all serve the same function, it would make sense to group them into one stem. But if you've got a group of percussion that keeps the groove going while other percussion does big hits and swells, it would probably be more useful to have those split up. If you decide to reuse the materials in some new way, it would be a lot easier to loop the percussion groove without having to figure out how to get the big crash off of there.

Of course these stems don't have to be used only for future renderings of the particular song they came from. If you laid down a solid rhythm guitar take, is there any reason it couldn't come in handy on a future track? 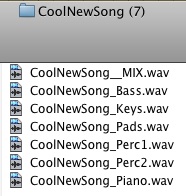 There are a thousand ways to tell a story, and just because you wrote a cue one way doesn't mean that it can't be expressed in another. Although this tip may be especially useful for film composers, there is a lot of potential for songwriters to find new and interesting things to do with their songs.

If your song is an upbeat rocker, what would happen if you cut the tempo in half and made it a ballad? If it's in a major key, what new and interesting ideas do you get when you put it in minor? And wouldn't that introspective acoustic guitar driven love song be cool as a big band swing track? Change one aspect of your song, and all of a sudden you have an entirely new piece of music on your hands. You can do a dozen different versions of the same song that are completely unique and interesting in their own way.

If you're a film composer developing ideas for your latest score, this technique is critical. If you finally come up with that perfect main title theme, take that extra few days to really develop your material before moving on to other cues. If you can really dig into your piece and discover the emotional opportunities early on, you'll have a toolkit ready to go that can make scoring the rest of the film a cinch.

What would happen if you gave up a little creative control and let someone else take over for a while? There are a lot of very talented people out there that do remixes and remakes. Artists like the Postal Service have had great success by collaborating without even having to be in the same room together. This is a great opportunity to put those stems to use; send them off to someone else and give them the freedom to chop up, transpose, add to, remove from, and remix your song to their hearts' content. Often you'll be completely surprised by the unique ways they handled the material you gave them and will have something completely new and fun in your repertoire that you never could have come up with alone.

Handing over your precious music to someone else can be a nerve-racking experience, but when you're dealing with a song that you've already finished you don't have to take it too seriously. You have the assurance that whatever comes out of the collaboration is going to be an "alt version", and you don't have to do anything with it if you don't like how it turned out.

Ask other musicians you've worked with if they'd be interested in collaborating, or you can always try Craigslist or any of the music collaboration sites like Kompoz or eSession.

A song doesn't have to live in isolation just because one version of it is "finished". If you've found creative ways to get a longer lifespan out of your music, share your tips in the comments!

On a related note, check out Ryan's Audio Plus tutorial on creating a template for your workstation software. Just as you can reuse presets and loops from your previous songs, you can reuse your favorite DAW configurations, too.