6 Creative and Alternative Uses for Sidechaining

Sidechaining has been a popular tool amongst engineers for long time. I have covered the basic methods for achieving the effect in a few popular DAWs, including Logic, Cubase and Reason but let's take a look at some real world examples of how we can use the technique.

Many people use sidechaining as a way to make their tracks pump in time with their kick drum or to lower the level of music when a voice is present, but there is so much more we can do with the process. So let's get into it and see what can be achieved... I have used Logic 9.1 for these examples but any DAW that features native sidechaining can be used.

I have supplied all the examples used in this tutorial in one Logic project that should load on any system. All though the parts used will play together in tune they are really meant to be auditioned in isolation, so each step uses its own buss and is clearly labelled.

Using side chain based compression is a great way to make your drum parts a little more dynamic and interesting. You can also use this method to create more realistic clutch and choke effects.

Let's say you have a running 16th high hat pattern, this maybe programmed or it could be a loop and you want to introduce some open high hat elements to the pattern. These extra hat sounds can often get lost in an already busy sequence or loop, of course you could go through removing the closed hats manually from the original sequence to create space but sidechaining can offer a better solution.

The two hats mixed in their dry state.

By using a side chain capable compressor on the original closed hat pattern and routing the new open hats to the key input, the closed hats 'duck' every time the new hat sound plays. This not only gives the open hat sound the space it deserves but also gives you a very organic sound, something that is very difficult to achieve with programming alone.

With the routing set up you should start to hear the original hat line ducking when the open hat appears. It's now just a case of deciding how much reduction you want to occur and fine tuning the release time to match your projects tempo. 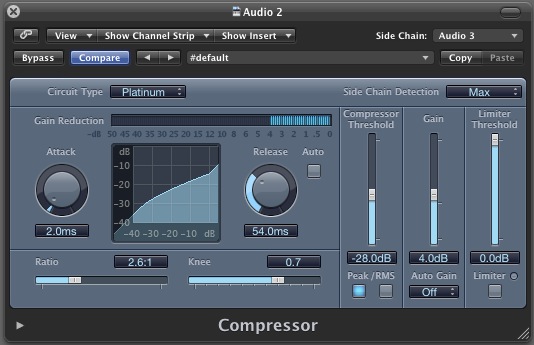 The compressor with tweaked settings in action.

The two sounds in the mix.

The two hats with the ducking effect applied.

When it comes to utilising sidechaining with drum parts you aren't just limited to high hats, you can literally route any sound in your composition to any other. This can create complex dynamic relationships between the elements and give your overall mix a more cohesive feel.

For example try using a snare or percussion sound for a fill or variation during a transition in your arrangement. Then apply a side chain compressor to the rest of your drums and percussion. The new snare fill will cut right through the mix and when mixed the effect will create an aggressive feel.

When using any effect with a tail (i.e. reverb, echo or delay) there is a always a danger of muddying a good mix. There are times when a really large reverb or delay are called for and with the use of side chain compression we can generally use these larger than life effects, without detrimentally effecting our mix.

To use this technique we first need to set up a send / return routing. The compressor is then placed on the return channel or buss. The key input for this compressor can be any element in your mix, traditionally the kick drum or drum group would be used but things get a little more interesting if alternative sources are used.

The guitar part we are going to treat.

Try using the actual signal that you are effecting as the key input. for example if you are effecting a guitar solo you can try using this to cause the ducking on your effects bus. This will allow your guitar to pass through the dense effect without being too confused. When the part stops the effects buss level will rise allowing you to hear the reverb or delay you are using.

The routing and effects set up.

The guitar lead with delay but no ducking.

This technique is great for lead lines, guitar solos and generally anything monophonic in nature. Real definition can be added to parts even when very intense effects are being applied. Also experiment with using other random elements from your mix as the key input on the effects buss. Sometimes the results can be quite surprising.

The guitar with ducking applied.

If you are producing electronic music with a number of different synth lines, or rock music with multiple guitar parts, it's likely that these instruments can be fighting for space. Ducking can be used to create spaces for these sounds to live in and enable them to be in the mix at the same time.

Two synth parts that currently clash to some degree.

Simply choose one of the sounds as the one that will be compressed and another that will act as the key input. It's a good idea to use a sound that is only used for small bursts as the key input, this way your 'main sound' will be ducked when it appears.

The ducking set up used to define the two sounds.

The two synths with one part ducked.

The same effect can be used to duck a rhythm guitar or pad sound when a more prominent lead is playing. Again it's all about control and making space. These methods can really lead to a cleaner more intelligible mix.

Often when I'm using loops, I'll love the overall feel and impact the loop adds to my project but it will often clash with my other percussion and drum parts. This clash will more often than not occur every four beats in time with the kick drum, or at least on the second and fourth with the snare.

These clashes are due to the fact that a lot of sampled loops and percussion grooves already have either kicks and snares, or heavily accented elements at these timings. If you really want to use a loop in your track and you are having these issues, sidechaining can help.

Simply add a compressor to the loop and use the kick as the key input. The loop will now duck in perfect time and with some careful adjustment you should be able to make the gain reduction pretty transparent. The elements on the kick drum will be reduced and everything else will be audible.

The kick drum and loop with no sidechaining applied. 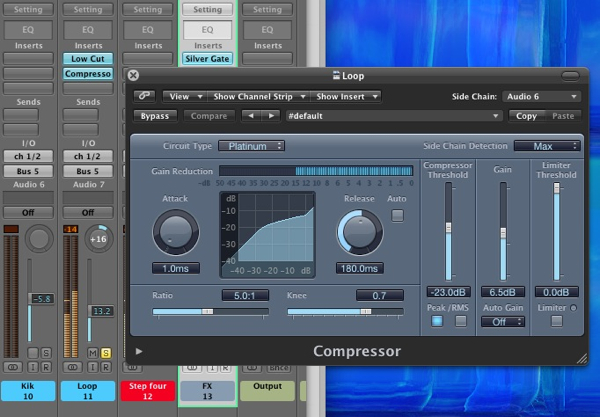 Using ducking to prevent confusion with a busy loop in the mix.

The two elements with ducking applied to the loop.

Step 5 - Using Gates With a Side Chain Feature

Other plug-ins apart from compressors are capable of accepting a side chain input. This varies in every DAW, but in most applications noise gate plug-ins are side chain capable. Very different results can be achieved when using sidechaining in combination with a gate plug-in so lets take a look at one example.

Let's say you've got an effects sample and you want to add a bit of life to it. Add a gate plug-in to this track, the settings can be left in their default state for now. Now take one of your drum or percussion parts that represents the groove of your track well and use this as the key input for the gate plug-in.

Now when you bring up the threshold of the gate you should start to hear a rhythmic pattern evolving. This is really a perfect technique for adding extra groove to a sound and also giving your drums even more space in the mix. 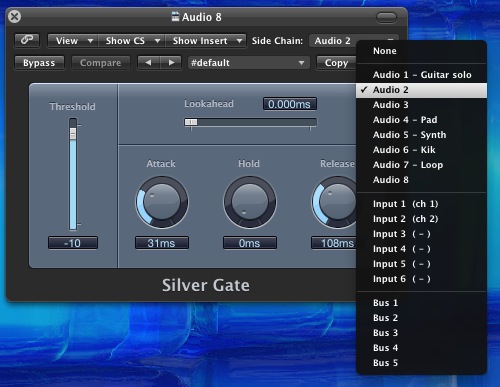 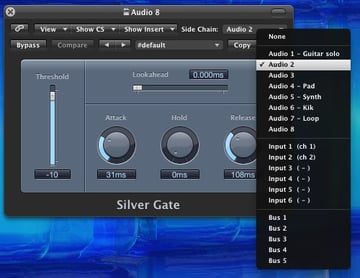 You can even try programming a percussion part especially for the purpose of creating your rhythmic gate. Once the effect has been initiated you can also mute the percussion part. This means you can apply custom gate patterns to any sound without the actual key input being present.

Step 6 - Filters and Other Special Effects

There are other plug-ins that support sidechaining, again this varies from app to app, so check your manuals. Common ones are filters, vocoders and some multi-band processors. You may find that some of your soft synths will take a key inout as well. This means you can transform these instruments into super effects processors and utilise their synth engines to mangle your audio.

If your DAW supports native sidechaining as standard, its worth checking third party plug-ins to see if they feature a key input. For instance Fab filter's Pro C compressor is an excellent alternative to your native compressor when it comes to ducking effects and offers quite a few more features than most stock compressors. 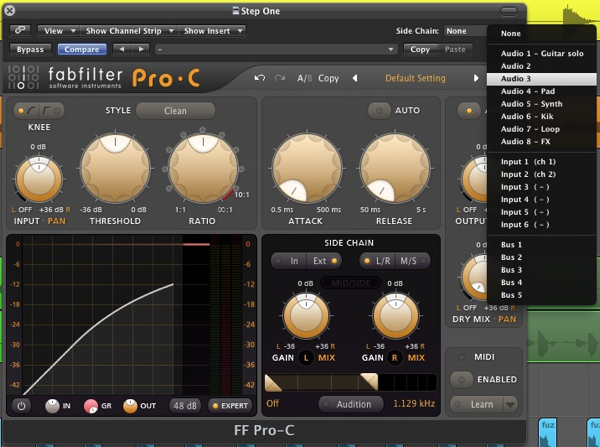 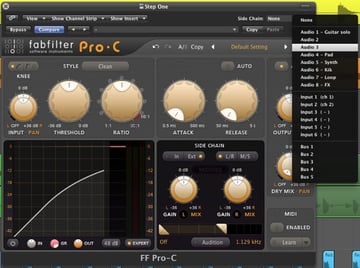