A Basic Guide to Mixing and Mastering

Mixing and mastering are the two base components of professional producing. Do you have a home studio and do you want to record your own instruments, such as the guitar, the piano and the drums to make an awesome track? This article provides all the knowledge considering mixing and mastering that you'll need to produce your very own track!

Why is Good Mixing and Mastering Essential

First of all, let's start by explaining what exactly mixing and mastering is. The first term, mixing, refers to the process of putting multiple layers of audio together to make one final track, or to musically modify an existing track. The second term, mastering, refers to the process of optimizing the final track using all sorts of different mastering elements such as compression, equalization, stereo enhancement and more.

In this article, we'll spend quite a bit more time on the mastering as we will discuss several mastering processes like compression and EQ. Now, let's take as example me having recorded a track in my home studio. I've recorded the guitar, the piano and the drums using my digital condenser USB microphone onto different tracks in my sequencer software Cubase.

As I simply layer the tracks and play the song, the sound is quite undynamic and flat. What I can now do, is mixing. I can change the volume of an audio track at a certain point to make e.g. the guitar come out more clearly at a specific moment. This is the mixing of the track, the layering of the audio and the volume determination. Also, unwanted noise and clicks are removed in the mixing stage.

Now, the track will sound better but there's still quite a lot of work to do. It's time for mastering. By mastering the track one can really bring a track to life and spice up the sound. You can make the drum more dynamic, the guitar more or less sharp sounding, the piano more soft and you might want to boost the bass frequencies of the piano a little bit as there is no bass.

This is an example of mastering, which one does to spice up the track and make it sound way more dynamic. Below, you can here an example of a track that I've recorded. The first audio file is a raw recording, the only thing that I've done is layering the instruments. The second audio file is that same track, but now mastered. Compression, equalization, stereo enhancement and reverb effects are applied. You can certainly here the difference as the second track sounds quite different.

Now, this is how it works: when recorded audio is too loud and exceeds the decibel limits the compressor takes the peaks of the audio and compresses them so that they will stay within the limits and therefore won't be to loud. However, it also takes the very soft part of a track and boosts the frequencies. Eventually, you've got a track with an average waveform and the soft parts are being boosted and the loud parts are being reduced in frequency and therefore in volume.

The problem with compression is that these days a lot of people really don't know how to work with it. When one simply puts a compressor on a track then everything will stay within the volume decibel limits. However, it also really flattens the audio and takes away the soul and dynamics of the music.

When one plays a really emotional piece of the guitar, for example, and then on the end a louder part, then the compressor will make the first part louder to make everything have a common average decibel level. This takes away the emotion in the sound and therefore one should reduce the compression. In modern music, a lot of albums are very loud and undynamic: this is called the Loudness War. These days, it seems that most people are trying to put as much decibels within the dynamic range as they can. This will often result in an unemotional, undynamic track.

Equalization is the boosting of specific frequencies of a sound. Two examples of EQ interfaces in Cubase are: 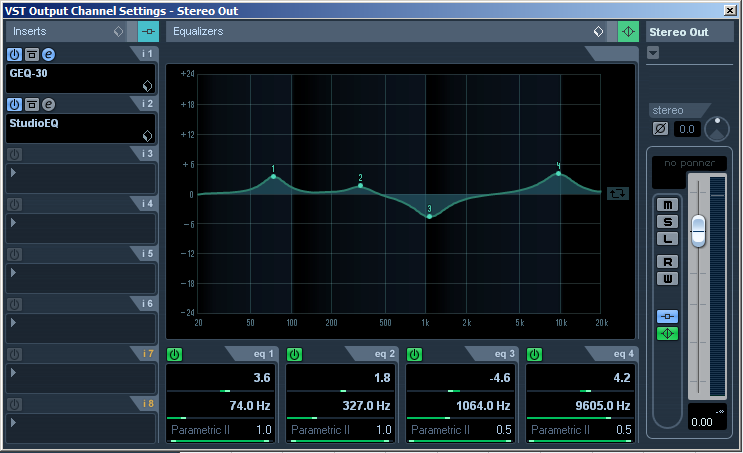 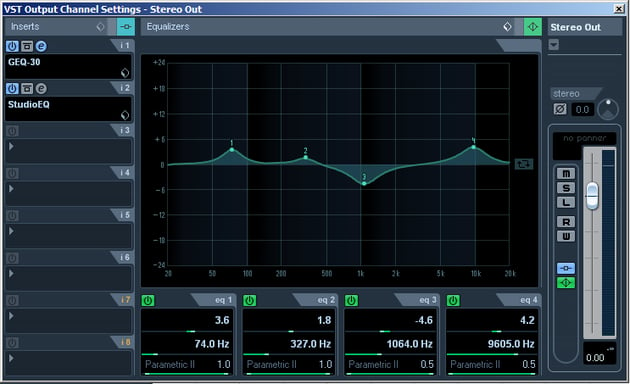 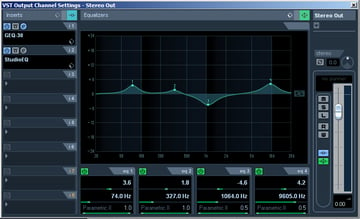 In the first image you can boost a specific frequency using a slider. In the second image you've got a visual representation of all the frequencies. Now, EQ is very easy to understand. When you've recorded a track with e.g. a bass drum, you don't want it to sound thin and you want it to have relatively more bass frequencies in it. With EQ you can boost the bass frequencies, for a bass drum often between 100 and 300 Hz, so that you can get the sound that you want. EQ allows you to get the perfect sound that you want for an instrument and often in recordings all the instruments are being equalized.

Below, you can here two audio files: the first one is a guitar and then a drum without EQ, the second audio file is the same but then with EQ. Notice the difference and that the second track sounds more vivid and warm.

As I said, EQ is quite easy to understand but hard to apply. For most instruments there are a zillion kind of sounds that you can create using EQ. However, you should consider two things. One: does my sound fits within the timbre, the characteristic sound, of the instrument? And two: does my sound fits within the track? Now, there aren't any rules for proper equalization, and you've just got to judge the sound by ear.

Below are three the same audio files, but with different EQ applied to them.

Aside from the two most important things, compression and equalization, there are more effects that can help you spicing up your track and get the most out of the sound. Below are some effects that will help you getting started. 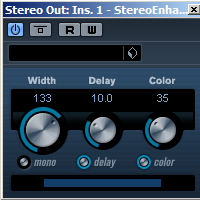 Stereo enhancement is quite simple. Normally, music or sound is being played trough two or more speakers. Most computer speakers and all headphones have to speakers: stereo. The stereo enhancer will simply distribute the sound over the two speakers so that there won't be coming any more sound from one side. This gives the track a natural effect as people have two ears.

There are also stereo enhancers that allow enhancement for 5.1 surround sound. You can play with different settings such as the width, delay and color.

Reverb is basically echo. When you apply reverb to an audio track, an echo will be generated. This results in a more realistic sound. Especially mockups made with virtual instruments extensively make use of reverb, as virtual instruments often sound quite dry.

However, also on live recorded tracks reverb can be applied. This will give the track a more warm and natural feeling but again, just as most of the other things that we've discussed in this article, you really need to know how to work with reverb and make sure that you don't apply too much. Also, different instruments need different reverb times.

Now I won't be talking about all the additional effects right now because there are a LOT. Basic ones are denoisers, amplifiers (usually for guitars), tuners and more. Just go through you're software's effect list and you'll see that there are a lot of effects to spice up your track.

Although a track may sound good right from the beginning after layering the elements, a lot of people make the mistake of not making any improvements from then. Really, there are so much improvements that you can make with effects like compression, EQ, reverb and additional effects. Just be sure not to produce the track until you've got the ultimate sound that you want.

Thank you for reading this article and I really hope that I've inspired you to get creative with mixing, and mastering.

Hugo Tromp
Hello, my name is Hugo Tromp and I'm a 3d artist. I love working with 3ds Max, but I also work with software like Maya, and Photoshop for postproduction. I've been in the CG world for 3 years or so, but I enjoy every aspect of modeling, animating, and compositing, and always strive to stand out and be creative!
Looking for something to help kick start your next project?
Envato Market has a range of items for sale to help get you started.