This screencast is the first tutorial in a series on synthesis. This first installment shows a basic guided tour of Subtractor in Reason and covers oscillators, filters and envelopes.

This is really aimed at the beginner who is relatively new to subtractive synths or people just starting to program their own patches. I've tried to keep the videos a little shorter than previous offerings but I have to apologise for any heavy breathing you might hear in the later stages - my boxer Alfie decided to come and sleep in my studio!

Don't worry if you don't own Reason as I have constructed the same sound in a couple of other synths: FAW's Circle and Logic's ES2. Hopefully this will allow the majority of people to follow the series.

The Patch in FAW Circle

Here is the patch in Subtractor and also recreated using Future Audio Workshop's excellent 'Circle' synth. While these recreations won't sound identical, they should give most of you a chance to load the patch up.

You can download a fully functional demo of Circle here.

The patches for each of these are available for download in the play pack below.

The original patch in Subtractor. 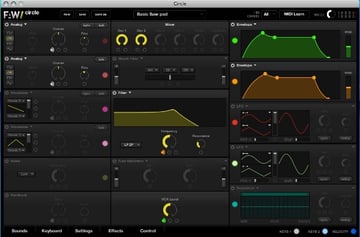 The patch recreated in FAW Circle.

Here is the same patch, but this time in Logic's ES2 synth.

The patch recreated in Logic's ES2.