Get five mixing engineers in a room and they will probably give
you five different tips on mixing your drums. Some want it au natural,
making it breathe and sound live. Others want it pumped in your
face with crushed compression kicking you to the ground. And many
like the happy middle, applying compression when needed but still
retaining the natural feel of the drum kit. No matter what your
preference is, there are certain guidelines that are good to follow
when starting to mix your drums.

In the following tutorial I'm going to walk you through the
basics of mixing together a drum kit. We'll be taking a few bars of
multi-tracked drums, mixing and sculpting with various things like EQ,
compression, levels and panning before we get it sounding just right.
Take note that these tracks are hard rock drums, and I will be mixing
them in that genre. That means that I will probably apply more
compression than you purists think, and I will EQ to get a proper
rock sound instead of a natural sounding jazz sound for instance.

Ok let's dive in. This is what we're working with.

A few bars of a decently recorded drum track, maybe a little roomy
but nothing we can't make sound great. 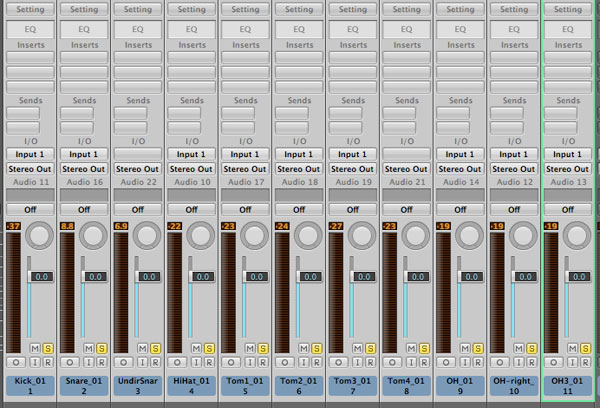 11 drum tracks. Some would argue that's too much, some would argue
that's way too little. I think Metallica's black album was made with
around 30 microphones just for the drums. But I wouldn't know where
to start a tut if we had 30 microphones to work from. So we just have
the bare essentials.

I'm having every track at unity gain (0.0 db) in the screenshot
above, but there are a few methods for getting the correct levels. I
like getting the overheads into the mix first before I tackle
anything else. Getting them at a good level and then adding other
elements into the mix is an easier way to gauge the effect each track
has on the overall mix. Let's pull everything down except the
overheads.

By listening to the overheads we get an overall feel for the
drum kit. We can hear every drum, although it lacks all of it's punch.
I also pulled down the room mic since we'll have a different role for
it later on.

Now let's add other elements into the mix. Starting with the kick
and snare we move the faders up until they are loud enough to fill in
the punch we need from that specific drum without being way louder
than the overheads.

Now we have a pretty good level on the kick, snare and hihat. The
kick gives a nice punch to the track, while the combined faders of
the snare give a nice cracked accent to the dull snare that was
present in the overheads. But there might be something wrong with the
snare? If you are mixing tracks that you didn't record then you
always have to keep phase relationships between instruments in mind,
and seeing as the snare has two microphones, you wonder if they are
in phase. Let's check. 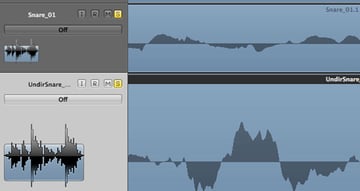 By zooming in on the two snare tracks you can see black on white
how incredible out of phase these two tracks are to each other. We
want the waveforms to go in the same direction and complement each
other, not in the opposite direction and cancel each other out. There
are various ways to flip the phase of a signal but I'm going to
Logic's sample editor and flipping the phase on the bottom snare
microphone. Double click the region and the sample editor pops up.

Go to FUNCTIONS>INVERT and Logic flips the phase of the whole
waveform for you. We want the two waveforms to go up and down in sync
with each other and now it looks much better. And sounds better too! 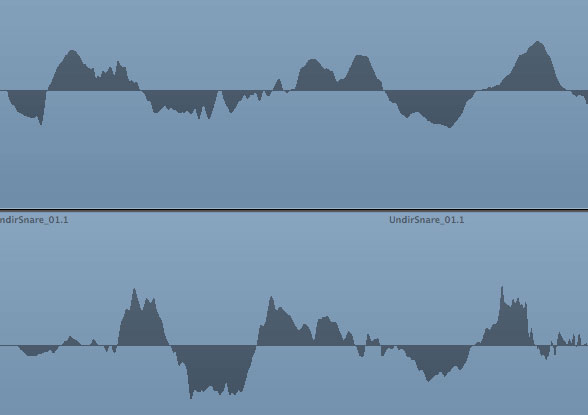 Now let's solo these two snare tracks and listen to a before and
after sample. Before phase reversal:

And now hear the snare in phase. A much thicker, fuller sounding
snare:

To finish off getting rough levels let's focus on getting the toms
right. I'm soloing a area where the drummer hits the toms and getting
those specific hits loud enough in the mix without making them jump
out.

Now that we've gotten our rough levels, it's time for the
next step. Since drums are a stereo instrument and tend to fill up
the entire stereo spectrum, we need to put them in stereo. We
can't have all the drums panned in the center. We want to spread the
drums out a little bit and feel like we are watching a drummer play
in front of us.

A note on perspective: Some
people like to pan from the audience perspective, and others like to
pan from the drummers perspective. Meaning that when listening to the
drums you either feel like you are behind the drum kit playing it, or
sitting in front of it watching it.

Since I'm an awful drummer I'm
panning from the sound engineers perspective. That means that the
hihat goes on the right, the overhead above the ride cymbal goes to
the left and the toms roll from right to left.

The general rule is that kick
and snare stays in the middle. Kick and snare is what drives the beat
forward and thus it needs to be anchored in the middle of the stereo
spectrum. Some people pan the snare a little to the right, or maybe
just one of the snare mics to the right, but we'll be keeping it in
the center.

Take the overheads and pan them hard left and hard right,
filling out the edges of the spectrum. This is what will give our
drum kit width in the mix as by panning those two elements across the
entire spectrum we automatically position each drum relative to
itself. But since we have more elements to play with let's pan the
rest of the drums.

That sounds a little more realistic
now as we get the feeling of more depth to the drum tracks. Go back
and compare this tiny level and pan change to the original
unprocessed track and see how radically different it has become by
only doing a tiny bit of processing.

You might have noticed I was
leaving the room mic out of the equation completely in the last few
steps. The fact is that it's a room mic recorded in a not-so-great
sounding room, but it can illustrate a point that many engineers use
when recording drums.

Metallica's 30 drum microphone Black album
wasn't recorded with all of the mics close up on the kit. Many of those
microphones were positioned around the room, capturing sweet spots in
the acoustically treated drum room. That's the reason Enter Sandman
sounds so huge, cause it has all these microphones capturing the huge
sound the drum kit makes in a big room.

But we only have one room
microphone. So let's add him in gradually so you can hear the
difference a room mic makes to the sound of a drum kit. Keep this in
mind when recording, as a few room mics might come in handy for
various mixing tricks down the line. 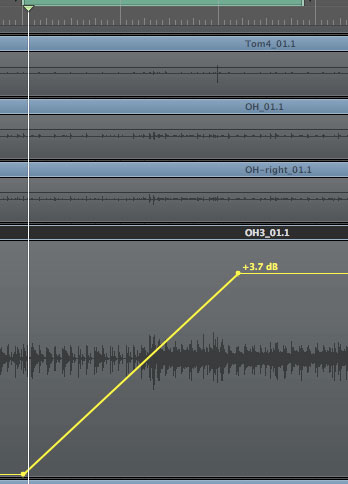 As you can hear in the audio
file below, there is a radical increase in sound whether we are using
the room mic for ambience or not.

Some recording and mixing
engineers choose to use their room microphones for reverb, choosing
not to use digital reverb engines because they prefer the sound of
their recording room. Whatever you choose to do, it's always good
practice to have one or two mics as ambient room microphones. We'll
come back to this microphone next time, as I have a separate function
for this microphone that has nothing to do with reverb.

Stay tuned for the next
installment in the the guide to effective drum mixing. We'll be
continuing to look at what comes next, namely equalization and
compression. We'll be learning to equalize correctly, enhancing the
fundamental sound of the specific drums as well as cutting out
unwanted or unattractive frequencies. We'll be looking at some
examples of compression, the New York Compression trick as well as a
few other mixing tips you can use to spice up your drum sound.